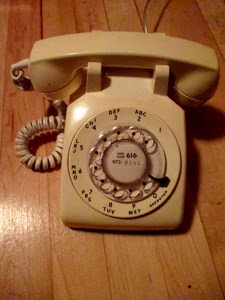 
When we were at Disney World earlier this year our biggest laugh came from when we were setting up our Fast-Pass choices at the special kiosk (in Tomorrow Land no less).  When the guy pulled up the screen displaying our time windows to remember he said, "Now just get out your smartphone and take a picture."  My kids cracked up.  I told the guy I didn't have a smartphone, and he looked confused and said they could email it to us as a text, and I told him that wasn't going to work either because I don't text.  He seemed really at a loss at that point, and I told him not to worry, that I had this cool thing called  "paper and pencil" and that worked just fine (particularly in the rain).

Quinn looked at the Disney worker and said, smiling, "We live in the past."

Now, I've told my children that if we get to a point where they feel left out to an uncomfortable degree because they are of a generation that texts, etc. and they feel they are at a social disadvantage, we aren't opposed to getting them gadgets at some point.  But they are surprisingly fine without them.  They say they like living the way we do.  They are content to use a Wii at a friend's house or only have a handful of free apps on their iPad.  Currently they don't want cell phones.

That will change.  It will have to as they wander farther out into the world without us and we need to stay in touch out of both safety and convenience.

But in the meantime we are putting it off.  I'm sure when I finally have a smartphone I will wonder how I did without like everyone else around me, but you know what?  I think that's what scares me.  I don't want to be as dependent on an optional device as others around me appear to be.  I don't like the behavior I see associated with smartphones.  I don't want to become that.

I read a lot of articles criticizing young people for how they use their phones, but from where I'm standing they are simply following the lead of their parents.  Many of the adults around me anymore cannot keep their eyes off their phones.  They act addicted.

I'm sure texting is enjoyable, but I'm stunned at how pervasive it's become to a point that when people discuss the dangers of texting and driving most of the responses I see in Facebook threads come down to, "Yeah, but it's so hard to stop."  The concept boggles my mind.  How anyone thinks they can drive safely while being distracted with a device that requires fine motor skills, eye-hand coordination, and conversing with someone in a different environment is insane.  How strong is the texting allure that people can't resist it even when it puts themselves and others in danger?  I don't think I want to know.

So many people seem incapable of getting through any real amount of time without checking their phones.  It's insulting to share a meal with someone who finds whatever trivia is flickering across their tiny screen more interesting than you.  It's a big deal anymore if someone makes the gesture of actually shutting off the phone to pay attention to something.  I get that smartphones are cool and have great uses, but they've invaded everything.  I find that unnerving.  It's also peculiar that people treat smartphones as indispensable when some of us do without them just fine.

But I know I am the odd holdout on this front.  If other people enjoy this behavior then that's fine.  I just don't feel up to joining them yet, and I don't have a lifestyle that demands I do.  If I traveled, or commuted any real distance from my children, or had to be cut off from a land line or a computer during business hours, then it would likely be a different story.  But as it is at the moment, I have no need of a smartphone.

I actually apologized half-jokingly to my kids not long ago for being the weird mom who doesn't have a smartphone and they told me it was fine.  Mona actually said, "We like being weird." 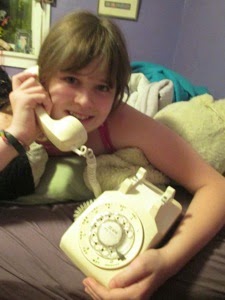 So that's where we are right now.

I'm sure our texting days are coming, but in the meantime I'm kind of proud of my kids for writing actual letters to their friends and developing verbal phone skills.  I know a rotary phone doesn't exactly make us Amish, but it's enough of a throwback I find it oddly touching.  Something about my oldest baby's sweet face lighting up that she gets her own phone with a dial and handset with a curly cord just makes me happy.

(Now if only we could count on one day finding colleges for the kids with retro tuition we'd be set!)