Mold-A-Ramas at the Field Museum

We're getting better at these little jaunts down to Chicago on our quest for Mold-A-Ramas!  We've hit nearly every site that has them in the Windy City.  Yesterday we went to the Field Museum. 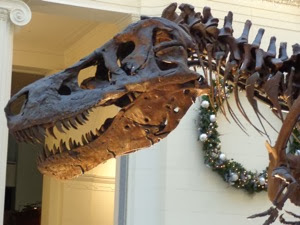 Ian stayed behind to help out at home, but I went with the kids, my mom, my brother and his wife.  I'd never been to the Field Museum before, and of my kids only Aden had visited on a school trip a couple of years ago.  My brother will be starting a position as an associate researcher there soon, so we're hoping on return visits to get a behind-the-scenes tour.  For this trip the actual, uh, in-front-of the scenes tour, was plenty.

The Field Museum was packed.  I don't know if the day after Thanksgiving was just a good family outing day or if it's usually that full, but I liked seeing so many people enjoying such a beautiful space and learning things instead of shoving people aside to buy cheap electronics (which is apparently our modern tradition and it depresses me to no end).  The staff at that museum right on down to the guy emptying the garbage cans was exceptionally friendly and nice.  Even the cafe food was delicious.  And our membership to Discovery World here in Milwaukee was reciprocal so we got in free!  All around, a great experience. 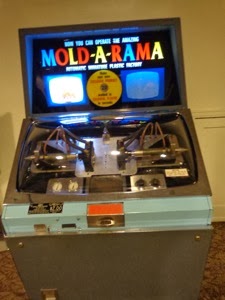 The Mold-A-Rama machines have seen better days, though.  There are four of them located on the ground level of the museum near a small gift shop and the McDonald's, so they get a lot of use.  They are scratched, and a couple of them were confused by coins and we had to resort to dollar bills.

But the figures themselves were terrific!  Four dinosaurs:  Triceratops, Apatosaurus, Stegosaurus and T-Rex. 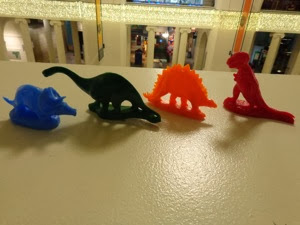 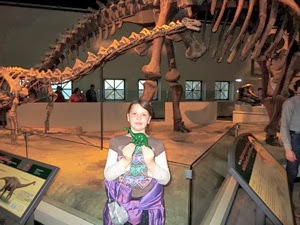 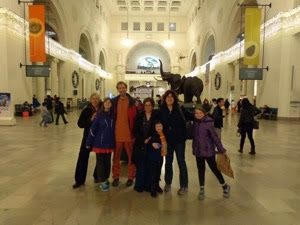 I'm looking forward to returning to the museum again soon.  We saw the mummy display, toured the dioramas by Carl Akeley (which included four different seasons of deer that my brother told us was very controversial at the time since people were concerned back then that deer were in imminent danger of going extinct), and walked the Evolving Planet exhibition.  We always enjoy a good natural history museum, but it's an amazing treat to get to tour one with my brother.  As a professional model maker he's created things for some of the greatest museums in the world, so his insights as we walk around and look at displays are fascinating.

The number of Mold-A-Ramas in our collection is now 44.  Which my children have reminded me is my age, and I told them when we reached that many I'd start working on a better display area for them.  Currently they are lined up on a china rail in the dining room, and even though they are getting pretty crowded there I think we'll have to stick to that for now regardless of what I said.  I'm not adding another project until after the holidays.

Besides, at the rate we're going, I'm not sure how many figures to plan a cabinet for.  We have one more place to get to in Chicago, and we're hoping to go back to the Brookfield Zoo to pick up their Christmas Mold-A-Ramas, but there are bigger plans afoot to more than double our collection in the new year.  Mold-A-Rama road trip!  Stay tuned!
Posted by Korinthia at 1:21 PM