Mold-A-Ramas at the Willis Tower, and Quinn Turns Seven

Quinn's recent birthday felt like that all day.  There were both figurative and literal ups and downs, actual dark clouds along with rainbows and tears.  It was exhausting, and not a birthday we are likely to forget.

When I asked Quinn a few weeks ago what he'd like to do for his seventh birthday he was ambivalent.  Since he could take or leave a friend party, I decided we should just stick with family and do something interesting.  I suggested a trip to the Willis Tower (still the Sears Tower in my heart) for a trip to the Sky Deck and to add the two Mold-A-Ramas they offer there to our collection.  He loved the idea.

My thought was that if we were going to make the visit to the Willis Tower for Mold-A-Ramas at some point anyway, may as well tie the overpriced experience to an important moment.  I figured every time we drive through Chicago in the future we will see that famous skyscraper and remember celebrating Quinn turning seven.  What could go wrong?

Well, the weather, of course.  We woke up to rain, and wondered if driving all the way to Chicago just to look at the inside of a cloud at 1,353 feet up in the air was worth the trouble.  With the Museum of Science and Industry as a backup plan we decided to chance it.

By the time we reached Chicago the clouds had broken up and we decided to the top of the Willis Tower we would go.  We parked several blocks away, enjoyed a windy walk downtown, made our way through several lines to buy tickets (Ian was free with his military I.D.!) and wait for an elevator, and then we were on the Sky Deck.

It really is amazing.  Pricey enough I doubt we'll do it again, but certainly worth doing once.  The views every direction are tremendous, and there are four glass decks that protrude a few feet out from the building so you can look down to the ground underneath you from where you are standing.  The kids all felt very brave. 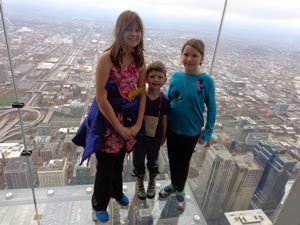 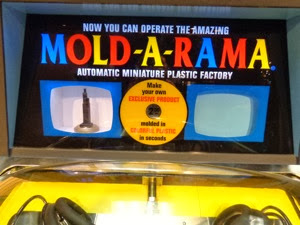 There is a series of gift shops in the Sky Deck experience, both when you arrive and when you leave.  The Mold-A-Rama machines are in the main gift shop by the exit downstairs.  If you collect Mold-A-Ramas and prefer not to pay to go all the way up to the Sky Deck to get them, I'm sure after you go through security you could ask a guard to walk you past the ticket lines and straight to the gift shop. 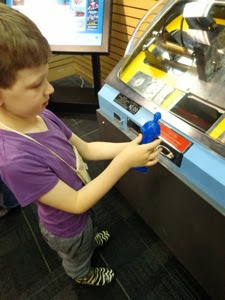 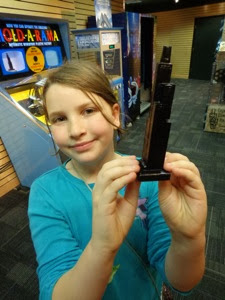 This brings our total number of Mold-A-Ramas up to 40, which is starting to look like an actual collection.  The Mold-A-Ramas were definitely a highlight of the day.

But then things took a turn.  Apparently we picked a day of severe storms for hanging out in Chicago.  It started to rain when we left the Willis Tower.  It was pouring by the time we reached the corner of Plymouth and Van Buren.  (Normally I'm not one to remember street locations, but it will be a long time before I forget Plymouth and Van Buren.)

That intersection is under the El, and rather than having all of us continue to brave the unbelievable amounts of rain, Ian offered to run ahead and get the car and we would wait for him in the relatively dry space on the corner.  He dashed off into the rain and was soon out of sight.

The kids and I looked at pigeons tucked in corners of the El above us.  We sang Happy Birthday to Quinn.  We kept ourselves entertained as everyone got colder and wetter.  Puddles started rising around us.  The rain began blowing sideways under the El.  Street signs twisted in the wind.  We huddled together and waited.  And waited.  And waited.

We found out later that the storm was so disorienting that Ian had gotten lost.  This is a first, so it never crossed our minds as a possibility.  We started to panic.

What do you do in a possible emergency in a strange city on a Sunday in a storm with three kids in tow?  I really wasn't sure.  I had to remain calm because scaring the kids wouldn't help anything.  I took them into a nearby Subway sandwich shop to warm them up and get them out of the rain, but I continued to stand outside by the street hoping to see our minivan turn the corner.  It didn't.

We got out my cell phone and called Ian several times, but no answer.  (He never heard his phone ring over the sounds of the storm.)  I wondered how long was too long to just wait there doing nothing.  I wondered whom else I could call.  I wondered if the car had been stolen or if Ian were hurt.  I tried not to wonder if watching him running away from us in the rain was the last time I would ever see my husband.

Eventually the rain let up enough I told the kids we should see if we could find the car ourselves.  If it was there we would wait in it, and if it was gone we would come back to our corner.  The problem was I wasn't entirely sure where to look.  The kids helped me spot certain landmarks (Aden remembered which way we walked toward the Public Library, I remembered passing a particular drug store....) and we made our way back to the general vicinity of the minivan.  And didn't see it.  So back to Plymouth and Van Buren we went.

I decided at that point just to feed everyone.  The plan had been to have lunch at Ikea, but I didn't know what direction the day was taking anymore and we all needed food.  I ordered sandwiches when we got back to Subway.  And then my phone rang.

I cannot tell you the joy on the kids' faces when they realized their dad was calling.  I don't know how to fully explain my relief.  Ian soon pulled up across the street in the rain, and we gathered up our food and piled into the car.

We were all so wet and so frazzled and so incredibly happy.  The whole thing surely felt longer than it really was, but we'd had time to imagine terrible things.  We'd been forced to consider the possibility of life without Ian.  It cut too close to how I lived both times he was deployed in Iraq and every moment of every day held a low level panic that he would die out there and never come home.

But Ian was not dead!  The car was not stolen!  Life was exactly what it had been before and now we appreciated that for all it was worth.  It was strangely great.  We were still impressively wet, though.  And we told Ian that we were never splitting up as a family for anything ever again.

So off to Ikea!  Where we had second lunch, bought lamps, and Quinn picked out a trio of toy mice as his present.  On the drive there we saw the most incredible rainbow.  It happened to appear during a stretch along the highway where there were no viewing obstructions, so it was just a giant complete arc with a pale double above it, and an interesting fracturing (with a tripling effect) of colors underneath the main arch.  It was intensely bright, particularly at the ends, to the point where it looked like a solid object.

It felt good to drive home.  We've found the drive to Chicago and back feels much faster if we read, and the book we started for this trip was The Neddiad by Daniel Pinkwater.  (Very entertaining, I highly recommend it.)  By the time the kids all fell asleep (and it was getting too dark for me to see anyway) we made it about a third of the way through the novel.

Back in Milwaukee we had cake.  Quinn said to surprise him with his cake like I did last year, so in honor of his upcoming recital I made him a piano cake.

Quinn opened presents and had the biggest reaction to a bird Mona made especially for him the night before.


Quinn ended his night by decorating cupcakes to take to school the next day. 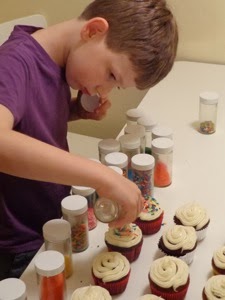 I can't believe that boy is seven.

And I can't believe that with all the all the problems we had with that storm in Chicago it was better weather than people were dealing with in Milwaukee.  When I checked Facebook that night it was all pictures of flooded streets and tales of spending the day in basements as the tornado sirens blared outside.  All those moments in Chicago where I was wondering if I should have just opted for the friend party only to discover if we had it would have been a disaster.  I suppose I could keep a gaggle of first-graders entertained in our unfinished basement while fielding calls from worried parents, but I don't really want to try it. 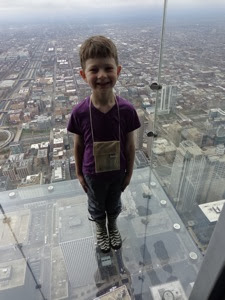 When Quinn came to give me one last snuggle before bed that night I asked him to name me the seven best things about his day of turning seven.  First was his piano cake.  Second was adding to the Mold-A-Rama collection.  Third was Mona's bird.  After that it got a little blurry with the rainbow and being glad dad was not dead and the cool maze books his grandma sent him, etc.  I asked him, "Did you like the Sky Deck?" and he replied, "Oh, sure."  So there's that.  I think he was more pleased with the old passport pouch I gave him before we left for holding his Mold-A-Rama change (which normally falls out of his pockets).

An odd mix of a day, but overall a good one.  We're lucky that the good luck/bad luck balance continues to tip in our favor, sometimes when we don't even realize it.  Our next birthday and Mold-A-Rama adventure is scheduled for when Mona turns ten soon.  I'm hoping for a little less drama and a lot less rain.

Posted by Korinthia at 7:25 AM