What Color Would You Call It?

I have never been able to put a name to Quinn's eye color.  On forms where I have to commit to something I go with the garbage-pail term "Hazel" for lack of anything better.

Mona's eyes are just like mine: Greenish, with a blue-grey rim around the outside and a brown ring right around the pupil.  (So we also get lumped into "Hazel.")

Quinn?  I can't tell.  I have been staring into those beautiful eyes on that adorable face for his entire life and I just don't know.  Somewhere between green and brown and grey without being any of those things.  Recently his aunt gave him a shirt that is the exact same color, so I asked him to pose in it with his eyes really wide.  I may take the shirt to the paint department next time we're at Home Depot and see what the color sample cards there say.

So I am tossing it to the masses!  What do you think? 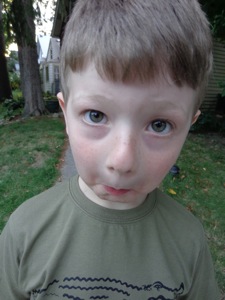 Posted by Korinthia at 2:02 PM