When History is Sweet

Every year my kids' school puts on a Multi-Cultural Fair.  It's an eclectic event, often crowded, usually interesting.  Mona's old kindergarten teacher always does a display about Alaska that includes moose jerky and the chance to pan for "gold."  Many rooms put out excellent food (samples from Brazil, this particular year, come to mind as particularly yummy), and the kids contribute to all the presentations.  Quinn's room did Spain (and on the wall where the kids were quoted about what they liked learning about Spain, Quinn's line said, "Everything!").  Mona's room primarily did Mexico, but there were some splinter factions that did additional displays about China and Ireland.  This made for a strange snack table of soda bread, pot stickers, and cookies, but we got to take some chopsticks home so it all worked out.

However, the big event for us this year was in Aden's room.  Instead of working in a group each student there did his or her own display about some connection to Milwaukee and its history.  My mom's side of the family IS Milwaukee and its history.  My great-great-grandparents moved here from Germany, and my great-grandmother, Alma Borchert, was the youngest of their six children born in the city.  Aden decided to do her research and presentation about her. 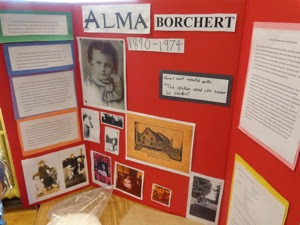 Alma Borchert is the person who always comes to my mind first when people ask that question about "If you could meet anyone from history...."
I didn't know my great-grandmother, but she was dearly loved by all who did.  By all accounts she was funny and kind and smart.  Hers was the home where family came to die when it was time so she could care for them in their final days.  My grandmother told me the only thing she ever resented growing up was the time her mother spent in the flat above in the evenings speaking German with her own father after his wife died.  That's the closest I've heard to a negative thought about Alma Borchert, but it says a lot if your worst flaw is that there isn't more of you to go around.

The stories about her wonderful cooking are the stuff of family legend.  The one thing my mom says she regrets not trying when she was a child was Alma's "tongue in raisin sauce" which her cousin (who was brave enough to taste such a thing) says she still thinks about and wishes she could have again.  We don't have too many of Alma's recipes because she prepared everything out of her head. 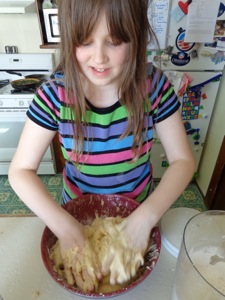 But we do have her recipe for her famous donuts.  And Aden wanted to make them.

The donut dough is sticky and has to rise twice, so they were time consuming but not hard to make.  We fried them in oil a couple of hours before the fair so they would be fresh.  This being our first attempt at donuts they were not pretty, but damn they were tasty.  The best part about the donuts is you get to shake them in a bag of sugar before you eat them, and we left that step to the people at the fair. 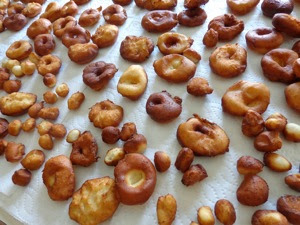 Aden also wanted to make her great-great-grandmother's plum kucken to serve, and that also went over well.  She did this entirely from scratch in the morning before she left for school.  (I helped by cutting up the plums since time was limited, but that's it.  She can make this entirely on her own.) 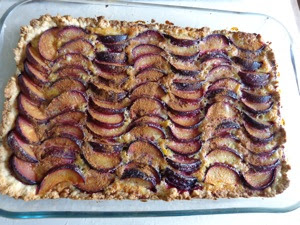 I'm so proud of Aden, and I love that she wants to make family recipes.  Alma Borchert was forced to drop out of school at a young age to help her parents run their restaurant.  She was a wonderful cook but was devastated that she didn't get to continue with school.  I think she would have been pleased to know that somewhere down the family line there would be a little girl here in Milwaukee who got to stay in school and still was able to cook an awesome plum kucken. 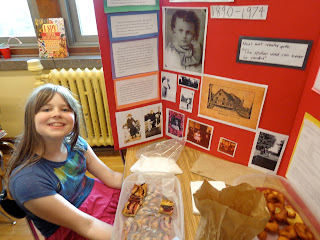 And those donuts?  We overheard people talking about them on the playground afterward, saying, "Did you get any of those donuts you could shake in the sugar bag?!  Best food at the fair!"  Alma Borchert's donuts live on, and sometimes history is as close as a bag of sugar.
Posted by Korinthia at 11:14 PM