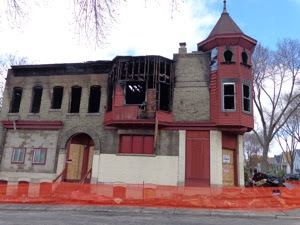 There was a fire in our neighborhood the other night.  It destroyed a century old building that at one time was a corner grocery store but in recent years was simply a somewhat dilapidated residence and band practice space.  No one was seriously hurt and the fire did not spread.

It happened around 11 at night the evening before Mother's Day.  Aden happened to be up late reading when she noticed all the sirens and flashing lights on her side of the house and came and got us.  She was in tears.

Mona and Quinn slept through everything, but there were dozens of emergency vehicles gathered around the building only two blocks away.  From Aden's second floor window we could see the flames leaping through the roof, and the smoke billowing into the sky flickering red and blue from the frantic lights below.  It was scary.

Aden kept asking if we should go help.  I told her that there were already lots of people there who knew what to do and would probably not appreciate us getting in the way.  I told her if I thought we had something to offer I would go, but we had to trust that the firefighters, police, and Red Cross were doing their jobs.  Still, I knew what she meant.  It's hard to watch tragedy unfold for people and do nothing.

My daughter was deeply affected by seeing that fire.  She was trembling as I held her, and didn't stop shaking for a good twenty minutes.  I told her I would lie with her until she fell asleep, but then Ian and I worried that she'd have nightmares, so I grabbed a blanket off my bed and curled up for the night with my baby.

It was a long night in that narrow bed, cuddled with a girl who now comes up to my nose.  I can't say I slept particularly well, but it was enough to listen to Aden breathe more easily every time she groped around for me, squeezing my hand when she found it. 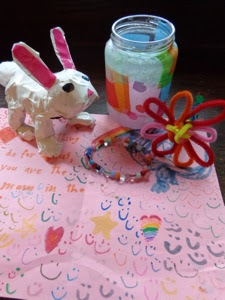 At about six in the morning I finally slipped out of her arms and dragged myself to my own room to try and get some real sleep before the inevitable arrival of my holiday breakfast in bed.

I got quite the haul this year, with a bead bracelet and a pipe-cleaner flower both made by Aden, a duct tape bunny (with real cotton tail) from Mona, a decorated jar that holds a candle from Quinn that he made at school, plus a card made by all of them that was literally filled with smiles.


Not to mention the sweetest little bouquet assembled from whatever was blooming in our yard that morning. 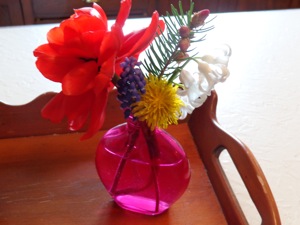 It was a Mother's Day that was neither here nor there.  We didn't do anything much out of the ordinary, but our ordinary is generally pretty nice.  There were tears at a couple of points, there were two trips to the grocery store (one to pick up cantaloupe for class snack for Quinn the next day) and I didn't get any of the things done I had hoped to get done.  I got lots of hugs.  And we checked our smoke detectors.

I had all my kids and my husband under one, non-scorched roof, and smiles to spare.  All in all I couldn't ask for much more.

Posted by Korinthia at 4:23 PM