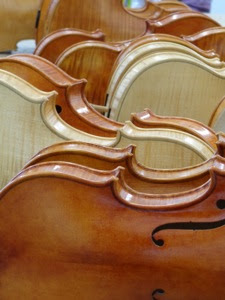 I can't believe it's been almost two weeks since I got back from my violin varnish workshop in Concord.  Lots of people have asked about it, so figured I'd better buckle down and write this post while enough of it is still fresh in my mind.

It was great.  Disturbing week to be in Boston aside, it was inspiring, helpful, challenging, reassuring, and altogether worthwhile.  Very glad I went, and I know my work will improve as a direct result.

There were a dozen people in attendance at the workshop ranging from professionals with experience to someone varnishing for the first time.  The primary instructors were Joe Robson (who is a varnish maker and provided us a range of his products to try) and Marilyn Wallin (an award winning luthier and former president of the Violin Society of America), and then later we were also joined by Roman Barnas (teacher at the North Bennett Street School) and Todd Goldenberg (a New England luthier). 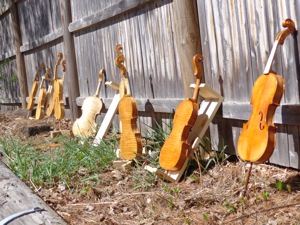 We were situated in two rooms in an art center in Concord, but spent as much time as possible working outside.  Color is easier to judge in natural light, and everything dried best in the sun when we could get it.

Everyone was asked to bring two instruments, one in the white, and one with a ground coat already established.  I managed to do my ground work at home backwards (not an auspicious beginning), but this worked out in the end because I was able to strip the instrument and that's a skill I needed.  I also got to learn a technique for completing a ground coat in a day in order to catch up, and that was valuable experience as well.  (Ideally, it's best to take your time and be thorough and enjoy the process longer, but the speed ground turned out to work perfectly fine.  Someone in our group dubbed the technique the "Fed Ex Ground.")

There were several revelations for me during this workshop, one of which was to finally begin to understand the true importance and function of the ground on a violin.  The ground coat is everything you do to the wood before you start layering on varnish.  The ground is in the wood, the varnish is on the wood.  With the ground you establish a base color to work over, and prepare the surfaces for taking on varnish.  In this workshop I was shown how to look for the ground through the varnish on a finished instrument, which was pretty amazing.

One of the things that's complicated about violin making is that among builders I know, it tends to be a pretty solitary business.  When you work in isolation you lack feedback.  In the workshop you could try new things, observe how different things were working out for others, and never feel like anything was beyond hope because there were so many knowledgeable people there to help salvage the work.

And there were techniques and materials that if I had used them by myself I would have felt panicked.   For instance, there are interesting dyes available to put into the ground coat, but if I had applied them at home I would have been convinced I'd just ruined my instrument.  I tried a gold dye that goes on looking like you took a highlighter to the wood, but after only an hour in the sun it fades down to a lovely color.  Check out the violin right after the dye went on: 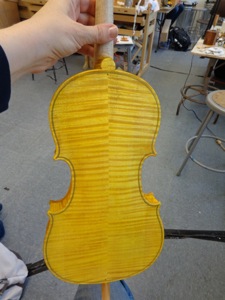 And here it is an hour later: 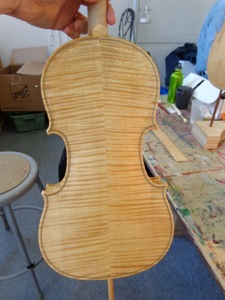 Isn't that crazy?  There is also a dye that makes the wood look like an avocado at first, and I got to observe that on someone else's violin and learn that turns out okay.

I was curious going into this workshop about drying time.  It sounded a little impractical (like a class on grass growing) and I wondered if there would be a lot of down time while we stared at wet violins.  But with two instruments there always seemed to be one that was ready to go, or you could aim for having them both sit while you went to eat or listened to a lecture.  I also learned that when properly applied, oil varnish can dry more quickly than I had believed.  We put things in the sun when we could, and at night left our instruments in light boxes. 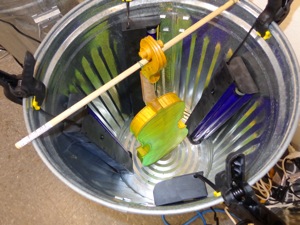 A light box is a box full of reflective surfaces and UV lights that you can hang an instrument inside to speed drying.  Mine at home is just constructed from a plastic storage container with doors in the front and lined with mylar.  In the workshop they set up shiny trash cans with lights clipped inside, and the tops of the clamps held the lid off to create some ventilation.
I went into the workshop with the hope of learning some new techniques and trying things in ways I'd never thought of.  Since I had two instruments I decided to do one using Joe's methods, and the other using Marilyn's.  Both of them produce excellent work but with different approaches.

Marilyn works with a brush, which is what I thought I would prefer.  I've only ever applied varnish with a brush, and as a player as well as a builder I am averse to my hands getting sticky or overly dried out from excessive washing.  What Marilyn is able to achieve with her varnish is to get color down very early.  She can get her instruments to a rich brown with fewer coats and greater transparency than I ever thought was possible.  Getting the chance to observe her work up close and ask questions and then have her walk me through her steps on my own instrument was invaluable.  She was gracious with her time and information, and I wish it didn't matter to me that she's a woman, but there are so few of us in this field that I found it additionally inspiring to watch her lead demonstrations.  (Plus she plays viola.  Could I ask for a better role model?)

I didn't build either of the instruments I was varnishing at the workshop.  First of all, there wasn't time to construct anything before going, and second, it's hard to be daring with something you labored over.  The downside of these instruments is that the materials and construction were not of my choosing, so there were unexpected problems here and there.  The violin I was working on with Marilyn had weird issues with its top.  The wood was absorbing and resisting certain applications in unattractive ways and we had to address that as we worked.  So I didn't get as far as I would have liked on it because I felt a bit sidetracked, but all good lessons along the way.  This was how far I got by the end of the week with that violin:

The instrument I did with Joe surprised me.  He essentially finger paints.  I was resistant to the idea (sticky!) but decided to humor him and at least give it a try.  And you know what?  It was fun.  There was something nice about being in direct contact with the varnish, and while spreading color around with my palm I had better control over the general look than I would have thought was possible.  I will definitely be doing this again on my own, as long as I can arrange for a block of time where children aren't able to interrupt me.  Here's as far as I got with that violin:

It was also interesting to watch Roman work, because his methods lie somewhere between what Joe and Marilyn do.  He works meticulously with a brush, and then blends and adjusts with his fingers.  It's so helpful to see a range of possibilities and not feel boxed in based on what you learned in school.

The work Roman demonstrated much of the week had to do with antiquing.  There are many people who prefer the look of an old instrument even when the construction is new, so there are techniques for artificially aging the look of varnish.  Roman did a pristine varnish job in the first few days, then strategically ripped, rubbed, and tore most of it back off.  (I think I could get the same effect faster by simply releasing one of my instruments into a rental program, but still good to observe.)  We didn't get to see the end result, but he promised to email us photos later.  At this stage his violin just looked scary, so I will be curious to see how it comes out eventually. 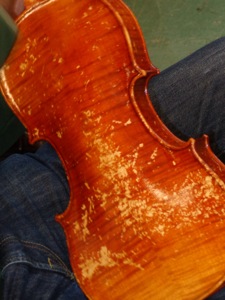 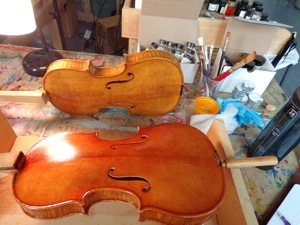 Another revelation had to do with choosing color.  I had always thought of deciding on color for a violin as something you could simply impose upon an instrument if you had enough skill.  And this is true to a degree, because if a client wants something specific you have to know how to achieve it, but I was shown how to read what the wood wants.  Some wood supports some colors better than others.  There were violins in the room that simply wanted to be brown.  You could have forced them to be orange or red or gold, but that wouldn't have matched their true nature.  This had never occurred to me, but it makes sense.  The same way when doing construction you have to learn to read the wood and let it guide you, the color you aim for should probably be led by the innate qualities of the wood as well.  It's something I will definitely consider when making instruments where I get to make all the choices.

We also had the opportunity during this workshop to look at some very valuable instruments brought in for us from local dealers.  Most of violin work is learning how to see.  Historic instruments offer good lessons on many levels and we were lucky to have the chance to study them.

A few readers specifically wanted to know if I was brave about taking out my own viola to play, even though I was worried about criticism.  The answer is yes, and no.  I did play a little with a couple of people, but there didn't turn out to be as much time for it as I imagined there would be.  I decided I did not feel up to specifically showing that instrument to any of the instructors.  And the more my varnishing skills improved over the course of the week the more I was glad I didn't.

Not that they wouldn't have been polite about it.  Everyone there was incredibly nice.  I didn't have one unpleasant moment with anyone there.  They were all people I'd be happy to go to lunch with (and did) anytime, and I feel fortunate to have made all of their acquaintance.  I hope if any of them find themselves in Milwaukee they will stop by!
So, a great week.  I have new brushes and materials and tools and ideas and enough new knowledge scribbled into my notebook that it will take me a long time to truly absorb it all.  But for the first time in my career I feel armed with enough information to be confident about doing violin varnish in the way I'd really like to.  Joe told us at the outset that his main goal was to remove the anxiety that often comes with varnishing a violin and replace that with fun.  And it is fun!  I have the best job in the world.