We are over the birthday season hump having successfully turned Quinn into a six year old and advancing Mona to the significant sounding age of nine.  Just Aden's sleepover this coming weekend and I can take a deep breath and then figure out what we're doing for Christmas.

One mom called sounding slightly worried since last year's theme was fish and everyone got a fishbowl.  I was not cruel enough to actually send live fish home with everyone, but they did get little wind up fish to put in their bowls.  My friend said, however, that the bowl was kind of crying out for a real fish and she ended up having to go out with her son and get him one.  She does not want anything that cries out for a lizard.

Essentially all Mona really wanted was a cake like her dragon cake from a couple of years ago, but as a simple, green lizard instead of something purple with horns. 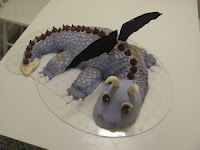 (The dragon cake remains my favorite, though.  And the aquarium cake was fun because it was such a collaborative effort.) 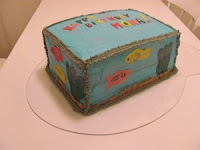 The most amazing part about making the lizard cake was that I only had to assemble it.  I had to be at work all day the day before the party, so I asked Aden if she could help.  She baked me two sheet cakes, made butter cream frosting from scratch, and even made me a batch of fondant.  The girl is good, I tell ya.  We had a lovely evening together in the kitchen when I came home and we watched "It's A Wonderful Life" on TV while I spread frosting and rolled out fondant.


I cut up a bunch of chocolate cake and shaped it like a lizard.  There were many volunteers to finish off the leftover bits of cake that were not lizard-worthy. 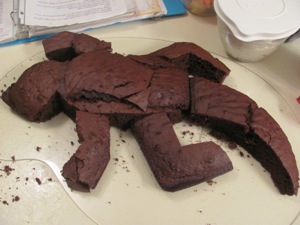 After that, frosting.  Which goes better with wet knife. 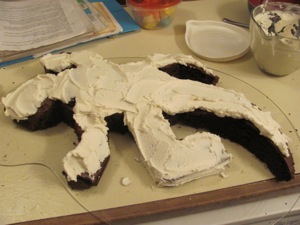 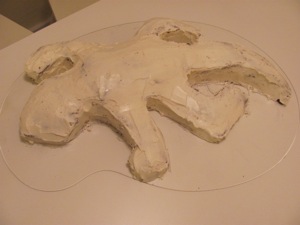 Then I added green food coloring to the fondant and kneaded it with a bunch of powdered sugar and rolled/pressed it out into flat sheets to drape over sections of the cake.  I don't know what actual cake decorators do to hide the seams between pieces of fondant, but I score them with a knife and add some water and blend them together and that seems to work.  Also, I bought these little containers of icing dye a few years back and they are really intense.  Normally when you add a lot of food coloring it tastes bad, but this stuff I can add just a little and there is a lot of color.  I kind of wanted to marbleize a couple of different greens together, but Mona wanted a simple cake so I stuck with a single green she approved of. 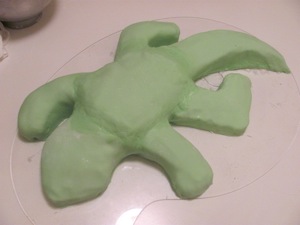 Then I added little claws with modeling chocolate left over from a different party, Mona put small candy pearls all over the cake, and I carved eyes out of an Oreo I found in Quinn's Halloween basket.  (Mona really wanted black eyes, not brown, so I searched around the pantry and asked Quinn if he would donate a cookie to the cause and he was glad to oblige.) 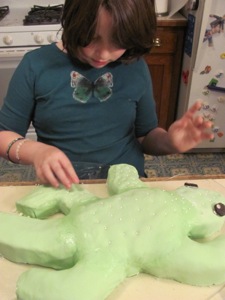 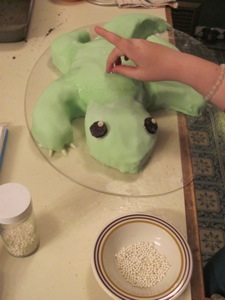 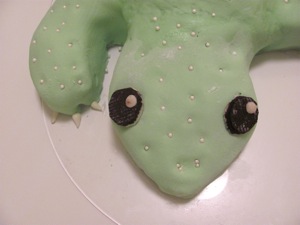 I think it came out nice.  Mona was happy with it, so that's all that really matters. 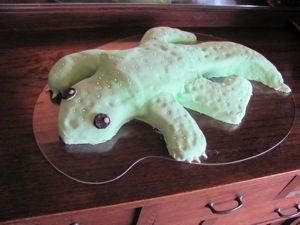 The rest of the lizard theme we worked out with a pin-the-gecko-on-the-target game that Mona made all by herself, there were small plastic sticky lizards to throw on the wall that went over big, and we also had lizard races.

For the lizard races I cut a bunch of lizard shapes out of some leftover particle board I had lying around. 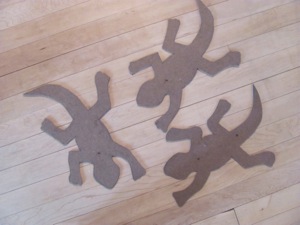 When I was in first grade I was a Blue Bird (are there Blue Birds anymore?  Or Campfire Girls?) and my mom had to come up with a craft for my troop one time, and she had us race cardboard turtles.  She cut a bunch of them out of mat board and we got to color them and then run a string from underneath through a hole in the neck and when you tied the string to a table leg and pulled up on the other end the turtle would scoot forward.  It was easy and fun and I figured that would work just fine with lizards.

All the kids got to decorate their lizards with paint pens and stickers and googly eyes. 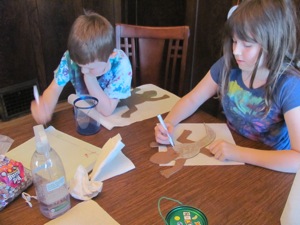 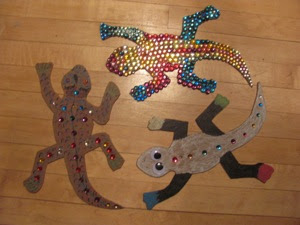 There was a spare lizard since one kid couldn't come, so I decorated it myself and had a blast.  I went with all jewels because I wasn't actually involved in the races and it didn't matter if mine took forever to dry.  But I like my bejeweled lizard!  I think next time there is a lull at the store I will do something similar to one of the ruined orphan violins in the back room and use it as a window display. 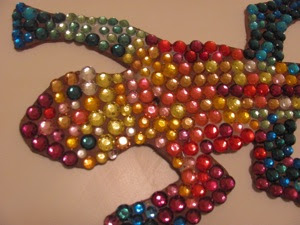 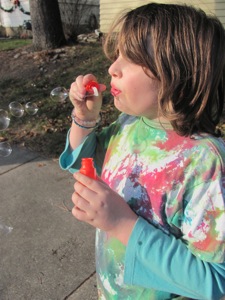 In any case, the lizard races were a big hit with Quinn standing at the finish line to declare the winner and Aden doling out prizes each round and Mona just looking happy to have so many friends in her house at once.

Toward the end when I couldn't take the noise level anymore I threw everyone outside to blow bubbles.  I'm still a little stunned that in December the weather was warm enough to stand on the sidewalk in short sleeves and blow bubbles, but there we are.  (Good thing the party wasn't "THEME: SLEDDING.")


So, a successful party!  Which feels good.  Especially now that it's over.  And my little girl is growing up.  My duct tape genius child animal expert with no volume control.  Damn I love her. 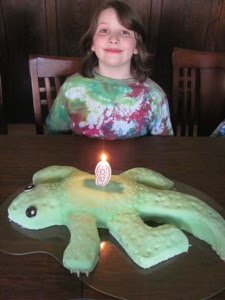 Posted by Korinthia at 6:00 PM