So, this is one of those posts where I'm kind of counting on the fact that my children don't see my blog.  Nothing bad, I promise, but this made me laugh and I feel like sharing. 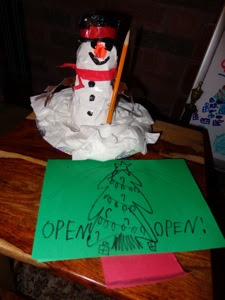 My kids went to bed last night before we had a chance to finish baking the stollen that we usually leave out for Santa.  But no matter, they left something else out for him:

Mona had created a little duct tape snowman on a 'snowy' plate with a pencil and a note.  I will spare you most of her atrocious spelling (ask me how many times I just tried to type 'atrocious' until spell check liked it and you'll know where her problem comes from), but it began, "Dire Santa."

Anyway, I didn't dare look at the note until all the children were asleep and I was filling their stockings.  (At which point I also discovered Mona had put out a stocking for her beloved fish, so I filled a teeny tiny bottle with water and sealed it with a twist tie bow.  Because seriously?  What do you get a fish at midnight?)  The note began with, "Do you see the snowman?"  And then continued on to say that if he liked it he could have it, but if he took it he had to sign the red slip at the bottom.  I suppose like a receipt, but I suspect it had more to do with procuring proof of Santa's existence.


What to do?  I didn't want to forge Santa's name, but I felt we needed to take the snowman.  I decided the best thing would be to leave a little gift in its place and no signature, but I was at a loss as to what to leave.  My mom said she had some cute little bird ornaments attached to the bags of gifts for my kids, but that the one on Mona's bag had fallen off so she had planned on removing the others as well rather than have one child feel left out.  We decided to use one of the remaining bird ornaments to leave in place of Mona's snowman, which was then carefully hidden in my mom's suitcase (along with the last ornament).

This morning my kids woke up excited, but showed great restraint.  I told them they could go look in their stockings if they were quiet, but to wait to open presents when the adults were all up.  They decided they'd rather wait and do all of it together, and entertained themselves with the stuffed animals recently rescued from quarantine in the garage from the lice emergency back in October.

But Mona did go check on her snowman offering and Ian and I listened to the kids conferring in the hall about the results.  Mona was thrilled with the little ornament, and rather intrigued that Santa not only took the snowman, but the stand and the card as well.

Eventually we all went downstairs and the kids were delighted with everything they unwrapped including the bubble paper that came with certain packages, and when Mona got to the bag of things from my mom she looked surprised and pleased.  "Grandma!" she exclaimed, "There's a bird ornament in my bag almost exactly like the one Santa gave me!"  My mom and I exchanged looks of 'Oh dear' but Mona was happy.  Rather than make the connection between the Santa gift and her grandma she chose to be excited that her ornament now had a friend and hung them side by side on the tree.

The rest of our Christmas went well.  The kids enjoyed a lazy day of being home in pajamas.  Aden spent most of her time writing in a new leather journal that a friend of mine custom made for her, Quinn filled in information in his Dr Seuss "All About Me" book, and Mona got Hex Bugs chasing each other around the living room.  My dad read to them from a book of poems about birds that he wrote and illustrated.  We dressed the dog in his new Christmas sweater and then called him Nerd Dog the rest of the day.

I took a nice walk out to my violin store with my mom and Nerd Dog where we picked up a bunch of my tools to bring home for sharpening.  It was a really great present to myself to get to spend an hour or so in my home shop putting a fresh grind on my plane blades and knives and chisels.  There are few things more wonderful than working with a sharp tool.

After dinner we gathered in the family room to watch the first act of The Enchanted Island performance from the MET simulcast that my mom had on DVD.  I love that my kids will watch opera.  Quinn passes out almost immediately, but the girls not only stay awake but really enjoy it.

Once the kids went off to bed I got to chat with my mom about ideas for the cover for my first novel, which I've decided to self-publish.  After years of giving it my best try to go the traditional route I'm done.  I just want to get my book out there and have a sense that it's finished so I can move on to more writing instead of being endlessly bogged down in the impossible business side of it.  I don't care if it sells, I just want it to be done.  And for Christmas this year my mom offered to come up with a cover for it, which is about as good a gift as anyone could ask for.

A lovely day.  Now we brace for the true craziness that is seven more people and two dogs descending upon us soon.  (One of my brothers is out of the country with his family, but strangely his dog is coming to visit.  That should be interesting.)

I wish all of you peace and joy this season.  Hope you had a lovely day, too.