I love this time of year.  Despite the shortened days and the stress and the hassle and the fact that all my kids' birthdays fall into this same avalanche of figuring out gifts and logistics and trying to remember that this is supposed to be fun. 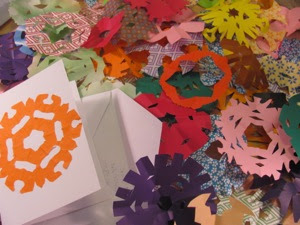 This year for holiday cards Mommy's Sweatshop cranked out dozens of snowflakes cut from origami paper.  The kids did a nice job, although they didn't point out until after we mailed them all that maybe it wasn't good to have made some from yellow paper since what kind of a message is that to get yellow snow?  (Ah, well, too late.  Anyone who got an inadvertent pee card, we still love you I swear.)

It's funny with holiday cards because I read all the time about how social media has killed the need for them and who uses the post office, etc.  But for a dying practice there are a surprising number of cards on our mantle.  I think we're up to at least 20 and it makes opening the mail a really pleasant part of my day.  I don't expect anyone else to bother, but I enjoy going through my whole address book and thinking about everyone I've collected there and sending along a card and sometimes pictures of my kids.  I like to think it's brightening someone else's day when they bring in their mail.

We've made spritz cookies in the shapes of wreathes and trees like my grandma used to do, and this weekend we will make her stollen (which is a bread with a glaze on it and decorated with candied cherries).  When Aden and I make grandma's stollen we don't include the citron that none of us like, but I miss picking those bitter little pieces out of my slice while chatting with my grandma at her kitchen table.  I'm not a good enough writer to express how much I miss my grandma.

With so much tragedy in the news lately I'm appreciating more than usual the comfortable bubble that is our home.  Inside our walls we've been lucky that traumatic events have been few.  There are coughs and runny noses, bills to pay, frustration with homework, repeated reminders about chores or violin practice, endless laundry....  But with the tears over practicing or homework come the breakthroughs, and we often dump the clothes that need sorting onto my bed and make it a folding party while we watch cartoons together.  There are annoyances and irritations in the day to day no matter who we are, but I'm fortunate that my life is filled with more hugs than squabbles, more dog nuzzles than messes, and after two deployments I never take for granted that my husband is home.  Compared to real problems in the outside world the things we tend to fret about currently rank as mere concerns or issues.

One of my concerns in the bubble at the moment is that Aden is conflicted about Santa Claus.  She's eleven, so she's choosing to be conflicted.


I know there are people who go all out with the Santa fantasy and others who flat out tell their children he's not real.  I'm not comfortable lying to my children, but I don't want to ruin anyone's fun, either.  I've always kind of gone with the same rhetoric about Santa that I do when I have to answer my kids' questions about religion, which is "It's a story some people believe and some people don't, and you have to decide for yourself."

We put up a real tree every year, and arrange all the presents underneath it as they arrive in the mail or I get them wrapped.  The kids buy or make each other gifts, and there is usually something for the dog.  There is no mystery about where any of these gifts come from.  But I don't put anything in their stockings until the kids are asleep on Christmas Eve.

The kids put out carrots for the reindeer and some stollen for Santa.  They follow Santa's progress across time zones on the online NORAD Santa tracker, and when he reaches New York they rush up to bed in hopes of being asleep by the time he gets to Wisconsin.  They are bursting with excitement on Christmas morning when they wake up and can't wait to run downstairs in their pajamas and see what's in their stockings.  A few years ago after emptying their stockings they declared Santa must shop at Target.  (One of the few downsides of living two blocks from that particular store--we probably know their inventory better than most of the employees.)  Since then I try to find stocking stuffers elsewhere.

I love all of this.  I don't see any reason they have to know I bought those couple of knick knacks they get on Christmas.  It's an insignificant mystery, but one that makes them happy.  And at some point they will all figure it out, and realize on some level they probably always knew.

But the thing with Aden is she wants magic.

When she figured out last year that the tooth fairy was really just me she was genuinely sad about it.  She told me recently when she lost her final baby tooth that she still wished she didn't know.  She has a friend who plants fairy gardens with her mother, and I know when Aden told me about it she wanted me to go along with it, too.  I didn't have any interest indulging in fairy stories, but I told her she was entitled to believe whatever she wants.  As long as we're not hurting others we can tell ourselves any stories we like that make this world a better fit while we're living in it.  But Aden wants there to be sweet mysteries to ponder and magic just around the corner.  She wants Santa to be real.

Aden told me the other night that most of the kids in her class don't believe in Santa, but she does, and she wants proof.  I told her that's not how it works because some things are not science.  Faith means believing without evidence.  If Santa is magic he's a matter of belief alone.  She asked me if I believe and I said I didn't know.

Because the truth I believe is that there is magic, but we make it ourselves.  When someone invents a story filled with characters that only exist in our minds and we care about them as if they are real, that's magic.  When a painting captures the essence of something beautiful in a way that is familiar but impossible in real life, that's magic.  When a joke diffuses tension at exactly the right moment, or a child hugs you as she sleeps, or you find exactly the right word....  Or when musicians build toward the height of something glorious and the full force of Ode to Joy hits you and you realize how much greater we can be together than we can ever be alone, I don't know a better word for that than magic.

I tried to tell Aden when she asked me if I was the tooth fairy that the fun of getting to do that for her was better than any story, and that someday I hoped she got to experience it, too.  But she's not buying that yet.  From her perspective all she sees is magic slipping away.  So she's clinging to Santa a little longer, though I'm sure the logical part of her speaks loudly in her mind that it's just a tale we tell at Christmas even as she outwardly proclaims he and his reindeer are coming soon.

When Aden was about two weeks old my brother, Barrett, got to hold her for the first time, and he was so overwhelmed he found himself apologizing for getting tears on the baby.  After the holidays I emailed him a note about how good she was, and he wrote back: "Aden is magical."

Which is the great irony of her looking so hard in the world for magic.  She's too close to it to see.

Posted by Korinthia at 6:33 PM