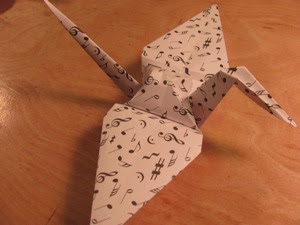 Mona got an origami book out of the library recently and was excited to start folding.  This particular book has pretty illustrations that look simple enough, but at some point Mona hit a step she didn't understand and asked for help.  The directions were ridiculous.  Easy things were laid out plainly.  (Fold in half, corner to corner, as shown in the picture.)  Then out of nowhere were complicated steps all lumped into one that would have been better illustrated as a series.  (Squash fold out both ends so they point to either side after the bottom edge has been folded up to the previous crease, as shown in the picture with three arrows pointing in different directions along with dotted lines for good measure.  Sure.)  So what we end up doing is I figure out the whole thing and try to lead whoever is interested in making origami through each step, explaining as I go and only occasionally referencing the book.

But I'm not good at following other people's directions to begin with.  I have to see where something is going, and I have to understand the reasons behind each step to want to do any of them.  Aden and Quinn are able to follow instructions.  Mona's brain works more like mine.  We both get impatient and jump ahead adding our own interpretations to whatever we're working on.  And the thing with origami is that there are a lot of steps that are not finished folds but creases laid out in advance for other steps to come.  It's not particularly intuitive in the beginning; it's more disciplined.

There are a couple of steps in making a paper crane that are hard to explain, even if someone is doing them right in front of you.  Steps that are essentially about turning things inside out, and each time I relearn them it all comes flooding back and I think, "Oh yes!  Of course!  This is what happens!"  And then I can do it and all is fine.  I crank out dozens of cranes, trying to make each one cleaner and crisper looking than the last, thinking this time it will stick.  This time I can go away from doing this and a year from now I will remember.

But it doesn't work that way with paper cranes.  Some lessons I suppose we are meant to relearn, but I don't understand why that's true for some things and not others.

There is some pain we mercifully forget and recall only in the abstract.  I am surprised every time I have the flu just how horrible the experience is, but when you can breathe again later it's difficult to conjure up that feeling of choking on your own fluids.  I've suffered some painful burns, but beyond remembering they hurt that pain is thankfully just an idea at this moment.  I once thought I would never stop crying after my first miscarriage.  Then again after the second.  Now it's more of a historical footnote in my life and no longer causes tears.

There is some pain that remains fresh.  There are days I still cry over the loss of my grandma.  When I picture Mona at age two falling over a fence at the park onto concrete four feet below it still causes my heart to jump into my throat.

There are moments from my past that can still make me just as angry as they did originally if I let myself dwell on them too long.  Some transgressions I have been able to let go, and forget why they ever troubled me much at all, and others I just can't.  Sometimes forgiveness comes easily.  Sometimes it doesn't.

But I think the greatest thing about having children is the joy of relearning pretty much everything, even the things you thought you knew.  It's good to have to explain ordinary things, and look clearly at what you take for granted.  Reading books to my kids I that haven't seen since my own childhood is somehow both sweet and thrilling.  Being surprised at the zoo by certain animal facts that I must have known once and now know again makes me smile right alongside my kids learning them for the first time.  Cracking eggs, counting change, tying shoes....  Teaching is just another form of relearning if you're paying attention and not just going through the motions.

So as I fold paper cranes with my children, leading them step by step, I wonder how much of it will stick for any of us.  Maybe it will imprint on Mona's brain and she will be able to do it forever.  Or maybe she will forget and we will relearn it again in a few years when the idea catches our fancy again.  All I know is that this time around I'm not frustrated with myself for having let it slip away.  If relearning it puts me on more equal footing with my kids as we select our pretty paper and make our creases I don't mind that.  I won't mourn the loss of something that with a little effort I can have again.  There are so many things in life that when they are lost are truly gone.  I'm grateful for the opportunity to relearn the paper crane. 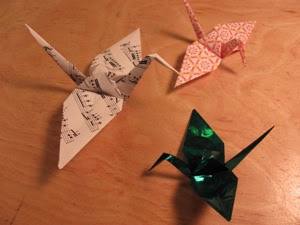 Posted by Korinthia at 8:40 PM