Some Days it's Good Just to Breathe

Some days my little violin store is very busy.  Some days it's quiet. 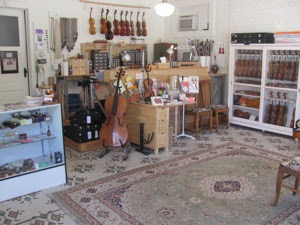 Because all of our children are now in school full day we can finally both work in the violin store for a few hours at the same time.  Until recently we had a tag team approach, where one of us would be home with the kids and the other would try to make progress in the store at the bench or desk.  It's nice as I do repair work to look over and see my husband just a few steps away.  I like that we run our business and our lives together.

I often tell Ian as he's sifting through the receipts and post-it-notes on his desk that for every bit of paper representing a person who came into the store, there were usually three or four other people who left no evidence of their visit.  I spend a lot of time talking to people who are curious about violin making, or want to tell me about a relative who played music, or who simply like the atmosphere of our little shop and want to hang out for a bit.  Sometimes when I'm drowning in repairs I'm not as willing to chat, but most of the time I'm happy to share what I know and I enjoy hearing people's stories.

Today while my husband and I were both working a man came in who looked familiar.  Turns out he'd stopped in a few years back and tried to sell me insurance.  He said he was in the neighborhood and was glad to see that we were still in business.  He was considering taking up violin.  He was concerned that he might be too old for that.

I assured him (the way I do many people who come into my store saying the same thing) that there is no "too old" for music.  He was too old to be a child prodigy, but that was about it.  My oldest adult beginner was 77 and he did just fine and was one of my all time favorite students.  The man told me about the violin music he'd had at his wedding.  That he'd always loved the sound.  I listened, and then gave him more general information about violin and how to get started.  As I talked I continued to work on the violin at my bench, and the man listened and occasionally paced around while looking at things on display.

But there was something about the way this man lingered in my store that was different from most people.  There was something forced in the smile he gave me, as if he had to remind himself to do it.  He seemed distracted and a little lost, but not ready to leave.

Then, as an aside during one of his questions, he mentioned his wife had died.
I told him I was sorry.  And then he said he was actually on our side of town trying to find the grave marker store.  He thought it was nearby, but he hadn't seen it yet.  Ian said he thought there was one over on 13th closer to the cemetery, and he got to work looking up the address on his computer.

Until that point I had not been paying too much attention to our conversation.  I get asked the same questions all the time and generally don't have to think much about how to respond.  I can concentrate on my work and still talk on autopilot.  At that moment I switched off my automatic answers.

The man started to tell me that he thinks they can do nice things on grave markers anymore.  That they can laser etch photos onto them.  I told him I'd seen that and it can be very nice.  He forced a smile and told me that one time he was fishing with his daughter on a boat and his wallet had gone over the side.  His favorite picture of his wife had been in that wallet.  He wondered if that would have been a good image to use.

He was quiet for a moment and then he smiled again and said he didn't want to be someone who upon losing his spouse just up and moved away or changed everything.  He wondered if violin was too ambitious, if he was really considering it at the right time.  He already had a piano.  Was piano easier than violin?

I told him that he should play whatever instrument spoke to him.  It didn't matter what was harder, it mattered what held his interest.  If he liked the sound of the violin, he should rent one and find a teacher and give it a try.  If it wasn't right he could stop.  I also told him that with music you can express feelings in a way that can be therapeutic.  Making your own music feels good, and it's nice to have something in your life that takes concentration, with goals to work toward.  I told him it's a wonderful thing to be able to create something beautiful.  And that down the line as he got better there were lovely groups of amateur players around town, and he could be part of a small ensemble one day, or even an orchestra where he could contribute to making some of the greatest music ever written.

I have no idea if any of that was helpful to him, or how much of it he even heard.  When I handed him the address of the grave marker store on a post-it-note he just held it for a moment before he seemed to decide it was time to go.  He only glanced back once as he headed out the door, and I called after him to please come back any time.

It was hard to get back into my work for a while after that.  I kept looking across the room at my husband.  My husband whose mortality I've had to consider with more intensity than is healthy during his deployments and since.  I am so thankful he is home.  I am so thankful for the life we share.  But the quote that haunts me more than any other is "It is a fearsome thing to love what death can touch."

I had started my day a bit frustrated with counting calories and fretting about the odd jobs that never get done and the clutter in the house.  But then I made a point to worry less about such frivolous things.  I appreciated simple pleasures.  I hugged my kids a little longer than usual when I came home.  I didn't pass by my husband without giving him a kiss.  I gave the dog an extra treat.  And I took a moment to enjoy the wonder of simply being able to breathe.