This weekend was Doors Open Milwaukee, where over a hundred different places were open to the public for tours and a peek into places most of us never get to see.  It's an interesting event the city tried last year, and it was such a hit they decided to repeat it.  I'm hoping it becomes a new annual tradition because it's a great idea, and it will take years for us to get to everything we want to see.  Too often we neglect to seek out the interesting sights in our own neighborhoods, and it's easy to forget to be curious about places that form the background to our daily lives.

Now, outings with kids are always a gamble no matter who you are.  My kids are unusually good on car trips and in restaurants, and can be trusted not to touch things when we go into stores or other people's homes, but even they get whiny when they are hungry and tired.  Ian and I explained at the outset that Doors Open Milwaukee was optional.  At any point on our tour we could go home.  This was either a threat or an offer, whichever need it met.

The weather looked beautiful but was cold.  Our first stop was the city hall to try and get tickets for the building's bell tower, which meant waiting in a long line at 9:00 a.m. outside.  (Everything on the Doors Open Milwaukee tour was free, but some spots with limited space required tickets.)  There was much complaining about the cold and the wait, even though I think I kept the kids fairly well entertained in the line.  Then I think Mona's mood was officially broken when we were unable to actually get tickets to go up to the bell tower.  I reminded her that it was still really cool to get to stand inside the city hall, but the whining had begun.

Milwaukee's city hall is modeled after a building in Germany and is quite striking.  (And anyone old enough to have watched Laverne and Shirley might remember it from the opening credits.)  Here is the building we did not get to the top of: 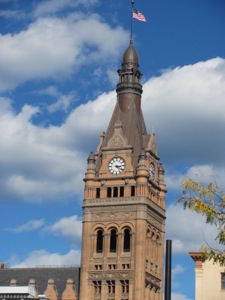 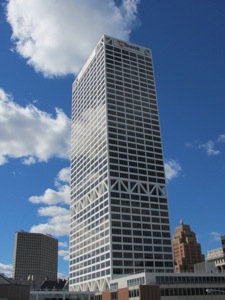 We then tried to get to the US Bank building so we could go to the top of that, but couldn't get close to it because the Komen Walk for a Cure was going on, and all the streets were blocked off every direction we tried to go.  (By the time the walk was over and we got into the building later in the day the line was just too long.)  So here is the tallest building in Wisconsin which we also did not get to the top of: 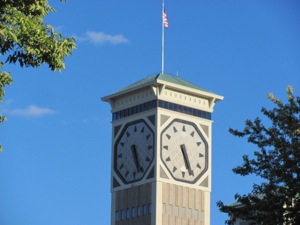 The only thing on our list I didn't want to miss was the Allen-Bradley clock tower.  (That we did finally get to the top of.)  It's on the south side of town and is the largest four faced clock in the world.  (Yes, bigger than Big Ben.)  It looms over our end of Milwaukee I was really interested to finally step foot in that building after more than a decade of just driving by it.  This meant another long line out in the cold, where I at least kept the kids happy with a rhyming game, but it was worth the wait.  The inside of the building was nothing like I had pictured.  I expected something industrial, but the lobby looked more like an old fashioned reading room for white haired men with a code of silence.  Oak paneling, oil paintings, armchairs, reading lamps, bookshelves....  The whole building was younger than I thought (the giant clock tower we were in only built in the 1970s).  Anyway, I thought going up to the clock meant we would see gears, but instead there is an observation deck above the clock with an amazing view.  I had never noticed the ring of windows above the clock faces before!


After the Allen-Bradley building Mona was officially too annoying to continue, so we went home.  Turns out this was a good plan because we walked the dog, got everyone fed, the kids all had enough down time to realize they were missing an interesting opportunity, and after a couple of hours we hit the road again. 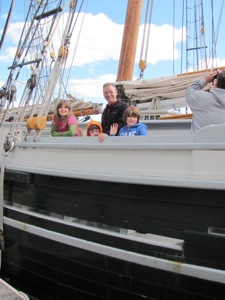 We got to go inside a bridge house and see where they push the buttons to make the bridge go up and down.  We went inside a transit building with an interesting display that for peculiar reasons nobody ever gets to see.  We visited a firehouse where they still use a pole (and the fireman who gave us the tour said that never stops being fun).  We got to walk around a schooner called the Denis Sullivan:

The schooner docks next to Discovery World downtown, and so we also played with some of the things on the grounds there.  The benches double as xylophones, and there are these pretty shimmering sculptures that you can crank a wheel at the base of to turn them a different direction: 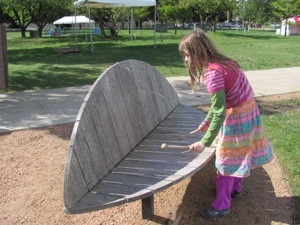 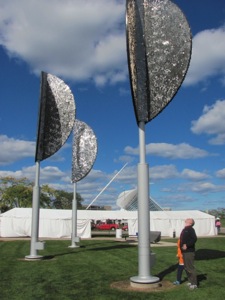 The last big event of our day was a trip to the planetarium.  We go to the Public Museum that it's attached to all the time, but have never been inside that part of the building.  The kids loved it.  We got to see a show about what would be visible in our sky that night, and then there was a movie about colors in the universe that was a little weird, but it was still fun watching in that environment.

By the end of the day I was really proud of the kids for hanging in there as well as they did, and Mona had a complete turnaround and was adorable with no trace of her earlier grumpy self.  All of us are already looking forward to next year.