I enjoy competitive cooking shows.  I don't know why.  There is something amusing about people yelling over risotto that makes it fun to have on in the background while I work on violins.  For my 40th birthday my neighbor and I teamed up to make beef Wellington and risotto while trying to say mean things to each other in English accents and it was a blast.

At one point on a rainy afternoon this summer Quinn was having some sort of breakdown born of exhaustion and I needed to distract him so I pulled up an episode of Chopped on Hulu.  Next thing I knew the girls were on the bed, too, gathered around my laptop, and I was explaining that the chefs each get a mystery box and they have to use the ingredients in it to make first an appetizer, then an entree, then when down to the final two people, a dessert.  They were hooked.

Now, I have to say, I am impressed with how much more adventurous in spirit this has made my kids when it comes to eating.  There is not much that they serve on Chopped that if set in front of the average kid would even get touched, but my kids get all caught up in the judges' comments and decide everything looks good.  One episode involved star fruit, and they asked when they spotted some in the store if we could please please please get some.  And they liked it.  And we've gotten more since.  Aden watches with bated breath as the contestants open their boxes and immediately starts telling me what she would do with the ingredients, however weird they might be.  Mona says she wishes she could eat all of it, and Quinn echoes everything Mona says.  So, Chopped is a hit.

Last week we needed an activity.  I had the day off, Aden didn't want to change out of her pajamas, and Mona was bouncing off the walls, so I came up with Art Chopped.  I didn't want the kids experimenting with food in any kind of rushed manner, and we have lots of art supplies, so I told them I would pick out some items from the craft area and put them under boxes and they would have to make something.  It wasn't a competition, there was no time limit except done by dinner was preferred, and if they needed help they could ask.  (I know Aden would rather I set something up more authentic to the show, but I wasn't willing to pit the girls against their brother who is only five.)

Mona could not have been more excited.
This might be her thing, so we may need to find her some kind of competitive art event.  When we came across voting for finalists in a duct tape craft challenge at a Home Depot in Michigan when we were there recently, she about burst at the seams wanting to be in that contest.  She would win, too.  Check out this bird she made out of paper and masking tape and a couple of feathers she found: 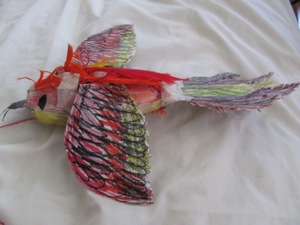 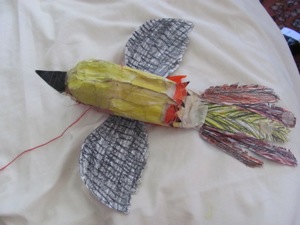 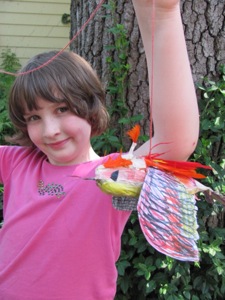 Anyway, for under each person's box I selected a set of old watercolors, some fake jewels, and a sparkly straw.  They gathered by their boxes. (And this I took pictures of, I swear, but I must have accidentally erased them from my camera.)

Upon opening them, Aden was thoughtful, Mona leaped to her feet saying, "I know exactly what to do!" and Quinn hesitated for a moment before bursting into tears.  (Hard to blame him.  Not many would have the confidence to go up against Mona in an art competition, however non-competitive I tried to make it.)  After he cried himself out I suggested maybe we use the mystery box items to make a little cupcake.  He liked that, and got to work.

This post is over a week after the fact, and my kids crank out a lot of art projects in the average week, so I don't know where to even look for the final pieces they came up with.  Aden's involved something with crayon shavings mixed with glue and I don't know what happened to it, and I really wanted a picture of Quinn's cute little jeweled cupcake but it's just gone.  (So no pictures of that, either, which means I might get my blogging license revoked.)

But!  Mona keeps most of what she makes in a chaotic looking yet organized heap in her closet so I was able to get a shot of her creation: 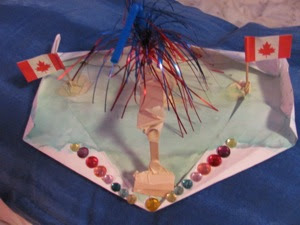 Looks like some sort of mock up for a Canadian Welcome Center, which means Mona remains as unexpected as ever.

Anyway, Art Chopped!  Good for a rainy afternoon, and using up any odd supplies that are lying around.  (Someday, I promised Aden, we will do it with food.  We'll see how long I can put that off.)