The Parade of Enduring Freedom

I hope everyone had a great 4th of July!

Ours was lovely, and we got to share the celebrations in our local park with friends who were refugees from the recent power outages in Ohio.  (It may have been 100 degrees here, too, but at least we had central air, lights, and refrigeration.)

We enjoyed the morning parade, which for the first time in our memory did not include any giant sausages running races, but did not lack for candy.  (The consensus among my children was that judges throw the best candy.)  Lots of baton twirlers, most of who were still managing to twirl in the heat despite our park being at the end of the parade route.  We had a cookout in the backyard for dinner and the fireworks in the evening did not disappoint.

But the big event for us this year was the bike decorating contest.

There is a children's parade in the in the middle of the day every 4th of July where kids decorate bikes, trikes, coasters, and buggies and get to go across the main stage at the pavilion and receive prizes.  My daughters have become disillusioned by this in the past few years because it's always apparent that the winners had help from their parents and my kids do everything on their own.  Aden almost didn't enter this year because it seemed hopeless.

But I told her the fun of it is in decorating her bike any way she likes, prizes or no prizes, and she should just have a good time with it.  She would be too self-conscious to decorate her bike for no reason, so this was a great excuse to be creative.  Aden wasn't sure, but got interested when we started buying supplies.  A couple of days before the fourth we went to the store and the kids picked out red, white, and blue streamers and a package of straws that had red and blue sparkly tassels on them.  And Mona found a pinwheel she liked.

I love watching my kids dive into a project.  They set up the whole back deck with scissors and tape and streamers and pipe cleaners and worked on their bikes and Quinn's scooter for many hours despite the heat.  Mona attached her pinwheel to the handlebars so it would spin as her bike moved forward, Aden constructed a small bald eagle out of duct tape, they all found ways to use the streamers and pipe cleaners and tassels.  I was really proud of them.

On the day of the big event we went with the kids to register their bikes and scooter only to encounter the cranky volunteer ladies.  The woman in charge really needs to just give up control to someone who cares at this point, because she's impatient and simply seems annoyed by the whole thing.  She was dismissive last year when the kids were on stage, and this year she actually opened the event by saying, "Welcome to the children's parade of coasters, buggies, and whatever else there is.  It's very hot so let's just get through this as quickly as possible."  Hooray, Happy 4th to you too!

But the first cranky volunteer lady looked at Mona's bike when it was our turn to sign her in and asked, "Where is the theme?"  Theme?  "Yes, the theme this year is Enduring Freedom.  Where is her theme?"  Well, good grief.  I'd never seen mention of a theme anywhere in all the years we've been going to the park for 4th of July.  Everyone's bikes were decorated in red, white, and blue.  They are always decorated in red, white, and blue.  (Except the first year my girls entered and they bought stuff in tropical colors and added dozens of small plastic snakes to their bikes, because why not?  Now they at least get the patriotic slant of the event, but personally I miss the snakes.)

Enduring Freedom indeed.  I looked at the lady and said, "Mona had freedom to do her bike completely on her own without any help at all and it is my hope that that kind of freedom endures."  Whatever.  They gave her a number and put her bike in line with the other bikes all decked out in red, white, and blue to await judging.

Aden's bike somehow escaped that kind of initial scrutiny, and Quinn was on the fence about whether he wanted to enter his scooter.  He'd done his minimal decorating all on his own, and it looked like what a five year old boy would do by himself and he was unsure about having it be judged.  And who can blame him, because look at the other entry in the coaster competition: 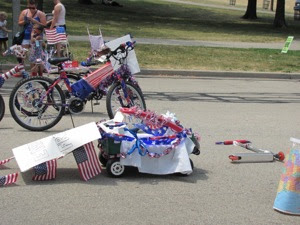 That's Quinn's scooter in front with its couple of tassels and streamers taped on, and the wagon behind it is decked out with American flags dragging on the ground and the sign attached to them says "Enduring Freedom" so they apparently got the theme memo.  But which kid do you think did his own work?  Anyway, they divide all the categories into boys and girls, and Quinn turned out to be the only boy in the coaster category this year.  The only one.

So he scooted across the stage and picked up a trophy for first place.


It was hilarious.  And adorable.  Despite the cranky volunteer lady whining into the microphone and mispronouncing his name and rushing through everything.  Quinn got a trophy and a ribbon and a Hot Wheels loop-the-loop toy.  It was great.

But the really exciting thing was that this year, all the bikes in the girls' division looked like they had been done by the kids themselves.  There were some elaborate entries on the boys' side that gave me doubts, but not among the girls.  And Aden won second place!  Mona received honorable mention.  We were really proud of both of them, and Aden looked pleased to know that on a level playing field she could do well. 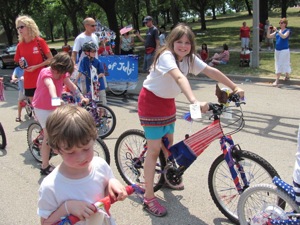 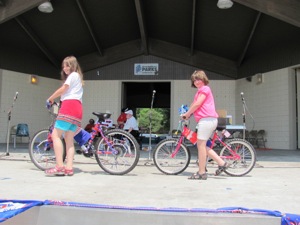 Mona fussed that if she'd only known the theme she might have had a better chance in the judging, but I really can't imagine what she would have done differently.  All the kids in the parade got a certificate and a toy and it's just for fun.  I don't want her to take it seriously.  I just want her to enjoy her Enduring Freedom to do what she does.  Her theme should always be 'Mona' and she will be mentioned honorably her whole life long.

Posted by Korinthia at 9:14 AM