I've written before about how Quinn loves map puzzles.  He's loved them since he was very small.

Quinn has also enjoyed making maps at school, and within hours of starting summer vacation seemed to be going through a bit of withdrawal.  He asked if he was allowed to make maps at home and I said of course.  So he got out his Asia puzzle and put India on a piece of paper and tried to figure out how he could trace it like he would the traceable wooden map parts at school without ruining the puzzle piece with a pen or pencil.  Quinn is careful with things, and couldn't figure out a way to make it work without damaging his puzzle.  He began to look dejected.

So I asked him if there was something else we could do that was different from what he did at school, some new kind of project.  He thought about it and decided what he really wanted was a map puzzle of Australia.  The map puzzles we have from GeoPuzzles include North America, South America, Africa, Europe, and Asia.  When he does them all at once he then lays them out on the floor together like one big map, and every time he points out to me that we are missing Australia and Antarctica.  He likes things to be complete, so this bothers him.

We agreed a map of Antarctica in the style of the other GeoPuzzles would be boring because the land mass would be one big piece.  (Although we can always just do that someday like a regular puzzle and cut up the continent into random shapes.)  But Australia has states (which Quinn could readily name and I could not) so it would make a good puzzle.  We set to work.

I'd never made a puzzle from scratch before, but it didn't look hard, so I thought I'd share what we did here in case anyone else wants ideas for making a personalized puzzle for their kid.  (Maybe with pictures of family pets or favorite toys.  Lots of possibilities!)

We started by finding a piece of cardboard (taken from the back of a big pad of drawing paper) about the thickness of our existing puzzles.  Since Quinn wanted the new puzzle to match the others I let him use a ruler and a pencil to mark off how big he wanted the finished puzzle to be. 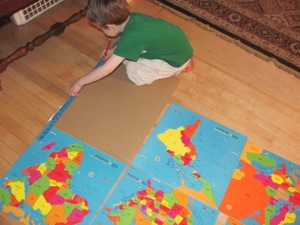 (Lots of photos in this post, so maybe it's best to add a jump here....)
Next, we enlisted Ian to draw the land masses on a big sheet of poster board.  We have funny little projector I got as a kid that lets you light up images on paper onto a wall, so I had Quinn find us a picture in his atlas and Ian traced it that way.  Since it was a map I wanted the shapes to be somewhat accurate and that seemed like a convenient way to do it.  (Normally I would just draw freehand.  Or if had an image the actual size I wanted to trace I would use tracing paper.)  Once the map was outlined I wrote in the names of the states and countries. 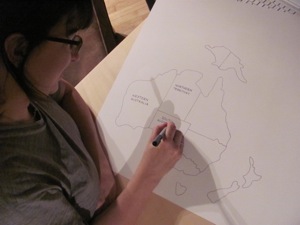 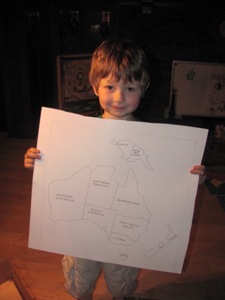 I had kind of envisioned doing this project over the course of a few days, but Quinn was really excited after we got the outline done and wanted to paint even though it was getting late.  But unless we're getting up for something the next day we don't have official bedtimes during summer vacation, so out came the paints.  Quinn did all the land with watercolors and he let me paint the water with poster paint. 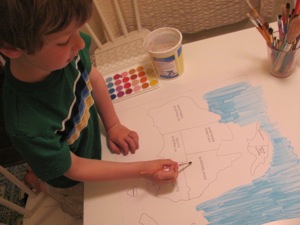 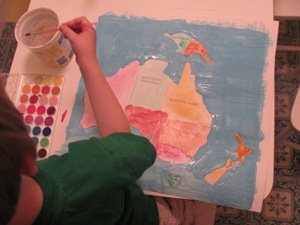 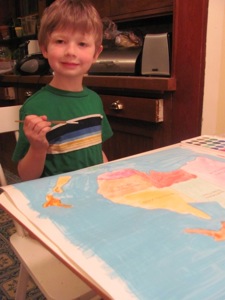 After the whole thing was painted I took a photo of the map and emailed it to Walgreen's to make a tiny poster of it to use for the box.  I knew for Quinn one of the most important parts of the puzzle was going to be the box.  (I think this would be a good way to make a puzzle out of a child's drawing that you don't actually want to cut into.  Take a photo, blow it up, use that.  I would have just done it on a color printer but I wanted our map puzzle box to be glossy like the others.) 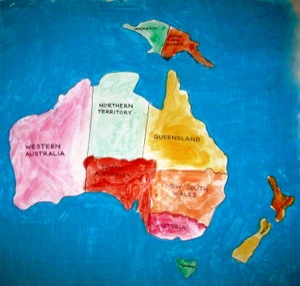 After the paint was dry the next morning I used spray adhesive to attach the poster board to the cardboard, and once that was dry I went over the whole front of the puzzle with spray fixative like you would use on a pastel or charcoal drawing, just to protect it a little.


Once that was finished I had Quinn draw on any final details with a sharpie, such as the compass and the GeoPuzzle/Australia information on the map.  I also added the names of the oceans and the nation's capitals and anything else Quinn wanted. 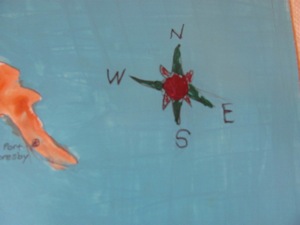 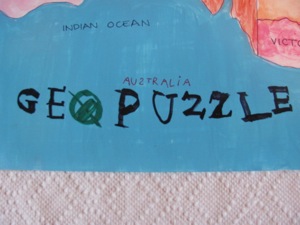 When Quinn declared the picture done I used an x-acto knife to cut it all out.  It was a bit annoying getting around all the wiggly edges of the individual states and islands but it wasn't hard.  And it made Quinn so happy!  He LOVES putting this puzzle together alongside his other map puzzles. 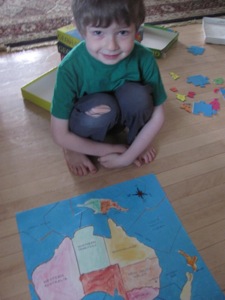 The last step was the box.  After the little poster picture arrived from Walgreen's I built a box out of old box lids and taped the picture on, and had Quinn do the final text.  He carefully copied the look of the lettering off another box, and chose the color brown because it seemed the most Australian to him for some reason. 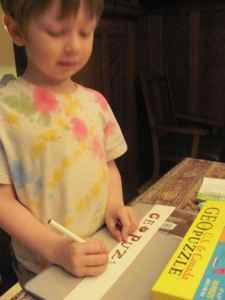 That's a boy who is proud to own an Australia puzzle. 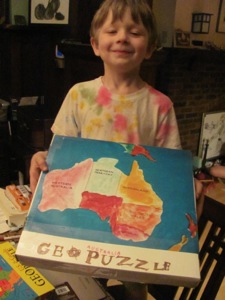 It probably seems like an insane amount of work, but it really wasn't hard and we had fun putting it all together.  I have a feeling we'll have to make some kind of Antarctica puzzle to complete his collection before the summer is up.  It's one of my favorite challenges as a parent to try and find ways to let my kids' interests guide the things we do while combining that with stuff I want to do myself.  It was interesting to make a puzzle.  And it was a project that didn't involve glitter so win-win all around!
Posted by Korinthia at 3:30 PM