(I suppose a brief disclaimer is in order to mention that Target doesn’t know I exist beyond what shopping I do there, and I am not mentioning a specific store as some kind of promotion for it.  It just happens to be the store in our neighborhood and we like it.  But if Target sees this and wants to send me gift cards I won’t say no.) 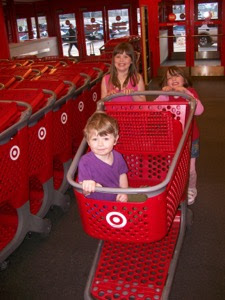 We have a Target store two blocks from our house.  We are there way too often but it is literally our corner store.  It’s hard to think of something handier to have just down the street, frankly (aside from maybe my kids’ grandparents, which is something I dream about some days).

When we first moved into our house, Target was our source for a lot of the new household goods we needed.  When I had my first baby I used to walk her there a lot.  Ian was in school most days, and hanging out at home with tiny Aden got claustrophobic sometimes and two blocks to Target was easy and fun, and usually necessary because we always needed diapers or wipes or something.  We only had one car, and if Ian took it on weekend drills with the Army, being able to walk to Target with the baby for something was a godsend.  In the winter it was a place to go that was heated, and in the summer it’s air conditioned.  Two blocks isn’t hard on tiny legs, and to be able to walk someplace with bathrooms and a changing station that kept the kids entertained and also allowed me to get some basic errands accomplished at the same time has been great.  To say it’s been convenient is an understatement.  There’s a snack counter, a pharmacy, and a photo lab.  I’ve breastfed my babies at Target, I’ve suffered a few impressive tantrums there, and we’ve had many an amusing lunch while playing I Spy and sipping Icees.  I know that store like the back of my hand.

Or, at least I did.  Recently the kids and I noticed a number of truck-sized containers taking up the south end of the parking lot.  We speculated about what they were for.  My kids were hoping for a carnival of some sort, just waiting to be unpacked and spread out in a dazzling display across the whole parking lot, but instead, the next time we went we discovered that the store is being remodeled.  They are doing it in little sections and I suspect mostly at night so that the store remains functional during the process.

It’s weird.  I hadn’t really thought about just how much time we’ve spent at this one store until they started messing with it, and it’s kind of unsettling, more so than it should be.  My kids don’t like change anyway, and outside of home, school, and the violin store, I would wager that Target is the other place they know best, so it’s awkward to have it transform into something unfamiliar.  That probably sounds sad to some people to say my kids and I are attached to a big chain store, but our neighborhood Target has always felt personal to us.  We’ve known the same employees there for years.  I’ve talked to people on our block who have lived here for decades and remember when the neighborhood protested the building of the Target store just up the street, and they all say once it opened everyone loved it.  It’s where we run into our neighbors and buy our school supplies and get medicine when we are sick.  It’s a place where we have fun while getting stuff we need.  Or don’t need (if it’s on sale): 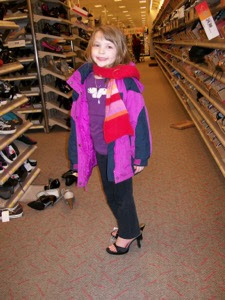 (Mona at age 5 trying on high heels.  She still has them, and someday down the line they will be the right size.)

I was there the other night with Quinn because he needed pants.  Most of the pants he has have snaps on them, and he can’t do/doesn’t like snaps, so he keeps re-wearing the same pair of sweatpants over and over.  I figured we’d just pop in and find a couple of 5T pants without snaps and life would be good.  But Target has an insane habit of always stocking things way in advance for the upcoming season and seldom things that apply to the moment, so there were no boys’ pants, only swimsuits and shorts.  So we went ahead and bought some shorts because by the time it’s hot enough that he’ll need them Target will be on to parkas, so we grab what we can when we have the chance.  We eventually found one pair of pants the right size without snaps hidden deep in a clearance rack, so at least there are two pairs of something he can wear until Milwaukee warms up enough to break out the shorts (which could be July–that’s not a joke.  My mom still brings up the time she came to visit for Independence Day and we watched the fireworks in the park in winter coats.)

In any case, before we could find pants we had to find the boys’ section in general.  But the boys’ clothes area is now camping gear.  Camping gear is now bikes.  Next to bikes is going to be a small grocery store, which is new and is going to be great to have down the street, but my kids are wary of this idea because they don’t associate Target with bananas.  The fitting rooms have been blocked off for remodeling and in their place is a temporary structure to use.  The walls in the entry and photo areas are now red.  We’ve been to Target three days in a row this past week and each time there have been large noticeable changes.  Who knows how fast it will all be switched around?

So I took a moment to photograph my favorite quirk about our Target before it possibly gets removed: 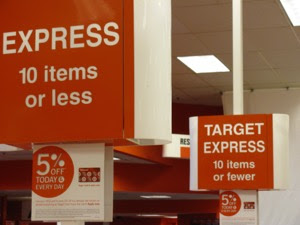 I’ve always found it amusing that there is an express lane for people who like colloquialisms and one for grammar nerds.  That I even noticed puts me in the latter category, obviously.  All things being equal I try to use the “10 items or fewer” lane.

Anyway, I was sort of surprised when I started looking for photos on my computer that these were the only ones I have of us in Target.  I suppose I shouldn’t be surprised, because we don’t tend to document the most ordinary aspects of our lives.  Trips to Target for us are as ordinary as it gets.

But when I think back on my own life, I wish I had more photos of really ordinary things.  I wish I had a picture of the Red Barn restaurant where we used to eat before it became a video arcade and eventually was torn down to make room for 696.  I wish I had a picture of the giant slide from my old school playground before they tore out all the play equipment for a parking lot.  I wish we had more pictures of our house before the addition was put on.  Places where you make nice memories are special, even if they happen to be part of a big chain or look impersonal at a glance.

I have watched my kids grow up in that store, the passage of time marked in changing shoe sizes and new backpacks and little toys bought at night to put under pillows from the tooth fairy.  So is it silly to be attached to Target?  I don’t think so.  It’s not as lofty as wishing my kids knew our local art museum as well as they know the toy aisles at the back of that store, but it’s part of their regular life.  It’s certainly American.  For most people on this planet our daily experience is not ordinary looking at all, which I think makes it interesting in it’s own way.

So we will continue to watch with interest the developments of our corner store.  And after July we can also pick up bananas there.
Posted by Korinthia at 4:40 PM