Just when you think you know your kids... (Babble)

I spent Mothers’ Day this year under a big heap of kids.  It was an especially clingy day, which was fine, except that my hope for the day was to get one thing done.  Anything.  I have so many projects lying unfinished everywhere it gets me depressed if I think about them, so I thought picking one and seeing it to completion would be great.  But no, that was not meant to be.  (But I suppose the same way I tend to work on Labor Day, being in total mom mode on Mothers’ Day rather than getting a break seems about right.)

That small issue aside, it was a lovely day.  Aden brought me breakfast in bed, which we shared.  (Toast, omelet, and water, plus a flower in a vase–that girl has gotten good at this!)  Then an hour later I got another breakfast in bed because Ian made waffles, so that was nice too.  The girls curled up with me for awhile to listen to a few more chapters of The Wonderful Wizard of Oz which we are trying to finish up in time for book club.  Then we did about a dozen trips around the block on bikes and a scooter.  I tried to follow Quinn because age four seems a bit young to keep pedaling out of sight, so I kept cutting through the alley in the middle of our block to head him off and keep track of where he was.  It was beautiful out, and a good day for kids to be essentially rolling along in circles (or, I guess technically squares). 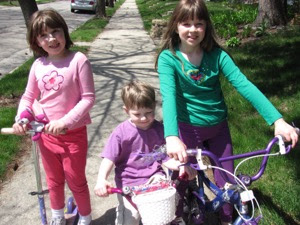 (Kids pausing just long enough for me to snap a slightly blurry photo.) 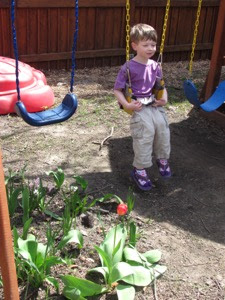 I also pushed Quinn on the swing for awhile, which he will happily do forever if you are up to it.  You can push him until he literally falls asleep in the swing.  Anyway, the funny thing about our swing set is that last year when we put it in, we installed it on top of a spot where there used to be a garden.  I had someone move all the bulbs to a different area of the yard, but apparently he missed, well, LOTS, so until the tulips are done we are down one swing because the kids don’t want to hurt the flowers.

Anyway, the big event on Mothers’ Day was my girls had a violin recital.  I would have sworn to you last week that I could have written the post about it ahead of time and just scheduled it to run on the day.  They’ve had two violin recitals in the past and they both went the same way.  Aden gets nervous but overall does fine.  She usually makes some odd mistake, but after a pause plugs ahead, finishes her song, and takes her bow.  And for Aden that was pretty much how it went this time too, except that instead of fretting about having made a mistake, she saw that others also made mistakes and didn’t beat herself up about it afterward, which is good.

But Mona’s experience was new, and I never could have predicted it.  In the past Mona was the first player on the program.  She would get in front of the audience wearing her velvet dress and shuffling along carefully in her high heel shoes.  She would beam at everyone, play her song, not care if she made mistakes, smile and bow….  Mona is charming on stage and always took recitals in stride.

But this year was different, and I’m kicking myself for not being better prepared, both as a mom and a violin teacher.  I did not grab her book before we left the house because she could not have had her piece better memorized.  She has been working on it for weeks and playing it up to 20 times a day in anticipation, but I should have known better and just brought the book along.  The other thing was I had Aden run through her piece outside before the concert to help her warm up, and I should have done the same with Mona.  But since Mona has never been nervous about performing before it didn’t occur to me.

This year Mona was third on the program.  When it was her turn to take the stage, she shuffled up in her high heels, faced the audience, and froze.  I could see it all over her face that she blanked on how the song went.  If I’d been sitting closer I would have offered her, “A, A, one, one….?”  But I couldn’t help her.  Her teacher asked if she’d like the book, but it was not the copy Mona was used to and had none of the pencil markings in it that would have jogged her memory.  She looked sadly at the book with her instrument under her chin, but didn’t know what to play.  My heart broke for her.

Her teacher kindly ushered Mona back toward her seat and announced we would try Mona’s part of the recital later in the program.  Mona took her seat between her sister and me, and pressed her mouth against my shoulder to muffle her sobs.  My poor sweet girl.
After Mona’s tears were done, I detached myself from Quinn.  Quinn is usually well behaved in public settings like concerts.  He sits still and claps politely, but at this recital he just flopped all over me and kept repeating, “This is long.  Why is this so long?”  What happened to my cooperative little guy?  In any case, after managing to convince Mona to ditch her high heels for a minute so we could more easily slip out of the hall together, we ducked out back.

I hugged her and told her it was okay.  I put her tiny violin on my shoulder and played her song so she could remember how it was supposed to go.  As soon as she heard the notes her face lit up in recognition and she said, “Can I try it now?”  I handed over the violin and she played through her song perfectly.  Just like she’s been doing at home for weeks.  I asked her if she was ready to go back in.  She nodded, hugged me, and said, “Thanks mom.”  We quietly took our places in the audience again.

At the very end of the program Mona was ready to give her song another shot.  Her teacher invited her back on stage, and again when Mona faced the audience she froze and asked for the book.  But this time she pushed ahead.  She made a couple of false starts, but then with quiet, even tone and nicely in tune, she played her piece.  She bowed.  She looked happy.  She helped herself to many snacks at the reception.
When I think of Mona I think of her like this: 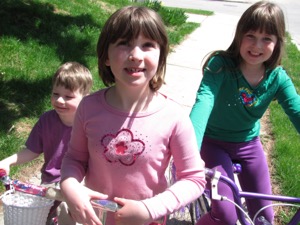 She can certainly be shy, but she’s often front and center.  She’s not usually concerned about what other people think, and although she’s flamboyant in her taste and expression, she does not seek drama.  Mona at one time was terrifyingly fearless, but she’s changed as she’s gotten older.  It’s hard to let go of old notions about people, even people you see every day who show you how they’ve evolved.  The Mona at the recital was not the front and center Mona.  She was a girl who wanted to be at the end of the line for receiving little ribbons to commemorate the event.  She wanted to blend into the background.  She was ready to take off her high heels when the performance was over. 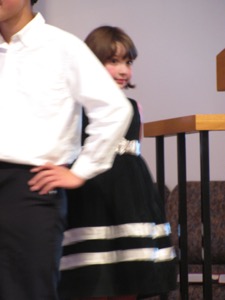 I’m so proud of Mona for hitting that stage again.  If she had left the hall without ever playing her piece I fear that experience could have stayed with her in a negative light for a long time to come.  Emotional events like that can be hard to shake, especially in a area like music performance.  But Mona played her piece all the way through and simply said, “Thank you” when people complimented her afterward.
My little girl’s growing up, and I’m glad every day that I’m around to see it.  Best Mothers’ Day ever.  (Even if none of my stuff got done.)
Posted by Korinthia at 4:19 PM