Little Voices, Big Music (plus a perfect trip to the fair) (Babble)

My girls just had their big end of the season choir concert on Sunday and their final rehearsal for the season this week.  Aden’s been singing with the Milwaukee Children’s Choir for three years now, Mona for two.  They both have pretty voices that sound even prettier together.  They both sing to themselves around the house every day. 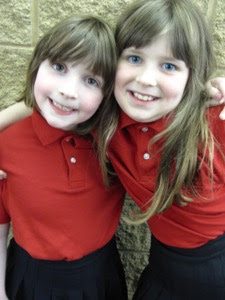 But this may have been their last concert with this choir.  Aden passed the audition necessary for her to qualify for the next choir level, but Mona is too young to move on yet.  If they sign up for next season Aden would be in a new group, and Mona would be on her own in the old one.  That makes each of them a little nervous, but the biggest problem is that as much as they like choir, they don’t like getting up and going to choir.  My kids love just being at home and doing their own projects or playing games or biking around the block.  They don’t like the hassle of having to be carted off to an activity.
I know exactly how they feel.  I have a terrible time tearing myself away from the kids after work to go to mandolin orchestra rehearsal, and subsequently I’m always late because I literally have to peel Quinn or Mona or all of them off me to leave so it takes me longer to get out the door without feeling like a bad mom.  (Luckily the mandolin orchestra is a forgiving group.)

I reminded my girls of how much they always enjoy choir once they get there, the same way I’m always happy to go play my mandola even though it’s hard to want to leave our home to do it.  But they are tired of the structure.  They love to sing, they like the people, but they don’t like uniforms, they don’t like standing for a long time or waiting for the other choir groups to finish singing at the concerts.  So we’ll see.  After a summer break they may change their minds, but I’m not going to push it.  I’m glad they’ve had the experience of performing on a stage in front of a large audience and being part of a polished show.  Aden has the option of being in the 4th-8th grade choir at her school next year and that may be a better fit for her, and maybe it’s time to sign Mona up for something new.  I think she’d really enjoy pottery.

So knowing it may be their last big choir event together I teared up more than usual at this concert.  Something about children singing can be so moving it’s hard to describe.  They are their most endearing selves when they sing, without any of the obnoxious messy bits that can be so frustrating.  Sort of like how perfect they seem when they are sleeping and you wonder how they could ever provoke you into yelling or needing a break from them.
The youngest choir sang first, and my favorite song was “Make New Friends” which they did as a round.  That had me crying enough that Quinn who was in my lap wanted to know what was wrong.  (I told him they were good tears, but he looked doubtful.)  They ended their set with a creative version of “This Old Man” that made everyone laugh.  I was impressed with how complicated some of the music they tackled this year was. 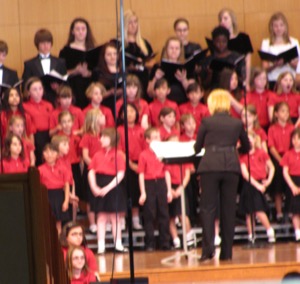 (Blurry photo from the dress rehearsal.  Mona is in the front row with her hands together looking the wrong way.  Aden’s two rows behind her to the right of that pole.)

In the second half of the program the more advanced choir sang two pieces composed by Paul Caldwell who was there to conduct them in person.  He talked movingly about a little girl who survived the genocide in Rwanda who inspired the pieces, and how he wanted to write a lullaby for refugees who had no one to sing to them.  If that doesn’t make you weepy nothing will.  All of it was beautiful, and frankly a nice show even if you didn’t have a kid of your own up on the stage to admire.

Also this last weekend we visited the little fair that sets up in a parking lot a couple of blocks from our home for a couple of days every year in May.  It’s small but flashy.  There’s a big slide and and tilt-a-whirl, a couple of stands where you can win prizes and spot where you can buy funnel cakes.  It’s the kind of event that can quickly turn from simple fun into nightmare with little kids.  The lights and the music and the rides and the cheap toys are so attractive for about twenty minutes, but it’s expensive and nauseating and wears kids out fast so we have to be careful not to go over that hump into disaster land.

That’s the beauty of it being within walking distance of home.  If you go all the way to someplace like the State Fair and pay for parking and admission, there is a lot of ground to cover, and it’s easy to overwhelm small kids past the point of it being any fun at all because you want to stay long enough to justify the trouble and expense.  But the weird little traveling fair?  We can go for ten minutes, walk home to use our own bathroom and eat dinner, and go back for funnel cake for dessert later.  So it was just enough fair, and it was great.

The only heart wrenching moment was when Mona wanted to win a toy frog.  There is a game called the Duck Pond, where you pay three dollars and you get to choose three plastic ducks.  On the bottom of each duck is a number, and whatever total the three ducks add up to determines which prize you get.  Mona won an odd floppy tiger thing the first time when just the two of us were visiting the fair.  Later that evening when we returned as a whole family, Aden won a similar floppy tiger and Quinn won a blue, very flammable looking dog.  Mona voiced her desire to try the Duck Pond game again because she was smitten with the stuffed frogs in one of the prize bins, but she didn’t beg or whine.  She seldom asks for anything and she was being so good I told her I would give her another three dollars to try again, but that she should know that the odds of her winning the toy she wanted were very small.  She accepted that and was very excited to try one more time, and promised not to complain if she didn’t win the frog. 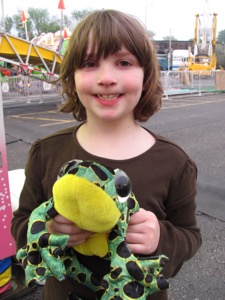 Of course she didn’t draw the right numbers to win the frog, and she was so disappointed she burst into tears and buried her face against her dad.  He told her he was sorry, but that that was how the game worked.  She said she knew and tried not to cry.  She did not beg or complain.  Mona was not trying to manipulate anyone and she fully accepted that she got what she got, but the loss hit her hard and it was obvious her tears were genuine.

The Duck Pond lady simply handed her the frog.

I could have hugged the Duck Pond lady.  I know we essentially just payed three dollars for a toy that was probably worth a nickel and it didn’t really cost the fair anything to let Mona have that frog, but that woman must deal with endless numbers of kids who barter and beg for something different from what they won and occasional parents who aren’t much better, so I’m sure she normally stands firm.  But Mona’s sincere appreciation of that toy (which she has dragged to bed with her every night since) made bending the rules the better way to go and I’m glad she did it.

Aside from that brief bout of tears there was no downside to the fair.  The Dizzy Dragons made us dizzy.  The slide was slide-y.  The funnel cakes were as delicious as they were bad for us. 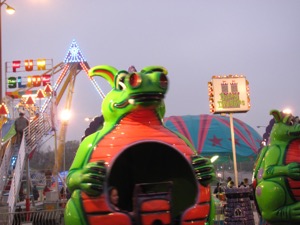 (Mona in the Dizzy Dragon)

And the added bonus was that on the second night of the fair, after the choir concert, Aden used her own money from her piggy bank.  I don’t mean bonus because I didn’t have to pay (although that was nice), I mean I got to see Aden at her best.  She doesn’t really have expenses at nine, and she doesn’t have a lot of opportunities to spend money she gets in her birthday cards, so she was excited to use some of it, and she used it on her siblings.  She bought Mona a ticket for the Dizzy Dragons so they could go on together, and she gave Quinn a ticket to ride the little car carousel.  Then she bought a funnel cake to take home for everyone to share.  I found that really touching.  Aden drives me up the wall when she drags her feet or doesn’t do her homework or pick up her stuff, but she’s one of the dearest people I know.

It’s so nice when something that is supposed to be fun actually is fun.  There are so many things that seem like a good idea until the reality of navigating them sets in.  So many outings with kids turn into adventures in using public toilets or futile exercises in compromise among siblings.  This year’s trip to the fair was perfect, frog tears and all.

(Side note:  This series of photos has me noticing Mona’s new trend of smiling with no upper lip.  I suppose it’s a step up from the old cute face pose, but I look forward to the return of that lip someday.)
Posted by Korinthia at 3:40 PM