I really don’t know if this is a good quality or a bad quality, but I get fixated on certain projects and don’t let them go until they are done. It’s tempting to declare this a good thing, but now that my husband’s home and I can see myself partly in his reaction to the things I do, I’m not so sure.

He was sort of stunned the other night when I took it upon myself to rearrange the attic before going to bed.  Our attic is really like a big closet next to our room, and it’s not like I went all out, but I wanted the things that belonged in there out of the hallway, and at this stage of my life I just can’t stand dumping things somewhere without a plan.  There were about half a dozen large empty boxes piled up making it impossible to put things in a decent place, so I cleared them out and re-stacked the remaining boxes so I could actually get in there and put the stuff in the hall away finally.  It was bugging me, and it made more sense to take ten minutes and get that done than it did to pile up stuff and have it add to a bigger problem later.  Anyway, from Ian’s point of view I looked sort of insane because it was late and I should have just gone to bed.  (From my point of view leaving it until morning meant it wouldn’t happen.)

It’s a good thing he wasn’t around when I worked on sealing the floor.  A few months ago I decided I wanted a few more coats of polyurethane on my bedroom, dining room, and living room floors.  I simply did a small section each night before I went to bed, moving furniture around as needed, and in a few weeks it was all done.  The only flaw in this plan was (and why my husband would have thought this was crazy) is my hair.  My hair is in everything.  I don’t how I’m not bald but my hair is everywhere.  And I’m so, so sorry, but just by reading this post my hair is probably in your house now, too.  Don’t ask me how, it just works like that.

Anyway, I got pretty good at sanding out bits of my hair that got sealed to the floors as I worked, but I’m sure my DNA is now preserved as part of this home.  That was a nice, satisfying project that kept me occupied for awhile, even if it looked a little nuts to the people who knew I was doing it.

But whenever possible I try to find projects where I get to include my kids.  I’m still pleased with our big clock, and it felt good to put our mark on the new garage.  My latest project has been to solve the problem of the light over the china cabinet area in our dining room.


There is a pretty archway over the top of the built in china cabinet and buffet that was once wired for a light but that spot has been capped over for some time.  A friend checked the wiring and said it could be made to work, but would need a pull chain because there was no decent way to put in a switch.  So for awhile we’ve had bare wires there, which was annoying, and then recently a base with a bulb and chain, but no decent fixture that would work over the bulb.  It’s not an important thing, but that bare bulb kept drawing my eye to it every time I walked into the dining room, and I just kind of wanted that finished already.  We tried different light stores, none of which could accommodate the pull chain for some reason, and after not finding anything I liked for that space I decided the only way out was a crafty sort of solution.

We picked up a six dollar fixture at the hardware store that could be screwed into the base and the kids and I started sorting beads.  We have a ton of beads, and in fact one of the great organizational boons of this house is that there is a butler’s pantry that we use entirely for art supplies.  I love having abundant supplies available in the house so the kids and I can do anything we dream up but that stuff can get so out of hand.  It looked like an artroom dumping ground before.  Now we have it better under control, and that gate leg table from Ikea is awesome because it has six drawers and if we need to open up a surface just for an art project we can.  (Having enough space for our stuff finally has made such a dramatic difference to my sense of peace.) 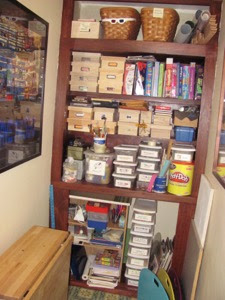 Anyway, we went through the box of glass beads and picked out all the green and clear ones to match the stained glass in the dining room, plus a few other random colors here and there if the beads were extremely pretty.  It was fun to have Quinn on my lap picking beads out of my hand and telling me excitedly if they were green.  I put Aden to work on stringing some of the beads in an attractive pattern. 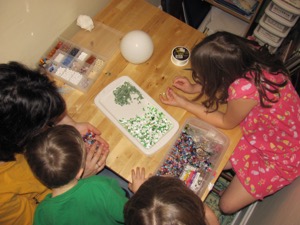 After the kids went to bed I struggled with trying to find a workable way to make the bead strands drape around in a nice dangly way, but that just wasn’t going well, so I finally hauled out the glue gun and wrapped the beads around the light cover.  It came out well, I think, and the kids are pleased that they helped with it.  It’s hard to take a picture of the light fixture that looks right, but this is a shot of it when it’s off: 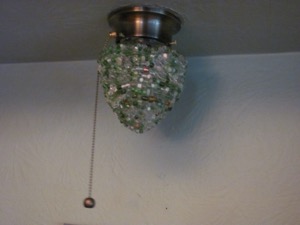 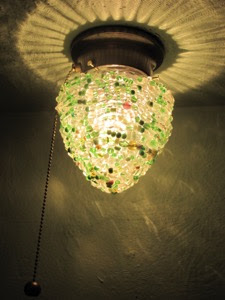 Ian likes it, too, even though he’s still not sure why I had to stay up until midnight to finish it and why I was screwing it into place before the glue had even cooled, but that’s okay.  It’s not like he didn’t know I was crazy when he married me.  And at least it’s the kind of crazy that results in organized closets and working lights and shiny floors with only a modicum of hair in them.  I like having a home where the practical elements are also personal.  It just sometimes takes a touch of obsessive crazy to get that to happen.
Posted by Korinthia at 6:56 PM