All in a Row (Babble)

Welcome to our land of lines.  My son, for as long as he has been able to manipulate small objects, has been laying things out in rows.  I know my daughters did something like this as well, but not to the degree I see it in my son.  (Or maybe they did, and it’s been swallowed up in my memory with so many of the funny little things kids do that seem like they will last forever while they are happening, but then vanish without announcement like so much ephemera.)  As much as I know my girls laid things out carefully when they were younger (and to some degree still do), Quinn lays things out in rows with a consistency that I find noteworthy.  For him there is something compelling about laying things out in rows, and it becomes a part of every game.

This is Quinn making a store for some of his toys: 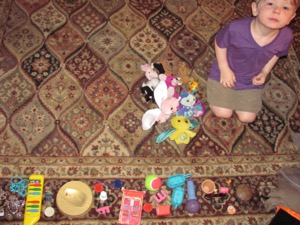 This is a typical sight on our deck: 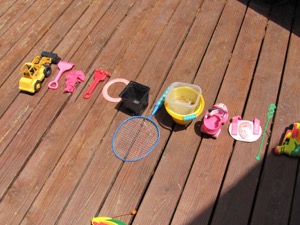 Here’s Quinn at the Independence Day Parade laying out his candy haul.  (I don’t remember any candy at 4th of July parades when I was a kid, but my children do about as well at our local parade as they do at Halloween some years.) 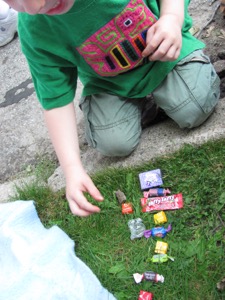 This is his idea of helping me in yard: 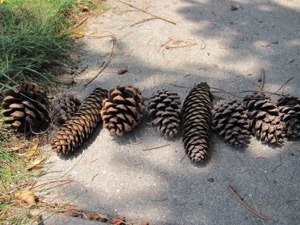 At least when Quinn gets toys out the mess is sort of organized: 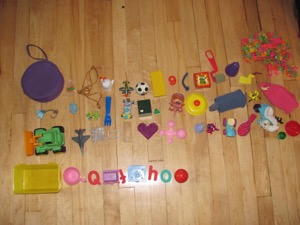 I do wonder how much this tendency will translate into a personality that appreciates order when he’s older.  Not that I have delusions that he’ll keep his room neat as a teenager or anything, but you never know.  My brothers used to actually make their beds as kids, so such a thing can happen.  But I know I’m happy when I get a chance to lay out all my tools in a row at the violin shop, and I like it when my spice jars are evenly displayed on their shelves in my kitchen, so his penchant for lines isn’t foreign.  He probably got it from me.  There are certainly worse things he could have inherited!
However, this was his idea of putting away the things from the dollhouse when I asked him to pick up the living room before he went to bed, so my hopes aren’t high for too much order in the future: 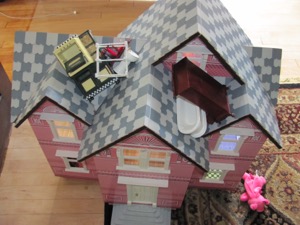 In the meantime, at our house, you can count on the fact that all our ducks (and trucks and magnets and marbles….) are all in a row.

Posted by Korinthia at 7:58 PM