I’m not feeling well this morning.  All night I had a dizzy thing going on.  I felt (feel) a bit queasy, and every time I opened my eyes the room was spinning around like I’d just gotten off a tilt-a-whirl.  Very weird.

Anyway, Ian decided not to go do work at the violin store today until I’m feeling more normal and told me to just stay in bed for a bit.  I’m still kind of in the mindset I had when he was gone that I don’t get to rest because there are kids to take care of, so it seems odd to be just sitting doing nothing.  I took some ibuprofen, I checked email.  Ian told the kids I wasn’t feeling well so they played more quietly than usual.

I was glad when Mona conveniently forgot she wasn’t supposed to disturb me and came bounding onto my bed.  She and Quinn cuddled up while we did “school” on my laptop.  We’ve been trying to get them ready for school starting up next week, so for the past few weeks we’ve had a rule about no screen time until all of them have had a half hour of school review.  We have a white board propped up in front of the fireplace and Mona works on writing her numbers clearly and writing out her full name and copying words and sentences.  Aden works on spelling and writing her address and multiplication tables.  (Although the most important thing I’ve probably taught her in the past couple of weeks was how to play Heart and Soul on the keyboard.  She’ll get some good social mileage out of that in third grade.)  Quinn can write out most of his alphabet and numbers, and he likes learning about telling time.  (My favorite was the morning I asked him to write the numbers one through ten, so he carefully wrote a one, and then a ten, and said he was done.  I knew to explain it better for next time.)

All my kids like these flash cards I picked up from the dollar bin with landmarks on them, although they can’t remember the Alamo is in Texas and they think Big Ben is in the United States somewhere.  This morning I just typed sentences on my computer for Mona to read out loud, mostly about dogs and purple bunnies to make her laugh.  Quinn typed out the alphabet of his own accord, and then everyone left again and I realized I was hungry but too dizzy to want to go downstairs. 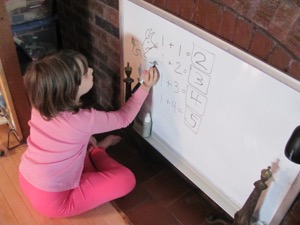 And then, Aden appeared.  She’s so grown up lately.  I just can’t get over how tall and capable she is anymore.  She’d made me breakfast in bed.


Now, Aden is a sweetheart, and she has been making me some form of breakfast in bed for years when I’m not feeling well or on my birthday or some such occasion, but she’s old enough now that it’s not just cute, it’s good.  When she was three she once brought me two uncooked eggs on a plate, a fork and a napkin.  Today she brought me rice crispies in milk with a spoon, a hard boiled egg on a plate, toast, butter on a bunny dish with a little knife, and a cup of water.  It was just what I needed.  She sat with me while I ate and we looked at pictures of cute animals doing cute things on my laptop.  She said she was worried about me trying to walk down the stairs but thought I might be hungry.  I told her someday she’d make a great mommy and she looked very pleased.

I’m so impressed with the person she is and the adult she’s becoming.  She’s got a few habits and quirks I wish I could wave a wand and fix, but the same is true of myself so I try not to hold her to too high a standard.  I love that she wants to do more things on her own and still be my little girl.  She makes a really good omelette.  And yesterday she and Quinn asked if they could make sugar cookies and they did everything on their own but put the cookie sheet in the oven.  (I’ve even told Aden I trust her to do that, but she doesn’t want to, yet.)  I could hear them in the kitchen together with the recipe book, cracking eggs and running the mixer.

Aden made cookies the first time essentially on her own when she was four.  She wanted cookies and I needed to work (and Ian was deployed for the first time so he wasn’t available to help), so I had the recipe next to me on the violin bench and I would explain each step as needed and she’d run off to the kitchen.  I’d tell her to do things like find a measuring cup with a 1/2 on it and fill it with flour five times in a row, and leave her to it.  She followed rules like ‘no adding things to the mixer while it was running,’ and I figured the worst that could happen was a messy kitchen and some nasty cookie dough that we have to do over, but aside from a delicious smelling accident with the vanilla she did fine. 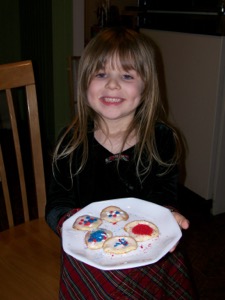 (Aden on Christmas in 2006 with her first Easy Bake Oven creations.) 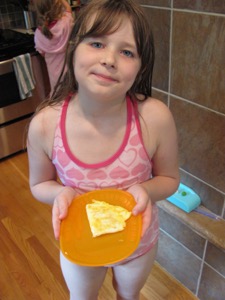 (Aden a couple of weeks ago with a perfect omelette.)

In any case, I’m feeling a lot better than a few hours ago.  If I have another dizzy night tonight I’ll call the doctor, but today breakfast prepared by my daughter and served on a tray that used to belong to my grandma seems to have set me right.

Aden wants to tackle pancakes next.  Sounds good to me!  By next year breakfast in bed might be really something.  I love my Aden the cook.
Posted by Korinthia at 7:04 PM