Things That Go CRASH in the Street (Babble)

I always wonder when I pass an accident on the street when it will be my turn.  The odds are just too great against every driver paying attention all the time.  Well, today was my turn, and as far as such things go I think we got off easy.  No one was hurt, it wasn’t the most impossible time or place to deal with it, and there wasn’t any annoying insult added to the injury by it raining, or my somehow having gone out in my pajamas or anything.  It’s just inconvenient.  I have bigger things to worry about and this was just a fender bender. 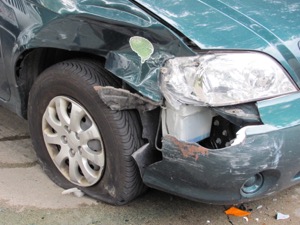 Flat tire and dripping.  And yes, that is a now squished picture of a green brain on the fender.  That was a magnet I got from my brother the brain mapper that made spotting my van in a parking lot a little easier.  We got hit in the brain!


And look what I learned about the inside of my bumper!  That white stuff is styrofoam!  And all the bits that snapped off my car are plastic!  I’m sure other people knew this, but I honestly didn’t know that I was driving around with a bumper that was just an oversized packing peanut.  I think the packaging my children’s toys come in is tougher.

I’ve only ever been involved in one other real accident before and that was about fifteen years ago.  That was complicated because Ian and I may have been living in Pennsylvania, I think the car still had Ohio plates, we were driving in Oregon, and we were hit by someone from Washington.  Oregon was a no-fault state so nobody cared that the other guy ran into us, and I’ll never forget the insurance person in Portland saying that the cost of the repairs to the door would exceed the value of our car so she wanted us to give her the keys.  We had no transportation back home if we did that so we refused, staring at her outstretched hand in disbelief.  The car still worked and was not unsafe (just unsightly and the driver got a little wet when it rained), so we struck some deal that we couldn’t ever file a claim but we could keep the car and our insurance.  Yuck.

Anyway, this time I’m hoping the other person’s insurance pays for everything, especially since the cop who wrote the accident report agreed I had the right of way. 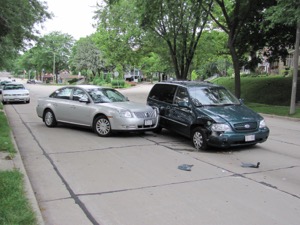 The other driver was pulling away from the curb after I had stopped at that sign you can kind of see between the two cars and had made my left turn.  She was really mad and kept saying I hit her.  I understand that the street I was coming off of was in an awkward place for her to see, but when she kept repeating, “I looked over that way and didn’t see anyone coming,” I just kept thinking, “I believe you didn’t see me!” but that doesn’t help her case since I was obviously there.  I wish my minivan had the kind of pickup while loaded down with all my kids and the air conditioner running to reach the kind of speed after a stop that she thinks I managed, but it’s just not true.  I felt bad for her because it was a frustrating situation all around, but I was not about to cave and say it was my fault just because she wanted to see it that way.

I don’t know how people who don’t have anyone who cares about them get by in life.  I was able to call my friend Carol to come out and help me, and I’m not sure what we would have done otherwise.  (I learned the hard way, though, that there is a dead spot for my cell phone right where we crashed.  Trying to read those sixteen digits on my card to AAA before the signal cut out was impossible.  After my third failed attempt to reach Carol I convinced the woman who hit me to let me use her phone and she was none too pleased, but I give her credit that she wasn’t so unreasonable as to leave a mother with three kids stranded there in the road.)

Carol loaded my kids in her van after two of them announced they had to pee and she took them back to the violin store a couple of blocks away, which worked out well because I was supposed to meet a customer there and she was able to handle all of that while I waited for the tow truck.  She even had the most perfect timing in the world when she returned for me, because the tow truck driver had just asked me for the key to the van and I realized I’d handed all my keys to Carol in order for her to get into the store.  She drove us home and made me laugh, and now I have yet one more reason to add to the collection of thousands that I am grateful she is my friend.

My kids are so sweet.  After they got over the shock of “Flat tire!  Dripping!” they played with sticks they found on the ground for awhile, and when I said something about the damage being expensive to repair, they looked serious and stopped playing to stand by me.  Aden took my hand and said, “You can use our money.  I don’t know where some of it went, but we can look for it in our room and you can have it all.”  Her brother and sister nodded in agreement that that was a good plan.  I told them that was very kind, but that they didn’t need to worry about it.  So they didn’t and went back to their sticks.

Luckily we do have a second car and not too many places to be anytime soon, so we’ll see.  I just hope dealing with the other person’s insurance company isn’t too hard.  I’m not sure how any of this works yet.  I still think it’s funny that AAA wanted me to tell them the name of the auto body place I wanted to be towed to before they would dispatch a truck.  Why would I know the name of an auto body place off the top of my head?

Anyway, supposedly my van is waiting like a crumpled Christmas morning surprise at some car shop within a couple miles from my house that I have to track down.  Not my first choice for use of my time, but the kids and I will try to make an adventure of it somehow.  (And some people wonder why I don’t build more violins….)
Posted by Korinthia at 9:02 PM