Someone asked in a comment thread something I get asked in person all the time:  How much contact do I have with my husband during his deployment?

The answer is not much, but way more than people had before email.   My grandmother actually gave birth to her second child while my grandfather was off in the Navy during World War Two, and there was no way to tell him he had a son.  She wondered for very long periods of time if her husband was okay.  That sounds unbearable.  By comparison, the longest stretch I’ve gone without hearing from Ian is maybe a month.  I’m able to scan things to show him if I have questions about bills or taxes.  He sends me brief notes on important days like anniversaries.  A couple of times we’ve been able to talk to each other on Skype, which is interesting because we’ve gotten to see the room where he lives and works, but the time difference is a problem.  Iraq is nine hours ahead of Wisconsin, so he’s usually going to sleep as we’re getting up, and there is no good time to talk.


I feel badly that I haven’t sent him as many packages as I should.  I sent one big one before his leave and one after.  I usually send DVDs of the kids, photos, artwork the kids made, a local paper of some sort, cookies, a letter, and anything else lying around that would remind him of home.  The hard part about putting together a package (besides making sure any food won’t melt or rot in the 135 degree heat over the two week journey) is sending things that are meaningful without being too precious.  Ian worries about leaving things behind when he comes home.  I assure him the photos are replaceable, the kids are always cranking out artwork, and none of us would mind if he passed on little gifts to people there.

He’s sent a couple of things to us, including a toy camel, some pretty chai sets that the girls adore, a small vase….  My favorite things are the rare letter, and the last deployment he sent me a simple necklace with a pearl on it that I wear quite often.  I don’t write him as much as I should, but he does follow this blog, and I do email notes reminding him he’s missed and we love him.  I figure with limited time on my hands my priorities have to be with my kids and our life here.  He’s an adult and I trust him to take care of himself and to remember we love him even if we don’t get to tell him every day.  If I have a choice between playing a game with the kids or writing to their dad, I hope he understands that I need to focus on the kids.

The hardest thing about communicating with my husband while he’s overseas isn’t the how, it’s the what.  We can stay in pretty good contact using a combination of letters and email and Skype and occasional phone calls, but time apart makes what to say harder to come by.  It’s often easier to find things to talk about with someone I saw yesterday than it is to someone I see rarely.  That seems counter-intuitive, since there would be more to catch up on with someone you haven’t talked to in a long time, but you lose common ground.  The flow of conversation is harder to establish when there is too much to tell.

With Ian it gets very frustrating because we are used to talking to each other easily, but after so many months apart once we say, “I love you, I miss you,” several times, it’s hard to think of anything to add.   He doesn’t have a current idea of what our lives are like at this point–small changes add up and turn into big changes.  Anyone with little children knows how much is different in just a few months, let alone a year.  We’ve moved, the kids are older, there are new people in our lives he doesn’t know….  I’m sure I’ve changed in ways I don’t even realize.  And the thing is if I try to describe things really well, in some ways I think it only highlights for Ian how disconnected he is from us now, rather than helping him feel included.  No one wants to have home explained to them.  In the meantime I can’t relate to what his days are like at all.  Most of what he describes I either don’t understand or don’t want to know because it scares me.  He doesn’t want to add to my stress, but everything about him being in Iraq causes me stress, so what can he say?  Not being able to find things to talk about makes us both feel bad, so just because we can talk doesn’t mean it’s always a good idea.

We’re also both limited by what we are allowed to say or simply shouldn’t.  From his end, my husband is an officer, and privileged to sensitive information.  He can tell us a little bit about what he’s doing, but sometimes in emails he has to change names of places and people.  Email is convenient but not private.  We have to assume whatever we write may be seen by others.   That could include the people he’s fighting, so for safety reasons he can never tell me when he’s coming or going.

On my end, it’s unfair to burden him with any problems he can’t fix.  It’s a nice idea to keep him informed of important details, but I can’t tell him about a trip to the emergency room, for instance, until it’s resolved.  I can’t tell him anything with loose ends because it’s cruel.  I don’t want him distracted because he has dangerous work to do.  Complaining to him about my problems would be selfish, but I don’t want to lie to him either.  If I told him everything was perfect he would worry because he would know that wasn’t true.  So I keep him informed after the fact.  Quinn was sick but now he’s fine, the insurance thing at work was messy but now it’s taken care of, selling the old house was tricky but now it’s done.  When I talk to Ian on the phone there is a time delay not just in the sounds we’re hearing, but in the topics we can discuss.  It’s awkward, but it’s what we’ve got.

Our circumstance may or may not be typical.  He tells me for most soldiers it depends on time and opportunity.  He knows other people who contact home every day because they have the free time to do it.  Ian tends to be extremely busy with no days off.  (People always seem surprised when I say he doesn’t have days off, and I remind them it’s a war.)  It’s usually inconvenient times like midnight or very early morning or dinnertime here when he would be available to chat, and most of the time that doesn’t work out well.

Recently we had a discussion where he asked if I could please find a way for him to talk to the kids one on one when he calls.  I’m used to having all the kids with me all the time, so when he calls I tend to put him on speaker phone and then it gets to be a mess.  I explained to the kids that we’d have to take turns and be in different rooms, and they agreed, and the last call went much better.

In terms of making decisions, my husband trusts me to make choices that are good for our family and our future.  That’s part of why he loves me to start with.  When it comes to our home or the kids’ school or major purchases, he knows I’m not going to get us into debt or do something ridiculous.  The craziest thing I did was move, and it was the right thing.  It was hard to do without him, but I’m glad I did it.  I can take care of everything with him gone, I just prefer to do it with him.   Some things he definitely does better than I do (he doesn’t cry about computer problems, for example), but I know for a fact he doesn’t really want to pick out rugs or futon covers.  We make a good team.  I’m just looking forward to the team all being in the same time zone again. 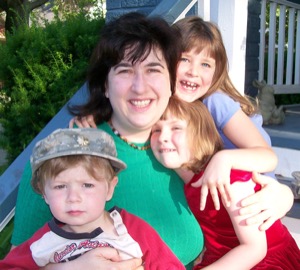 (A picture Ian took of us almost exactly one year ago when I was first putting together this blog and Babble needed photos.) 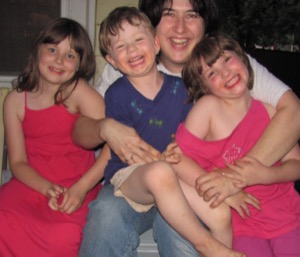 (This is a photo of us exactly one year later taken by Aden’s friend Karla.  My baby isn’t a baby anymore, Aden seems more grown up, and Mona’s clothes don’t stay on very well.  But it’s still us.  I think Ian will know us when we finally meet him at the airport and decide we’re worth coming home with.)
Posted by Korinthia at 9:34 PM