Things that are easier with two adults in the house (Babble)

I’m looking forward to my husband coming home for all kinds of obvious reasons, but there are lots of little ones that present themselves every day that seem highlighted as we get closer to that magical date.   Here are the ones that jumped out at me in the past couple of weeks:

Changing a futon cover.  This is much harder when the only people around to help were born this century.

Trying on clothes.  It’s not just hard when your kids are little and scrambling around the dressing room, it’s also annoying when they are old enough to share their observations and opinions while you’re trying things on.  (Not that they are wrong, I just don’t enjoy the critique.)  With the exception of a few things I ordered through a catalog back in the winter I have all the same clothes I had when Ian left.  Not that I’m a big clothes shopper, but I just have a feeling if Ian was stop-lossed for the rest of our lives I would be wearing the same six outfits until the kids left home or I died, whichever came first.

Finishing any yard work.  Impossible.  I know there must be single parents who do this, but I can’t figure out how.  Inside chores I can handle because if all the kids are in the house with me somewhere I’m not worried about them.  Keeping track of three kids running loose outside is trickier, especially since the younger ones want to follow the older ones into dangerous territory.  Yard work has to be done in daylight, so it’s one of the few things I can’t do after they go to bed.  I can whack weeds for a few minutes at a time at best before someone wants to bike someplace out of sight, or needs help crossing the street, or I have to restrain Quinn from flagging down yet another ice cream truck.  Our yard will look so much better when Ian comes home.


Attending parades.  This probably wouldn’t come up too often anywhere else, but one of Milwaukee’s nicknames is ‘Festival City,’ and there are events and festivals all summer long.  (Summerfest, Asian Moon, Indian Summer, Irish Fest, German Fest, Pride Fest, Festa Italiana, South Shore Frolics, Bastille Days…..  Good grief if you are bored and within driving distance of Milwaukee you have no excuse for it.)  There are fireworks almost every weekend and lots of parades.  We skipped a big parade and street festival with fireworks this weekend and my kids didn’t care because we just did a lot of that for 4th of July.  I knew the Independence Day events in our neighborhood park would be trouble without another adult along, but I didn’t see a good way out of it. 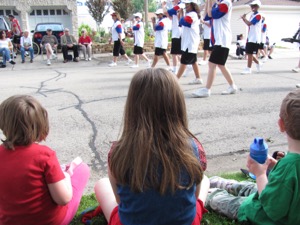 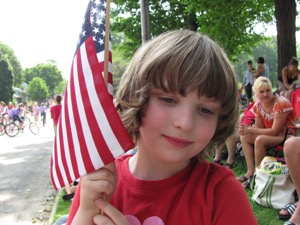 4th of July (even though all of this was on the 5th for us for some reason this year—Milwaukee is not famous for doing holidays on the actual days) is something our city definitely does right.  I’ve always liked the 4th of July, but when we moved here I was absolutely charmed by all the festivities in our neighborhood park.  The day starts off with the parade, then there are kids’ games in the park and a contest for decorating bikes and wagons and baby buggies, a talent show, live music, and fireworks after dark.  We also sometimes have giant sausages that run races and dancing dogs, but that’s a different post.

Anyway, without another adult to help with potty breaks, etc., I told the kids we could do the parade and the fireworks, but we’d have to go home in between.  I knew even that would be too much in the heat, but how can you deny kids a 4th of July celebration?  You can’t.  So we went, they got tired, and when Quinn asked for water and I gave him some it was the beginning of the end.  I don’t know if the bottle was the wrong color, or if I gave it to him with the wrong hand, but when a three-year-old hits his limit you can do everything right and he will still fall apart.  I ended up carrying his bike while he stomped along by his sister and hollered, and a block from home Mona had a wipe out on her scooter and scratched up her face and her knees.  I instructed Aden to work on getting her grumpy brother the rest of the way home while I went ahead and tended to Mona’s wounds.  On top of it all my Birkenstocks betrayed me and my normally most comfortable sandals cut up the tops of both my pinky toes.  I had to bandage myself up along with Mona before I could go back out and scoop up screaming Quinn and dump him on the couch where he slept until almost dinnertime.  Fireworks went infinitely better because we went with my neighbor.  It’s so freeing to have that second adult along! 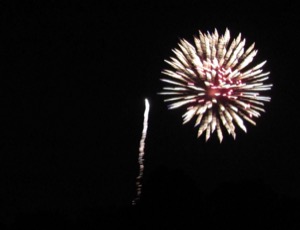 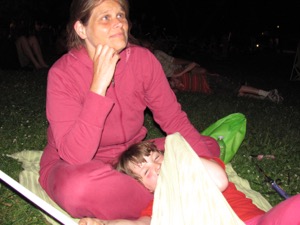 (Mona snuggled up with Julie at the fireworks show.  Those aren’t rosy cheeks on my little girl, those are her scooter accident scratches, poor thing.  She heals fast, though, and now looks fine.)  I am done with parades until Ian gets home.

Watching scary movies.  I’d really like to see Shaun of the Dead but I keep bumping it further back in my Netflix queue.  Until there is another adult around I can’t afford to be thinking about zombies while there is laundry that needs doing in the basement.  Someone needs to be a grown up around here, and scary movies make me less of one for short periods.

Taking naps.  Sometimes I could really use a nap, but unless I can convince a quorum to do it with me, there’s just no way.

Parties.  I can do play dates and I can handle people staying with us no problem, but I’m still relieved Ian happened to be home during Aden’s birthday bash.  If I had to throw some kind of emergency party between now and when Ian comes back I would have to enlist another adult to help out.  On the actual 4th of July (not to be confused with all the excitement on the 5th) a friend came over for the afternoon with her two kids and they stayed for dinner.  Just being able to split the work up a little by having her set the table while I cooked, or having her cut up the watermelon while I stirred things on the stove was pleasant and civilized somehow.  I felt less like a zookeeper and more like a hostess. 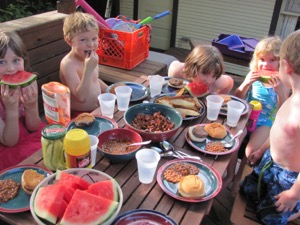 Going swimming at the Y.  Quinn is the only child in the world who has never peed in a swimming pool.  This is good, but it means at least once when we’re in the pool I have to take him out to use the bathroom, and depending on how busy the pool is I usually end up dragging both girls out to go with us.  Plus having all three kids with me in the changing room can be a bit much.

I would say grocery shopping, even though it’s definitely easier to do that alone if there is someone to leave the kids with, but this is one area I have finally mastered, primarily due to the convenience of Aden being older.  Aden pushes one cart with her brother in it, and they make up stories about the different food items in the cart (“Oooh!  The watermelon is your new friend!  Should it have a play date with the cheese?”) Mona pushes a second cart, and I walk ahead and pretend I’m trying to lose them as I look for what I need.  If I act like they can’t keep up with me, they actually pay attention to where I am and stick pretty close.  (This is especially handy in Target when they are getting pokey–I just slip into the next aisle saying, “They’ll never find me over here,” and next thing I know they are all at my side.)

Anyway, no matter how good I am about making them use the bathroom before we start shopping, someone has to pee by the time we are on the other end of the store.  This used to make me insane because the hassle of getting everyone to the bathroom in time and leaving the cart outside the bathroom, etc. was never ever fun.  Now either Aden can take herself, or take one of her siblings if they need to go, and they catch up with me in frozen foods.  So it’s still an event to go shopping with all three kids all the time, but it’s never bad anymore.  They don’t whine or cry, they are just slow and distracted because they are kids.  I’m used to it, but I’m still looking forward to buying food by myself again from time to time.

I’m so lucky that most of my problems aren’t really problems.  Life without Ian is inconvenient and not as much fun, but we still have a very nice life.  It’s just not the life I want most.  Many people never gets anywhere near this close to what they want, so I don’t take that lightly.  Life is great.  I can hardly believe it’s about to get better.
Posted by Korinthia at 9:13 PM