House on the Rock

On the Sunday of Thanksgiving weekend we arranged to meet with my brother and his baby at a crazy halfway mark between Milwaukee and LaCrosse.  We decided to explore House on the Rock, which claims to be the most visited tourist attraction in Wisconsin.  You are forgiven if you live outside of Wisconsin and have never heard of it.  And I say "claims to be" because it's hard to trust anything you see or hear there.  Few things are labeled, much is left up to interpretation, and all of it is bizarre. 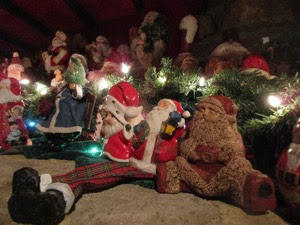 It's amazing.  And weird.  And amazingly weird.  It's not often that I end up in a space where I am surprised around every corner, but we literally didn't know what to expect as we walked from room to room.  Except for Santas.  For Christmas they had 6000 Santas set up, tucked in every corner and on every shelf.  It was a stunning amount of Santas.


There is the Infinity Room (which Aden fled from once she felt it swaying beneath her feet).  Like many of the rooms it had a carpeted ceiling.  Are you asking why?  Don't ask "why" at the House on the Rock.  The whole place is built on a foundation of "why not?" 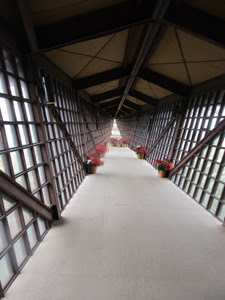 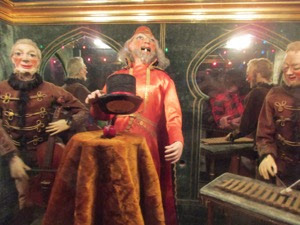 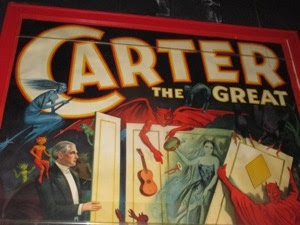 There are things to question in every room.  If you know Asian art, well there is a lot of stuff to ponder and maybe laugh about.  If you know guns, then the display of firearms that included a couple of guns with extra parts was suspicious and obviously fake.

For me, of course, it was the instruments.  Whole rooms that played music (for a token) were set up with instruments that seemed to be really playing (like the drums and the player pianos), along with others that couldn't have been.  I think many people who casually observe the violins all hooked up with wires like some sort of Borg orchestra busily bowing and moving, might believe they were actually doing something.  But as a concept it can't work because the crazy things would need to be tuned too often.  On close enough inspection, a lot of them didn't have strings or bridges or hair on the bows, so no, they weren't really playing.  But they were quite a spectacle. 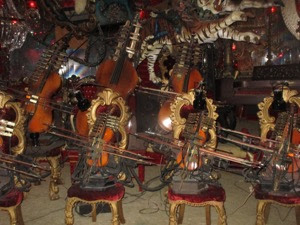 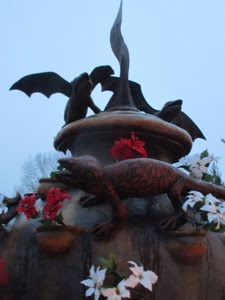 The whole place is like that, where it's hard to know what is happening, because it's all presented in such earnestness and with the trappings of a serious real museum.

I do have to say, however, that it was all much much nicer than I was expecting.  What little I knew of it before I got there I assumed would be cheap and kitschy, but a lot of it was beautiful and tasteful, much of it was simply confusing, and none of it was boring.

We ended our visit to House on the Rock with what claims to be the largest indoor carousel in the world.  You can't ride it, but that doesn't matter.  The whole room is overwhelming enough it feels like you rode something by the time you step out the door back into the open air.  (All carousels since have looked rather plain to us.) 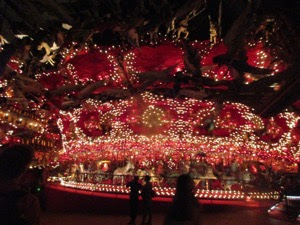 There is a lot more I could say, but honestly I wouldn't want to spoil the fun.  In this world of virtual experience, some things need to seen in person to appreciate.  If you are near Madison, Wisconsin (but it's not Tuesday or Wednesday), and feel like driving driving a ways into the middle of nowhere and you have a whole afternoon and feel like spending money on something truly strange, I recommend House on the Rock.  (Because why not?  Why not indeed.)

Email ThisBlogThis!Share to TwitterShare to FacebookShare to Pinterest
Labels: Borg violins, carousel, House on the Rock