There is a lot to write about lately, but very little time.  I want to tell you about the kitchen renovation, the annoyance of living without a kitchen in a house with five people, how we started Halloween costumes early, school, cool things we've seen, thoughts on life and the world....  But in the small window for blogging I have available this morning I'm going with Tinker Toys.

Several months ago I was hanging out with the kids and I don't remember exactly what we were doing but I wound up mentioning Tinker Toys.  They'd never heard of them.  This seemed impossible to me, and I promised the next time I was out I'd pick up a set.

So not long after that Quinn and I were at Target and we looked up and down the toy aisles, but even in the area of "classic" games they didn't have any Tinker Toys.  I asked a store person (who looked like he was in his twenties) if they carried Tinker Toys and he said, "What are those?"  He dutifully started searching for them on his phone to figure out what I was asking for.  In the meantime another person working in a nearby aisle had overheard us, and she, being about my age, said, "You know, Tinker Toys!  With the sticks and the little round pieces with the holes?"  So the generational divide when it came to what I thought was a ubiquitous toy was painfully obvious.

Flash forward to last weekend when we enjoyed a couple of stops on this year's Doors Open Milwaukee tour.  We spent a good chunk of our morning at Flux Design where a friend of ours works, and that was incredibly cool, and then we figured we had time for maybe one more place before we needed to head home.  We selected the Chudnow Museum of Yesteryear for sheer obscurity.  We'd never heard of it, knew nothing about it, and it was in a pretty building that we pass all the time and had never noticed.


The Chudnow Museum is this wacky place that was some guy's private collection of all things old and once common from the Milwaukee area set up and displayed in a house now overlooking the freeway.  There is an old pharmacy and grocery store, a little soda shop, a wall of writing nibs, lots of printed material from the Master Lock company, a bit about women's fashion from the 20s and 30s, a barber shop tucked into a corner.... It reminded us the Streets of Old Milwaukee display at the Public Museum, but all crammed into one house.  It was weird and funny and rather wonderful.

In any case, on the second floor was a room dedicated to toys.  And, of course, behind glass on one wall, looking dusty and ready to disintegrate from sheer age, was a set of Tinker Toys. 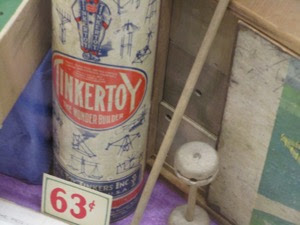 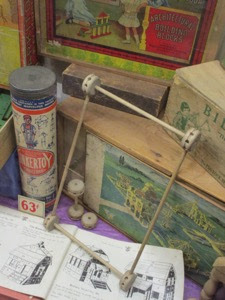 I was admiring a nearby dollhouse when I heard Quinn laugh and exclaim, "Mom!  I found you some Tinker Toys!"  And sure enough, preserved in the Museum of Yesteryear, a little piece of my childhood.  On display because it's so damn old it is now just a curiosity.  Good grief.  I felt the same way I did when we found "Pong" on display at the MoMA, along with a bunch of historical album covers on a wall that I still play the records from at home.

So I am officially old enough to be in a museum, and ripe for one of those projects where kids come and ask you questions about life in olden times (like, how did you survive without the internet?!) before you die and that important knowledge of our ancient ways is lost forever.  I kind of want a shirt now that says, "Ask me about Yesteryear!"  Or at least about Tinker Toys.  (Which, frankly, weren't that fun.  There was always some angle you wanted the sticks to go that wasn't going to fit together right and it was annoying.  Let us not pine for Yesteryear.)

Posted by Korinthia at 8:58 AM