Our kitchen renovation began in the middle of August.  It's exciting!  And messy.  And inconvenient.  But it will be beautiful!  Just not at the moment.  Want to see pictures?  Of course you do.

Here is the kitchen from a few angles the last night before it got torn up.  (If you are thinking "But that looks nice!  Why would you gut it?" please review exhibits A through, oh, let's say Q, here.) 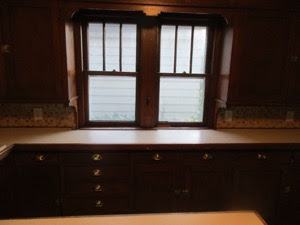 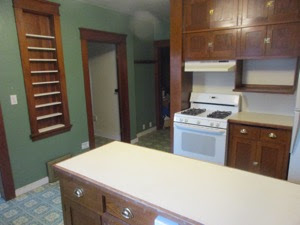 And here is everything in stages getting all torn up.  The floor had to go, the ceiling became a mess of holes awaiting can lights, etc. 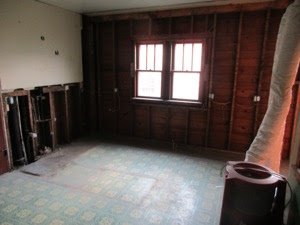 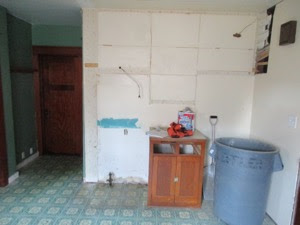 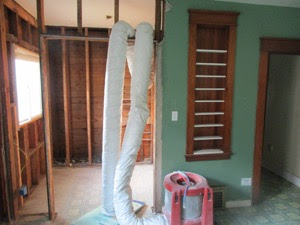 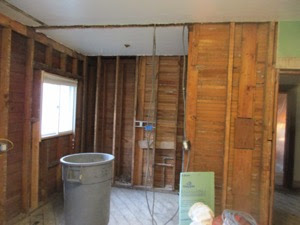 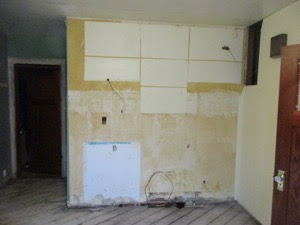 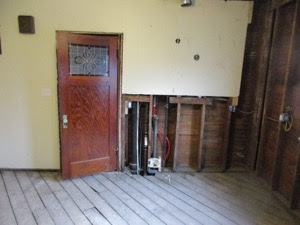 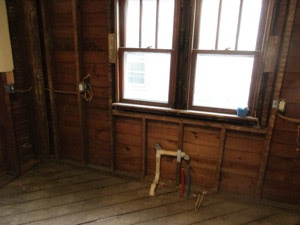 At this stage you could see between the floor boards which was a little unnerving.  I was impressed that the workmen thought to go into the basement and put tarps over everything down there. 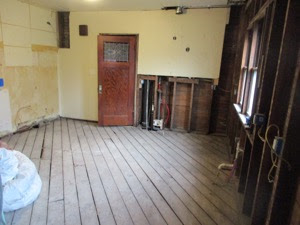 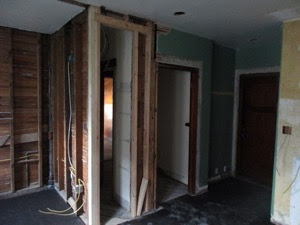 The family room, which is the path from the back hall to the back door, was turned into a bubble tunnel for a few weeks.  There were poles supporting big sheets of plastic with zippers in them so we could still access the space on either side of the tunnel.  Watching the TV on movie nights in the bubble got really warm.  The other bubble had the vent with the air conditioning, so that one was cold.  When they finished all the really messy work they took the bubble tunnel down.  We don't miss it. 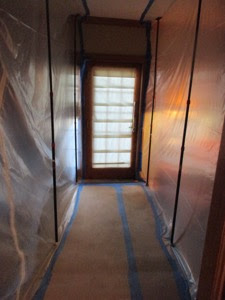 We were excited to watch the installation of the new stove vent!  During part of that work someone caught that something in the plumbing from the bathroom above was leaking, so we had to have the plumber come in and address that to prevent future disasters, so that was an unexpected expense, but better that now than bigger problems later. 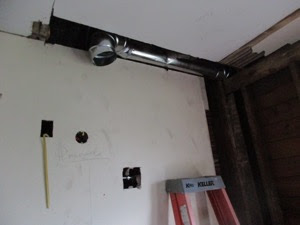 New floors awaiting installation!  Maple to match the rest of the house. 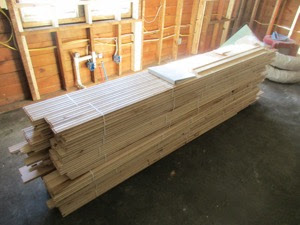 In the meantime all the things in the kitchen that we can't really use are in the basement.  I did most of that while the rest of the family was at the cottage in July.  It was a good chance to see what we had and what we didn't need and I took about five bags of things to Goodwill.  I'm not planning on putting anything in the new kitchen that we don't actively use. 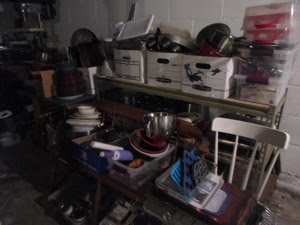 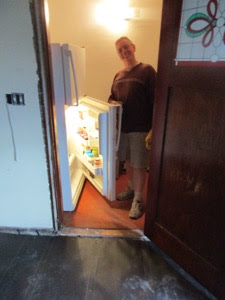 We're replacing all the appliances, but plan to keep the old refrigerator in the basement for things like holiday overflow and making birthday cakes.  (The new fridge will have the freezer on the bottom--which is nice now that everyone is tall enough to reach things and not have to bend down to use the fridge, but we need the easier access shelves in the old freezer for better carving and frosting of elaborate cakes.)  In the meantime the old fridge is living in the back hall just outside the basement door, so we still have access to eggs and milk, etc.


The rest of the food and dishware that we still use is all in the dining room on temporary shelves. 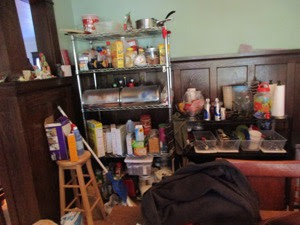 We're getting by okay with just the microwave and the toaster to heat things.  The kids have discovered Eggo waffles and figured out all kinds of recipes in mugs.  Aden even once made a good banana bread on her own in the microwave!

But the problem isn't cooking.  It's cleaning.  We grill when we can, and we are clever enough we could probably eat much like we normally do.  In fact, one of the kids said she missed spinach quiche, so Ian put one together and baked it in the oven in the studio at the violin store before the teacher back there arrived.  But no kitchen sink is a problem.  The two tiny bathroom sinks are not easy to wash anything in.  We bought plastic bowls after Quinn accidentally broke a ceramic one while washing it in the downstairs bathroom.  And we've already had one clog when too much food went down the drain at one point.  Plus we miss easier access to drinking water.  We try to keep water bottles filled up to carry around, but it's awkward.  When you're at home you want to just be able to pop into the kitchen for a glass of water if you're thirsty and it's odd to not be able to do that.

At least we're all out of the habit of starting to go in there when we need something.  For a couple of weeks anytime we needed a fork or a cup we kept walking into the kitchen only to feel silly.

Anyway, drywall is up, things are painted, cabinets are installed and just awaiting trim.  It's looking more like a kitchen again.  We have to wait at least a couple of weeks for the new counter tops, and there is still woodwork to do and a new window to install, etc.  We're looking at another month before it's finished.

Can't wait!  In the meantime the kids I occasionally stand in the new space and discuss what will go where when it's time to more things back in.  And we dream about what we will cook.
Posted by Korinthia at 8:57 AM