Beautiful Day for a Biopsy

Well, it was a beautiful day, anyway.  We've had a gorgeous week here, all in the upper-sixties/low-seventies.  I would have loved to have gone biking along the lake, or even spent a nice hour sitting outside, but I've had to be content with simply having my front door to the store open while I admire the sunshine from my workbench.  Quinn and I took a walk the other evening to pick up things at Target and marveled the whole way that we didn't need jackets.  I love a warm day in fall. 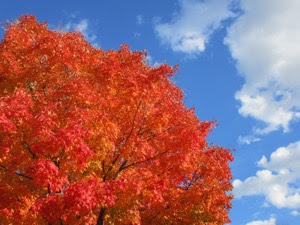 Anyway, I decided I really didn't have much choice other than to just do the next biopsy.  It makes sense to rule out cancer, and the whole thing has been going on too long not to try to find an explanation.  But I dreaded it.

It hurt.  I cried during the procedure because of the pain.  I cried at the mammogram afterward because... I'm not sure why.  I was feeling emotional I suppose.  I hate crying in public, but once you start it's hard to stop.

The system set up for calling and scheduling anything at this medical facility is a disaster, but I have no complaints about the actual people I dealt with once I was there.  They were all women, and everyone I met in the past remembered me.  They were all able to be friendly while understanding nobody wants to be there, which can't be easy.  Everyone was open to engaging me on whatever level I was comfortable.  They understood if I didn't want to talk and knew not to take it personally.  They anticipated certain needs and offered to assist when they could without making assumptions.  For instance, I had to hold my arm awkwardly over my head for a long time, and a nurse appeared with a rolled up blanket to prop under it which she asked first if I wanted.  Another nurse stood close enough to pat my hand and dab the tears off my face.

I did manage to make them laugh at one point when I told them my grandmother's story of surviving a tonsillectomy without anesthesia--that she called it the worst pain of her life but she got through it--so I really shouldn't complain because this was nothing by comparison.  The doctor said, "Well that's setting the bar very low!" and suggested their new hospital slogan could be "Better than a tonsillectomy without anesthetic!"

The irony is that injecting the numbing agent is what hurt so much.  There were a couple of core samples that ended up outside of the numbed area, and they hurt, but not as much as the anesthetic injections did.  The doctor explained that the whole area has been inflamed for so long and was so large that it was going to be tender no matter what.  I was supposed to keep ice in my bra on and off all day, but that got annoying so I threw out the first ice pack when it warmed up and was done with that.  Tylenol doesn't help me ever, and that was the only thing I was allowed to take, so I just spent the day being sore.

I treated myself to a really good sandwich on my way back to work.  After taking Quinn to Latin lessons after school we stopped at a grocery store and picked up the good chocolate chips because I wanted a cookie.  When I got home Ian was busy with a conference call and Aden and I walked the dog together.  Mona and Quinn started the cookie dough.

Then I just wanted to sit for a minute.  It was so nice outside.  I sat on the steps at the end of the front walk.  I thought about all the kids who had come by for Trick-or-Treat and asked if our headstone was real, tapping it in astonishment.  I thought about all the trips I'd taken back and forth across that street when we moved from the other house.  I tried to clear my mind and think about nothing, but that's hard to do.

Eventually Mona appeared, followed closely by Quinn to tell me the cookie dough was ready to bake.  My kids were all smiles, happy to have found me after searching the house without success.  Mona snuggled close on one side of me, Quinn on the other, arms all around me.  I told them that moment was the happiest I'd been all day.  I love my kids so much there aren't good enough words for it.

They sat with me until I was ready to come in.  We each made one big gooey cookie (pecans added to mine and Quinn's, none for Mona or allergic Aden) and put the rest of the dough to chill in the fridge.  We curled up in the family room and watched a couple more episodes of Gravity Falls which the kids have been carefully leading me through so I can be caught up to where they are.  There's nothing better than being cuddled up with my kids and laughing together.

Today I got the call from the hospital that it's not cancer.  I have "chronic granulomatous mastitis" and they haven't figured out yet what I should do about it.  They'll get back to me.  I'll be here all lumpy and sore when they do.

There are times when the right diagnosis from a doctor can seem like a miracle.  The moment medication kicks in and you start to feel better after suffering inside your own body for any extended period of time is like magic.  I'm glad certain things can be cured or alleviated thanks to other people's knowledge.

But as I've gotten older and dealt with hospitals from different vantage points, I'm also amazed by how often your health comes down to your own body knowing how to heal itself.  I'm glad to know I don't have cancer.  I didn't think I did, but it's still a relief to hear it.  But how much of what I have is something that has maybe been exacerbated by all of this invasive monitoring?  In the end if what I need to do is simply wait it out, was it worth all the time and expense and discomfort and pain?  I have no idea.

All I can do is be glad I'm as well as I am, hug my kids some more, and maybe have another cookie.
Posted by Korinthia at 4:01 PM