Lots of Noise, Lots of Bouncing, Lots of Quiet 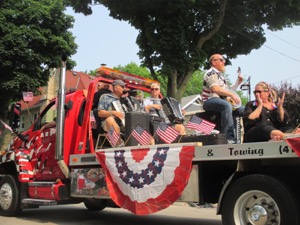 We went, as we do every year, to the parade in our nearby park.  Some things about it are always the same: Politicians throwing candy, antique cars blowing funny horns, the lazy band on the flatbed truck, Polish dancers, accordion players, baton twirlers, Elvis....  Missing this year were the racing sausages, and there seemed to be fewer dogs. 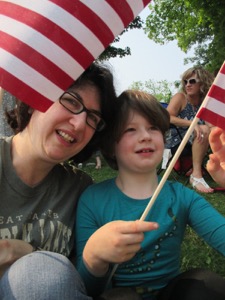 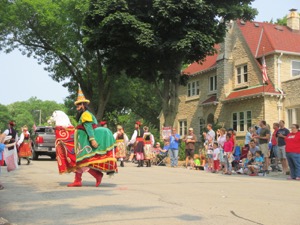 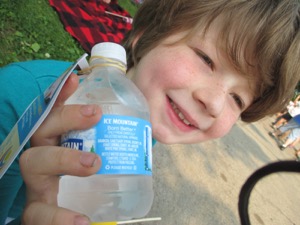 We've come to count on this one church that always hands out bottled water as they march by, and we were delighted to see Stick Guy in the lineup.  There is a guy in Bay View in a hat who does fancy tricks with devil sticks as he walks around town, and we are always happy when we spot Stick Guy out and about.  It's about time he was in the parade!  Although, it's possible he just wandered in there and no one minded.  We could probably do that too, really, if we waved flags and stuck a bow on the dog.  Who would know?  If it wouldn't completely mortify my kids I would consider trying it.

The main thing that is different is how easy it is to do things with my kids anymore.  As we walked to the park Ian and I were trying to describe to them what an ordeal that short trip used to be.  We needed to dress everyone, and make sure we had enough water and snacks, and usually a diaper bag.  There was a stroller, and sunscreen, and backup plans for if we had to separate for some reason (usually to find a bathroom).  Now we just...walk to the park.  The kids can take care of themselves.  If one of them wanted to go back home they could.  We don't have to know where they are every second.  It's lovely.

My kids have also outgrown most of the afternoon activities in the park, and that's just fine with us.  They were happy to go home after the parade and entertain themselves while Ian and I ran errands.  (That mostly consisted of going to the Apple Store with my work computer to try to upgrade it enough to last us another couple of years.  It's from 2007 and the DVD player built into it stopped working not long after we got it, and the guy at the genius bar suggested we just leave it be and use the idea of not having one as practice for the future when none of the new machines have them anyway.)  We had a cookout.  We cleaned the kids' rooms a bit while I was home to nag them about it.

The main thing the kids did at home was enjoy the new trampoline.  We got a 10 foot trampoline to fit on an octagonal portion of our deck in the backyard a few years ago, and that thing has been in constant use and is finally wearing out.  We moved it off the deck into the main yard to look into repairs, and discovered the kids actually liked it better there.  We decided since the kids are bigger and we don't really use the yard anyway that we should get a bigger trampoline.  We found one on sale online that was 15 feet, which didn't sound that much bigger, and it fills the yard! We scooted the smaller one over into the last bit of open yard, and now the kids call it the Penalty Trampoline.  And we may have an idea how to fix it, so we may leave it there.

Which means we have two trampolines.  TWO.  Who has two trampolines?  Well, we do, apparently.  Our whole yard is nothing but trampolines and the kids couldn't be happier.  It will actually work out well, I think, because any smaller kids in the neighborhood who want to join in the fun can bounce more safely on the littler one while the big kids do their wacky bouncing games on the bigger one, all at the same time, so no waiting.

Assembling the new trampoline was interesting.  Not only is it bigger, it's taller, which meant we had to stop at one point and cut down a tree branch that was going to be in the way.  (Because no project that looks like it will be simple is ever really simple.)  But it was up and going in time for the 4th of July and much bouncing was had by all.

The poor dog spent the whole day traumatized by firecrackers.  By the evening he simply wedged himself between Aden's bed and her nightstand and kind of went limp as if he'd given up on ever being happy again.  He's figured out stairs once more, though, so that's something.  He just doesn't want to leave the house anymore.

The biggest change in festivities this year was that we split up in the evening.  I took Mona and Quinn to the fireworks in the park, and Ian and Aden went to Summerfest.  For those not familiar with Milwaukee events, Summerfest is the largest music festival in the world.  (That's not hyperbole, that's according to Guinness.)  It's big, it's noisy, we can hear it the whole week all the way from the lakefront downtown.  We never go because it's mostly a lot of drinking and it's crowded and the couple times I've been were not enough to entice me back.

But Aden was given a pair of free tickets through a STEM group she belongs to, and a friend of hers invited her to go hear Weird Al perform on Saturday night.  I thought it might be fun for her and her dad to go together.  The show went until midnight, and I felt better about her being there with one of us.  It was her first rock concert!  Turns out Weird Al was Ian's first concert back when he was about 13.  How sweet is that?  They had a great time.

Today everyone, including the dog, headed off to Michigan for some time at the cottage.  I'm still at home because I have a mandolin orchestra concert to perform in this week.  It's so quiet!  It's been so odd to have literal explosions going on yesterday, and then total silence here today.  I'm using the time to clean while I can enjoy the fact that everything then stays clean after I walk away.  But I miss the dog at my heels.  And bugging the kids to practice.  And Quinn leaning on me while saying, "I love you, mom!"  And all the bouncing.

But life is good!  Hope it is for all of you, too.

Posted by Korinthia at 8:01 PM