Escape to the Cottage

We got a little time up at our cottage in Michigan right after 4th of July.  Ian, the kids, and the dog all headed out first, and I followed a few days later on the ferry because I had a concert to play, but it worked out well.  With everyone gone I was able to clean areas of the house and enjoy that they actually stayed clean when I walked away from them.  (Proof I am old that that made me so happy.)

It was wonderful to be at the cottage.  It's the one place where I don't feel obligated to really do anything most of the time, and I need that periodically.  It's a place to just kind of be. 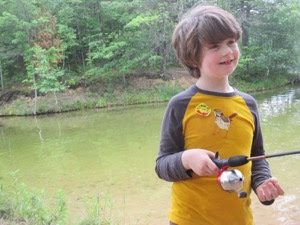 The kids slept in a giant tent set up in the living room as practice for their first ever camping trip coming up.  Quinn caught fish that we admired in a little tank before setting them free.  We saw wild turkeys and deer and osprey. 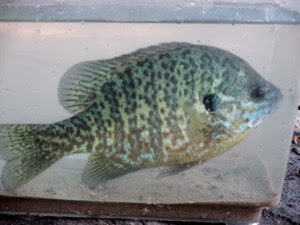 I got to read just to read.  We worked on a giant puzzle.

Aden and Quinn made friends at "the point" where we go swimming, and they splashed around happily for many hours.  They also learned the hard way why they need sunscreen.  (They've just reached the point of their sunburns peeling, which is a new experience for them.  I think they will take the responsibility of reapplying their sunscreen on their own more seriously from now on.)

After the day of getting sunburned we picked up DVDs at the library so we could just stay in.  (Thumbs up on Big Hero 6, The Penguins of Madagascar Movie, Tangled, and A Simple Twist of Fate.) 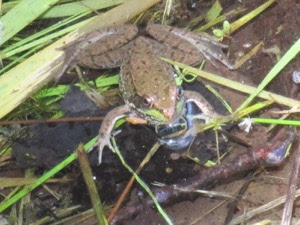 I asked Mona what she most wanted to do during our time at the cottage this trip, and she said she wanted me to teach her how to catch frogs.  The two of us went down together to the lake and I showed her how to sneak up on a frog and trap it in cupped hands.  She quickly caught her first frog. 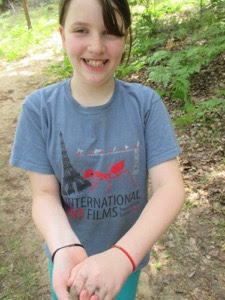 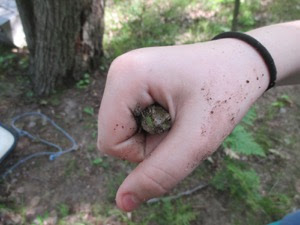 Mona loves the natural world.  She spends long stretches at the cottage on her own, exploring along the edges of the water and in the grass.  She's our best animal spotter.  On this trip she caught the smallest toad I've ever seen (the kids named it Poppy) and when she went to set that free she found a mole (which they called Star).  The mole was surprisingly soft.  I always imagined them to be sort of bristly, but it felt like a chinchilla. 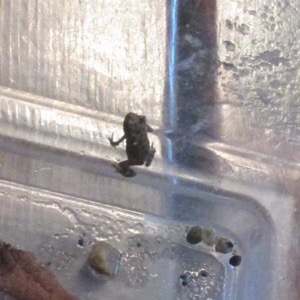 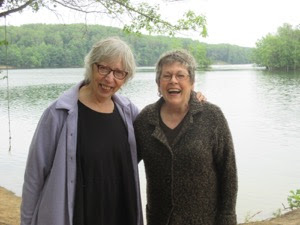 My mom and her friend Donella drove up to spend a day with us.  They used to come up together to visit with my grandma when she would spend a month at the cottage each summer.  I know grandma would have liked that that tradition continues. 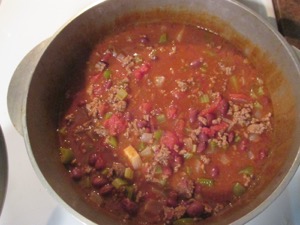 We used the opportunity to make a dinner in honor of my grandparents who built the cottage.  My grandpa only ever cooked a couple of things, and one of them was chili.  I'd never made his chili before.  It was simple and really good and we'll be making it again.  My grandpa would have been 100 this year.  It pains me that he never got to meet Ian or my children.  I think he would have been happy to know they at least got to try his chili.


For dessert we made a cake I remember grandma making for my brothers' birthday when we were small.  It's just angel food cake frosted with whipped cream mixed with crushed pineapple.  It's good, and it's amazing how certain things can take you right back to a different time.  Damn I miss my grandma. 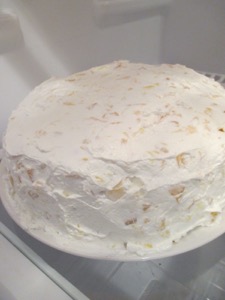 One of the things that's nice about coming to the cottage now that the kids are a little older is that we can let them go off and do things on their own more.  If they stick together they have permission to go almost anywhere up there.  There is a golf course (with a Castle by it) where they like to hunt for golf balls and bones.  We don't let Quinn go there by himself yet, but soon.  He likes hanging out with his sisters, and he still likes his parents' company, so he doesn't mind having someone accompany him to the sand traps and fields when the urge to hunt for interesting objects strikes him. 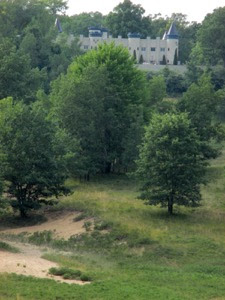 The plumbing was out the first few days of our trip.  We had to haul water up from the basement to use the toilets and wash the dishes, but the kids were fine about it.

The only real problem with our trip was it was too short.  I dream of being able to go up there for a straight month like my grandma used to.  It's hard to leave a place that peaceful.  It's hard to go back to having to care about what day and time it is.  Home is good, too.  But I like that we have a mild-mannered alter-ego home tucked somewhere in the woods to visit.