Normally as school approaches we get the kids back into some kind of bedtime routine.  Enacting bedtime forces other parts of our routine in line as well and gets us back into a more precise schedule.  That seems reasonable.  Apparently this year we were going for the unreasonable.

During summer vacation we have very few rules.  We don't tell the kids when to go to bed or get up, we get, um, flexible about mealtimes.  When I'm home and feeling ambitious I might remind them to practice violin or piano, but I'm of the belief that real unencumbered free time is valuable.  Left to their own devices my kids never get bored.  They do interesting projects and come up with interesting games, and I know how important freedom is to the creative process.  To have a big swath of unscheduled time to use as a blank canvas is a gift.  (One I wish I got for myself more often.)

So summers around here are loose when they can be.  It's nice to be able to do things for as long as you want and not care about the clock.  At the cottage the kids routinely went to bed well after we did.  Occasionally we'd bug them to be quieter, but we didn't actually want them to stop whatever odd thing it was they had laid out with foam swords and pillows and fake jewels.  There was lots of laughing involved in whatever that was, and I can't ask for more for my kids than a summer filled with laughter.


This summer I read the kids the entire Harry Potter series.  We stayed up some evenings until midnight reading because the kids did not want me to stop.  We started the series back in March, took a break from it while my niece was with us for almost a month, and just finished the last book right before school started.  So much fun to get to share that with them.  (Aden carved herself a wand at one point, and I've seen her say, "Accio cookie!" and watched Quinn run off to the kitchen and bring her one, so it was like it works.)

We collected Mold-A-Ramas, made s'mores, visited friends and family, enjoyed trips both planned and unexpected, swam, biked, flew kites, and the couple of things we didn't get to we may still try to sneak in before the snow returns.

But however great summer and its open schedule is, at some point it gives way to fall and the routine becomes strict in order to keep everything organized.  The first week of school went okay, but it's been an intense adjustment this year. 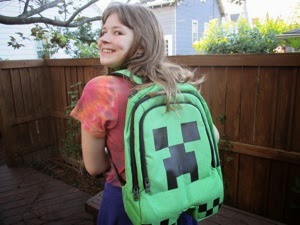 We picked up all the kids' school supplies a little late, but I think we got everything.  Our school seems to require a lot of copy paper and Kleenex and pencils from parents.  I managed to find Aden a Minecraft Creeper backpack that she's really happy about.  We did the annual clothing assessment, got rid of much, went out on a hunt for things we were missing....  I still need a winter coat and Aden and I both need boots, but I remain impressed how much stuff we're able to hand down to the younger kids to save us from shopping for everyone.

The only real preparation disaster was that Mona came to me in tears a week before school saying she needed help with a 37 page math homework packet I knew nothing about.  So that was hell.  But Mona's such a kid.  She's loud and silly and creative and moody and sometimes inappropriate, and she pulls dopey stunts like this that test my patience.  But dealing with Mona feels like I'm parenting.  Quinn and Aden are like living with somewhat lazy adults much of the time.  They're fairly reasonable and easy.  It's only sometimes with Mona that I feel like I'm asked to really flex my parenting muscles.  So there was lots of math and tears and frustration, but at least I am now clear on the "order of operations" and am not being tricked by those simple equations that stump people regularly on Facebook.  (I think Mona learned something, too.)

Anyway, I asked the kids if the week before school they wanted a gradual transition to an earlier bedtime so getting up early wouldn't be so hard, or if they wanted a horrible shock and just do it all at once.  They voted for the shock.  Which I kind of get.  Why nick into the last bit of summer fun?  It would be a big change no matter what.

But UGH.  That first week of school.  I am not a morning person and will never be a morning person.  I am a night person.  If I never saw another sunrise I'd be okay with that.  Write me a poem about it, but I don't want to bear witness.  It's painful for me when my alarm goes off at six so I can get the kids fed and out the door in time for school at 7:35.
So how did they do with the "shocking" start?  Okay the first day.  They got up when I asked and got themselves organized enough that we were on time.  The first day isn't really the problem.  It's the second day.  Sort of like all that build up for girls about starting their periods, and then it happens, and then it sinks in that, oh, wait, this just keeps on happening now and you just deal with it for essentially forever.  Huh.

So the second day I wanted to bike to school.  But we were running late.  And I decided that on a beautiful day I was going to let exercise trump being on time.  We ended up way later than I imagined, because Aden was poky and Quinn was a mess.  I got the girls to the school okay, but Ian reported that Quinn had a meltdown in the park and then fell off his bike he was moving so slowly.  He was just so tired and cranky, and I suspect he could also live happily without ever seeing a sunrise.

Then later that morning I got a call from the school that Aden was ill (pain behind her eye, pale, shaky), and we ended up taking her to Children's where they declared she'd had a migraine.  So that was exciting.  She's fine now.  Aside from all the adjustments to seventh grade (which are enough to give anyone a migraine.)

Anyway, the real fun starts this coming week when we add into the schedule piano lessons and youth symphony and evening swim team.  Between all of that and my rehearsals and work and teacher meetings and Army weekends and guests coming to town, the whole calendar is looking unpleasantly crowded at the moment.  I look sadly at my unedited second novel on my laptop and wonder when I can carve out the time to get it done one day.  I'm thinking next summer.
Posted by Korinthia at 11:21 AM