This is okay for two reasons:  First, for all those people who somehow think I can do anything it's nice to show I can't, and second, disaster tales are way more fun to tell than success stories.  So come see how badly cake making can go!

Aden wanted a Minecraft themed cake, and she decided she wanted it to look like a crafting table from the game.  I didn't know what that was, but found this (unfolded) image online: 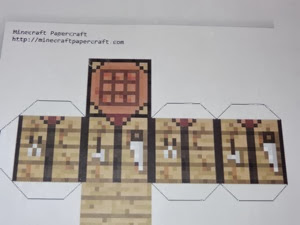 Essentially it's just a cube with pixelated images laid out in a 16 X 16 grid on each side.  As far as cake shapes go, a cube didn't sound bad.  But our first mistake was deciding how big to make each side.  Ten inches sounded like a simple number.  (Heh.  Lesson one: Smaller is better.  Smaller may have worked.  In retrospect, eight inches tops would have been the way to go.)

My plan was to make a cube of layer cake, frost it, and stick pages of sugar paper on that I'd paint appropriately with food coloring.  Sounded time-consuming, but doable.  But then the store did not have enough sugar paper.


Plan B: Use fondant!  It can be rolled into sheets and should stick to frosting, so no big deal.  I made a double batch of fondant before work, and in the evening I rolled it out and cut it into five, ten-inch squares using a grid Ian made me to use as a guide.  (Lesson two: Large sheets of fondant do not "stick" to the sides of anything.  You can drape fondant, but otherwise gravity is not its friend.) 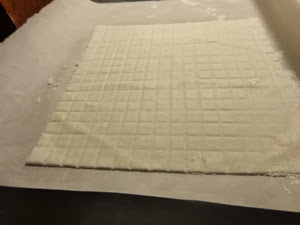 Ian helped me roll out the fondant, get each piece onto its own cookie sheet, and press in the grid.  Then he sensibly went to bed.  I stayed up until one in the morning painting my five sheets of fondant with food coloring and then stacking them in the freezer (using Legos to keep them from touching).  Behold my nice work before it all fell to ruin! 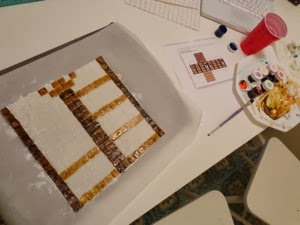 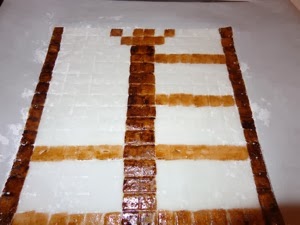 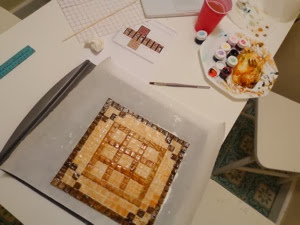 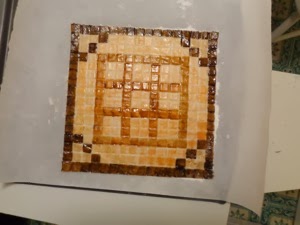 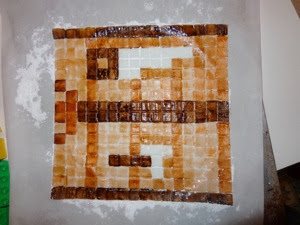 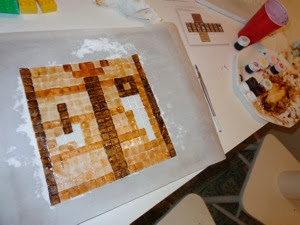 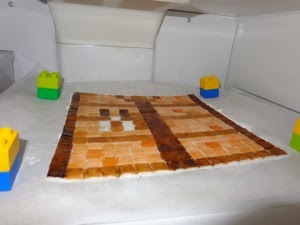 I like projects like this, actually.  I enjoy a lot of work that looks tedious to others, and I watched Bob's Burgers and Battlestar Galactica as I painted and the dog sat at my feet hoping food would fall and life was good.

I had Aden check out all the fondant sheets before she went to school the next morning and she loved them.  She was excited to see them all assembled in the final cake form.

Friday I only have store hours by appointment, so I had most of the day to tackle the cake.  But then I realized I didn't have any baking pans that were ten inches wide, and I ended up getting some jellyroll pans from Target that were ten and a half by something huge.  (Lesson three: Avoid projects on a deadline that require new bake ware.)

One of Aden's guests was a vegan, so I asked her mom for a cake recipe her daughter could eat.  She obliged me with one which is very tasty.  I made the glaze for it, too, to use as the frosting between layers, but then learned (too late) that some margarine contains buttermilk.  (Seriously?  Then what is the point of margarine!?!?  It never occurred to me to read the label on the margarine.  Poor girl asked me the next morning at breakfast if the box of Land-O-Lakes margarine she found in the fridge was what I used in the frosting, and she looked a tad stricken as she showed me the milk content on the label.  Ugh.  So much for my good intentions.  I was also too late in telling my sister-in-law who doesn't eat any animals that my dip at Thanksgiving contained shrimp, so I'm batting a thousand in helping guests violate their personal food codes.  Whee!)

The vegan cake was delicious, but it's not very, um, structurally sound.  At least not stacked to almost a foot high.  And I had to make a lot of it. (Again, ten inches square doesn't look like much.  Ten inches cubed, well....)  I started with a quadruple batch and that filled both my jellyroll pans.  Then I made another quadruple batch.  Then the kids were finally home from school and I had a lesson to teach so I put Aden in charge of making yet another quadruple batch (which apparently didn't work out when she baked it since she didn't realize there was a difference between parchment paper and wax paper), and then she made one more quadruple batch, which officially ran us out of cocoa powder and had to be declared the final batch.  That's a lot of cake. 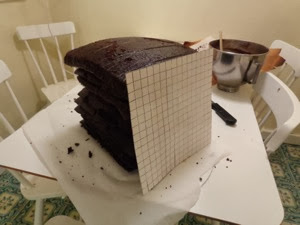 So.  Next.  I had to fill in the massive gaps and inconsistencies between the layers.  Since I was using lots of thin layers using the jellyroll pans instead of just a few normally thick layers there was lots of patching to do that I wasn't expecting.  I read the labels on the store bought cans of frosting we had in the house and discovered they met vegan standards, and decided to use them as cake spackle.  But I used up two cans on just one side of the cake.  Quinn and I ran out to the store and picked up many many more cans.

I set to work frosting.  It didn't go well.  And then the avalanche happened.  I tried to bolster the worst of it up with the batter bowl while I was debating my options, but that didn't work. 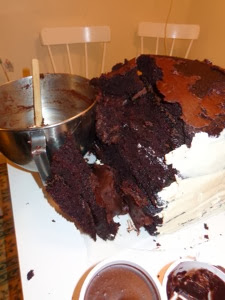 Neat.  I briefly rebuilt while I was still in denial about the cake-quake and made Ian hold the broken pieces in place while I frosted a different area.  But then the frosting started to melt against his hand and he looked at me hopelessly as it all began to slump and ooze despite his best efforts.  (That man would have found a way to stand with his hand on that cake right up until party time if I'd asked him, though.  I don't know what I did to deserve him.)

I couldn't give up!  There had to be a way to fix it without baking more cake!  I made a brief attempt at shoring up a corner with a chunk of leftover fondant, but that made things worse.  So I made a batch of rice crispy treats and sculpted a new section of the cube out of that.  (Not exactly vegan, but I figured there was PLENTY of vegan cake elsewhere in the cube.  Except for my stupid margarine it turns out.  And the fondant has a tablespoon of gelatin in it.  I suck.  Anyway....) 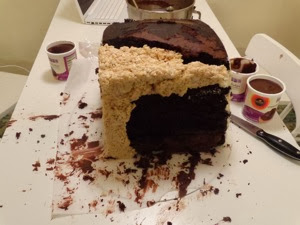 So I rebuilt.  And I frosted. 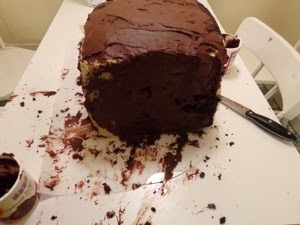 At this point it was looking more like a crime scene than a birthday treat.  But the fondant!  It would hide all sins!  It was going to be beautiful!

Aden's party had two parts.  A whole bunch of kids were going to meet to roller skate at Incrediroll in the afternoon, and then a smaller group was going to come home with us and have a sleepover.  It made the most sense to take the cake to the where the large group of kids was going to be.  But I was going to be at work and there was no way Ian could drive people to Incrediroll and somehow manage a giant cake.  (Lesson four: Um, THINK, really.  Thinking is always a good lesson.)

I told Aden the new plan was I would assemble the Minecraft cake, we would admire it, she could gaze upon it and be happy, and then we would lop off the top half (or third) to put on a platter to transport it to the party.  She wanted to know if we could take both parts and we could reassemble it at Incrediroll, but I told her once we sliced into the fondant that wasn't really going to work.  (I had that much right, anyway.)  Aden was disappointed, but understood.  She was trying to still look appreciative of my efforts despite the change of plan.

So then I attempted to put the fondant on the cake.  And discovered that my cake was STILL TOO SHORT.  (Because, really, my problem with the whole endeavor was I should have baked more cake.)  I had to slice three pixel rows off the bottom of each of the four side pieces.  Then, as the sheets started to quickly warm up, the fondant all began to buckle and tear and slump and fall...

But for about thirty seconds the cake looked sort of like what I had been aiming for for two days. 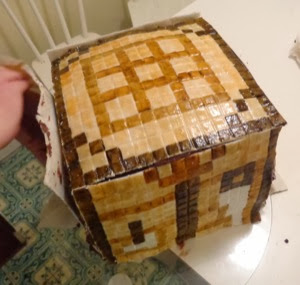 And then it was over.

I cut off the top chunk of cake and dumped it into a glass pan.  I salvaged bits and pieces of the mangled sides and stuck them around the edges. 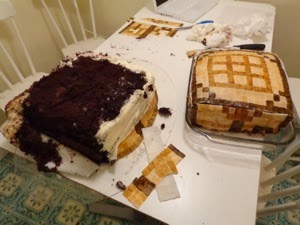 Oh well.  It was kind of a Minecraft crafting table cake.  And it was kind of vegan.  It was definitely time consuming.  And messy.  So there's that. 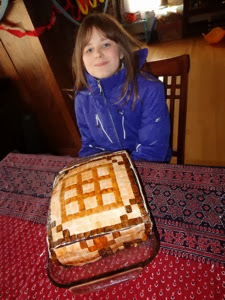 Aden ended up happy with it.  She posed with it briefly for me before heading out for her last Home Depot project.  (That free program is for kids 11 and under, so starting next month she will no longer be eligible.)  The cake made it safely to Incrediroll where all the kids ate it and liked it.  That's all a cake really needs to do, so it wasn't a complete failure.  Just a failure of my artistic vision and construction abilities, but at least I learned a lot and know what to do differently in the future.

Speaking of things failing and falling, on that trip to the store with Quinn?  We were running in the parking lot because it was COLD out, and normally I would slow him down and not really run myself because I don't run, but I had this insane happy thought of "I'm running!  Maybe running is good!" when we fell.  Just, splat onto the pavement.  (Lesson five: Don't run!)  I banged my elbow and a knee and somehow skinned the palm of one hand and the back of my wrist on the other.  Quinn looked unhappy, but popped back up and didn't think about it again.  Me?  Well, I'm old.  It's amazing how traumatic a simple fall is when you are old.  My skinned palm still stings like mad, and for a full day I was feeling all kinds of bent and damaged.

In the meantime, we still have plenty of cake.  And it's mostly vegan if that matters to anyone.  So if you're nearby and feeling hungry please help yourself!  We have more leftovers than people generally start with for actual cake.

(And Lesson six: Remember to laugh.  That which does not kill you makes a great story later.  It's just a cake.  And hours of my life I don't get back, but my kids love me and love that I try and at least my mistakes are tasty.)