I love my Mona.  She's an interesting little artist, that girl. 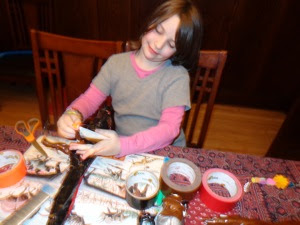 Mona's recently started using wire on the interior of her paper creations.  I discovered her unwittingly destroying a perfectly good pair of scissors while cutting lengths of some floral wire she came across, so I gave her some needle nose pliers with a wire cutter to better do the job.  She now starts her creations with a wire skeleton of sorts, then molds paper around that, then completes it with a skin of colored duct tape. 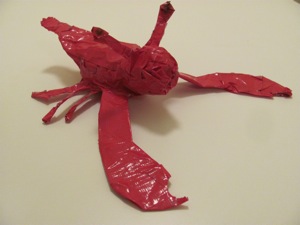 Unfortunately, my photographs don't do her work justice.  When you can hold them in your hands and turn them they are really remarkable.  In pictures they just look sort of distorted and flat, but at least you can get an idea of what her work is like.  She just dashes these things off like it's nothing.  I wish I could salvage more of them to save for posterity, but she makes them to be used as toys and they end up getting pretty battered.  I still regret not saving her lobster from a couple of years ago because all I have of it now are the pictures.  This photo is from two years ago when she just started working in duct tape, but is that not an impressive lobster for a seven-year-old?

Anyway, lately Mona's been into dinosaurs and birds.  Here is her recent collection dinosaurs: 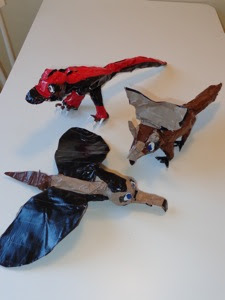 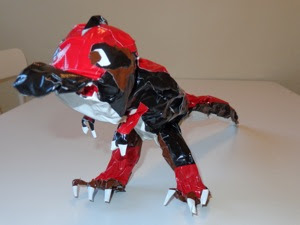 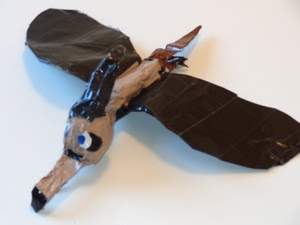 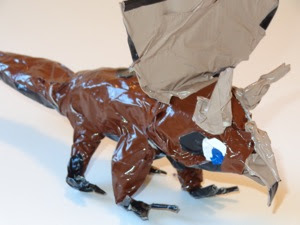 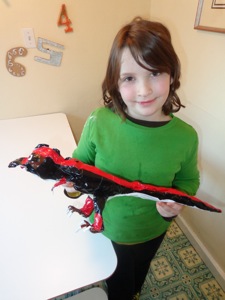 And here are some of her birds.  I find these particularly interesting because she pays such close attention to details, like the shape of the beak.  These first two are an osprey and an red-tailed hawk that she made for a couple of friends, so I asked the kids if I could take pictures of them before they took them out of the house. 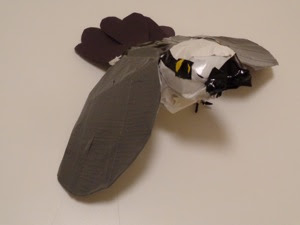 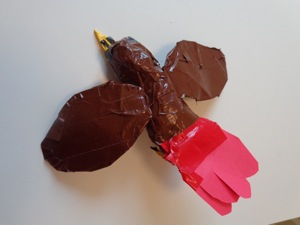 Then for herself she made a bald eagle: 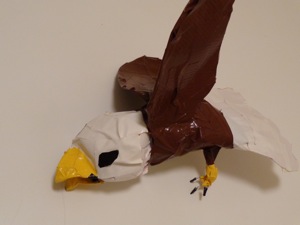 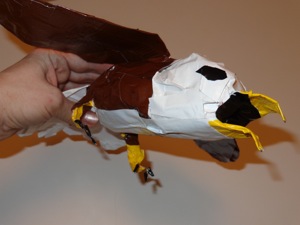 And then my favorite (and the one I would snatch from her if I could to keep for myself) is a falcon.  She made it so its wings fold back correctly when it dives, and she used her zebra striped duct tape on the belly because it was the best match for the pattern in the feathers on that part of the bird. 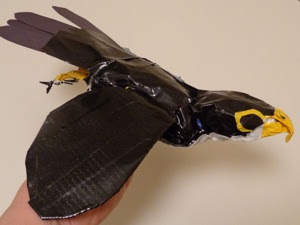 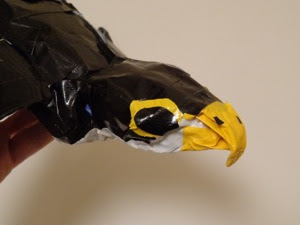 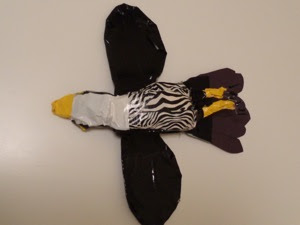 We once asked Mona's teacher at a conference how she did socially in the class, and he replied, "Mona is much beloved."  Apparently anyone who needs a prop for a presentation can simply announce what they need and she says, "I'm on it!" and produces something both beautiful and accurate for them to use.  I'm glad she's in a school that lets her lead with her interests.  She decides what animal she's inspired to make, and then builds her whole presentation project around it, doing her research and writing up reports, etc.  Her latest project is on raptors, which is why she built the falcon.

Can you imagine someday if we teach her to weld?
Posted by Korinthia at 11:07 PM