We had guests in our house from Christmas Eve to the day after New Year's.  It was great.

It's been quiet here during the past few holiday seasons since we moved into our new house, but this was the first year on this side of the street where Christmas felt like it should.  The table was set for 16 for my brother's birthday dinner and my mom cooked up a storm.  Children decked out in butterfly wings pranced about the house, people laughed and talked and shared stories, we played a little music, and cranked up the record player and danced to the light of the mirror ball in living room at every opportunity.  It just doesn't get much better than that. 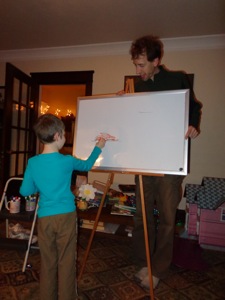 I'll get to that in a moment, but first you have to see something funny.  In the last few hours of 2012 we played our own family version of Pictionary with my parents, brother, and his fiancee.  We were in two teams, and each team wrote up a list of clues for the other team to draw, so we can personalize the game to our family.  It's always fun, and I laughed until I cried.

(Here's my brother holding the white board still as Quinn draws a pretty good plate of spaghetti.)

Anyway, this, (by an artist who shall remain nameless unless I get permission otherwise), was the drawing during the game that was supposed to represent my Aunt Charlotte. 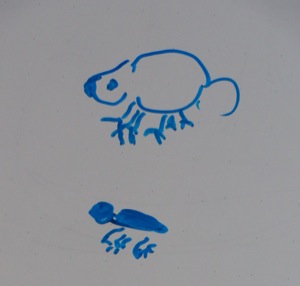 This is my actual Aunt Charlotte who happens to be a family court judge in Ohio. 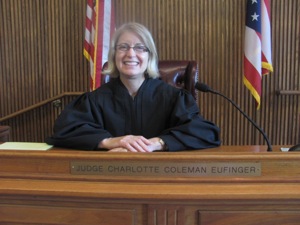 I know, the resemblance is uncanny, right?

And this is Senator Al Franken.

We stopped the game long enough to watch the ball drop in Times Square at midnight, we shouted and hugged and kissed, and then several people headed off to bed and tried to sleep while the rest of us turned on the mirror ball and danced.  I got to choose the music and went with an eclectic mix from our record collection, including Duran Duran, Peter Gabriel, A-Ha, the B-52s, and even a couple of truly weird tunes off the Popeye movie soundtrack.  Mona invented an adorable little crab dance that Quinn quickly adopted.  The dogs watched on, hopeful that we would come to our senses and just go to sleep already.  Which eventually we did.  But it was a great start to 2013.

I read on a few different blogs that a Connecticut PTSA was looking for donations of home cut paper snowflakes to decorate the new school for the Sandy Hook children.  So we all sat down after dinner and folded and clipped and cut.  My dad insists he'd never cut a snowflake before.  My soon-to-be-sister-in-law made some beauties.  Aden worked carefully on a few intricate things, and Mona and Quinn cranked out a blizzard. 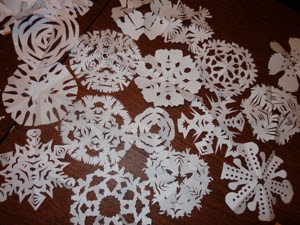 Not a day goes by that I don't think about those children getting gunned down in their school and wondering how their families are coping.  I am beyond thankful that my family was with me this holiday season, and the tragedy in Sandy Hook highlighted for me what it means to be able to be with the people you love.

I don't know if anyone will actually use our snowflakes, but they were made by my family with love in the hope that they might make someone smile.  Paper snowflakes aren't much to offer, but it was something.  And some days that's the best we can do.  Something.