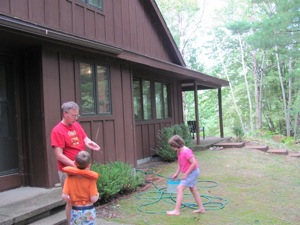 We just spent the last two weeks at the cottage.  It's still hard not to write "my grandma's cottage," but I'm getting closer to being able to say "our cottage."  It's finally starting to sink in after owning it for a year that it belongs to us now.

We signed the paperwork last summer on my grandmother's birthday, more than half a year after her death.  I think she probably pictured her summer cottage in the woods being shared by her children for a time rather than moving so soon into the hands of one of her grandchildren, but I think she'd just be pleased that it's stayed in the family.

When we are in Milwaukee living our busy lives and we get the bills from Michigan to maintain another house there, one with taxes and fees and things to fix, I wonder if it's worth the expense.  But when I'm there I know it is.  It's a home of my childhood that doesn't change.  When I'm at the cottage it's like being with my grandma again.  Like being with the family I grew up with while getting to share that with the family I have now.  It's magic.

The fun in owning the cottage rather than just visiting it is that we're free to do with it what we like.We can update, rearrange, and add without asking permission.  There is a big utility closet on the main floor that neither my mom or I ever liked how grandma had it set up.  We enjoyed a whole morning of cleaning it out, pondering some of the odd things in it, creating a pile for donation, and putting it back together in a way that makes more sense for how we will use that space.

As we identify things in the cottage that Ian's allergic to I get rid of them.  We thought for years Ian had a problem with the couch itself, but turns out the throw pillows on it were full of feathers, so we threw them out and got new ones and now he can sit there just fine.  Also turns out the vacuum cleaner has been hopelessly clogged for years and wasn't cleaning anything.  Ian fixed it and now that it works and we've sucked up lots of ancient dust he's having less problem with the carpet as well.


One of my favorite parts of being at the cottage is playing games.  There just never seems to be enough time for that at home.  I relearned Cribbage and played many rounds of that with my mom.  Dad and I played Scrabble, although that particular set needs to be washed.  (Who knew Scrabble tiles could get moldy?)  We taught my sister-in-law and niece Spite and Malice which is the family card game.  Spite and Malice requires several decks of cards, and my mom and I found a little yellow tin that gram used to store onions in that is a perfect box for holding that giant deck.  Grandma's eyesight was getting pretty bad the last few years we were able to play cards together, so several of the decks mixed in are of the large print variety which my kids found either annoying or hilarious depending on their mood.

Turns out Quinn is quite the card player and won most of the Spite and Malice rounds.  (My sweet boy actually got a bit obsessed, and one night when he was supposed to be in bed he appeared at my side just as mom and I were starting a Cribbage game, and he said to me, "I thought I heard shuffling."  I let him sit in my lap and cut the deck for the starter card each hand.)  This was the summer the kids learned Parcheesi and Backgammon.  They've always loved Uno.

We had a few rainy days toward the end of our trip, so we went out and bought some new board games to add to the closet.  We got Apples to Apples Jr which was a lot of fun, a pigeon themed concentration deck, and something called Dicecapades which has 100 dice of many types which is a perfect game to leave at the cottage.

Other highlights of our vacation included playing badminton on the beach with all the rackets and birdies at once,
lots of time in the water, 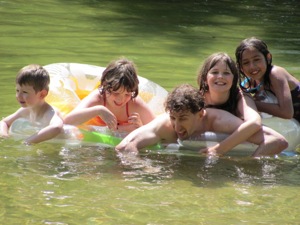 the younger kids all catching their first fish, 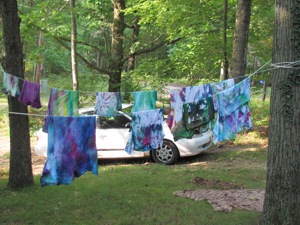 and with my family there is always drawing. 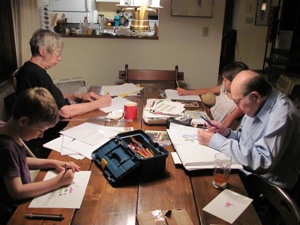 I couldn't have asked for a better vacation.  I even got to read.  I never get to read.  I finished Eden Lake by Jane Roper, The Family Fang by Kevin Wilson, and State of Wonder by Ann Patchett (all of which I enjoyed, and the Patchett book was particularly hard to put down).

I took a vacation from my diet as well, which was necessary to enjoy things like peach kuchen made by my mom and Aden from my great-grandmother's recipe: 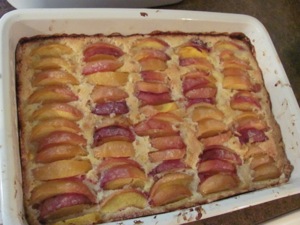 I paid for it in headaches later but it was worth it.

The cottage has always been a happy place for me.  It's a family place, built on good memories and the promise of good memories to come.  When my grandmother was in the depths of her dementia in her last year, it was the cottage that her mind often retreated to.  We would be having a conversation in the nursing home, and the next thing I knew gram would be telling me in the present tense how nice it was to be back in Michigan up in the woods.

Mom told me while we were cleaning out the utility room that the cottage was the one thing grandma worried about for after she was gone.  She wanted the summer home that she and my grandfather built together to continue to be a place where her family gathered and enjoyed themselves.  She wanted it to live on as the place she loved.  She would have been pleased knowing that we were all there having fun the past couple of weeks.

So as we laugh and shuffle cards and make do with thirty year old badminton rackets bought on sale at Sears, our vacation becomes more than those things.  It becomes a living tribute to all my grandmother meant and gave to us.  And that's a summer to remember.