We've been biking to school as a family whenever we can the past few weeks.

The upper elementary kids had a series of bike safety classes in May and Aden was inspired.  In mid-May there was a (school-wide? city-wide? national?) bike to school day.  Of course on that morning it rained, but we gave it a shot the day after.

I love activities we can do as an entire family, but it can be complicated when you have kids of different ages.  There aren't a lot of games or physical events that work easily for both the ten year old and the five year old.  I didn't really think biking would be among them for some time.

Mona was resistant to the idea of learning to ride a bike (preferring her scooter) until recently.  But she got a new hand-me-down bike from a friend that she was excited about, and Mona, being Mona, didn't want any help and taught herself to ride that bike over the course of a couple of hours and a few nasty spills that we were expected to ignore.  Now she bikes fearlessly as only Mona can.

Quinn learned to ride a scooter this Spring.  His tricycle is too small and he needed something to ride, and I was nervous about him having a scooter with only two wheels, but of course he wants what his sisters have.  Now he zips around the block, gracefully when he's well rested, tumbling and ripping holes in the knees of his pants when he isn't. 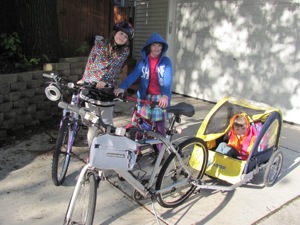 So all my kids have wheels, but mixing bikes and scooters doesn't work well if we want to stick together.  Aden was determined to get us all biking to school, however, and she reminded me we had a bike trailer in the basement.  I had thought of it as more of a toddler hauling accessory, but we pulled it out and had Quinn get inside, and he liked it.  He sings back there, and keeps treasures in the side pockets.

The distance to the school is just over a mile and a half, and there are a few busy streets and intersections along the way.  We picked a simple route where we could primarily use sidewalks and did a practice run in the evening to time ourselves.  It takes our odd little convoy about 25 minutes from door to door.  (Alone, Ian or I can do it in a bit less than ten.)

The first morning we biked to school Ian had Army responsibilities, so I had to take the kids alone.  Hauling the trailer uphill with Quinn is hard, and I was a little frazzled trying to give directions and keep everyone in a little group while monitoring all the morning traffic.  I had Aden lead, and I stayed in the rear listening to Mona chatting away.  I prefer when Ian joins us and can haul the trailer, but I'm pleased with myself for managing to get all the kids to school on time with the bikes on my own.  Since that first morning we've gotten better at it.  The kids are familiar with the route now, and their biking skills have improved.  (Although there was a day last week right after a rainstorm that resulted in a lot of sticks on the ground, and I swear to you Mona hit every last one.  I considered asking her if she really was trying to hit them all but then I decided I didn't want to know.)

It takes extra planning and work to get ourselves out the door in time to make it to school before the last bell, and we can't bike in bad weather, but I'm glad we've gone as often as we have without the car.  With the half-day pickup that's six trips between our house and the school every day.

We had been at it about a week, some days proving more conducive to biking than others, when I came across a PBS program one night that caught my attention.  I watch a lot of TV, but not on our actual television, and one evening when I got home late from work and made myself a little something for dinner I decided to eat it alone in the family room and just flip around with the remote awhile for fun.  I stopped on a program about families dealing with childhood obesity and what people can do to change, and most of it was stuff I knew (like not eating alone in front of the TV) but the one line that jumped out at me was a doctor saying that many people have the mistaken idea that a healthy lifestyle doesn't take work.  He said that families who are able to do a successful job of eating the right foods and being active are exceptionally organized.  They plan, they make sacrifices, and they make it a priority even though it's difficult.

You know what?  That really made an impression on me.  Because I think I did have a sense that maybe there was something wrong with me that trying to incorporate more of the activities and choices into our daily lives that seem healthier were also an incredible amount of work.  That maybe I wasn't cut out for it somehow.  Cooking decent meals takes planning so produce doesn't go bad and some days our schedule is really tight.  Getting around with the kids by bike takes a lot more thought and effort, and some days we can do it and some days we just can't.  Having someone not just say, "This is good for you and your kids, you should do it," but add, "It's going to be a lot of hard work but it's worth it," makes a difference.  It changes your expectations.  I don't feel like I'm a failure if I can't do it all the time.

So I'm proud of us for making the effort, even though it's not easy, and the truth is when it all goes according to plan it's great.  As the school year winds down for us in another week I will miss getting the kids there by bike.  It's been lovely, really, despite middle-schoolers letting the air out of the girls' tires on the playground one day, or the occasional squabble about who leads and who follows, or stopping to fuss with a bike chain.  I think it's been good for our kids to see us solving problems as they arise and sticking with it.

There's a level of independence that comes with being on a bike that's also positive.  Aden even got to bike home alone one afternoon when she stayed late to play with a friend on the school grounds.  She was confident enough about remembering the route back that when she called to say she was ready to head home she said she wanted to do it on her own.  I won't lie that it didn't make me nervous because some of places she'd have to deal with traffic scare me, but I'm proud of her for doing it.  She did fine.

My favorite part of our commute is where we cut through the park, and in the middle there is a large pond that at this time of year is teeming with red-winged blackbirds singing in the reeds every morning.  It's beautiful.  And worth the extra work it takes to get us there.

We'll have to find new destinations to bike to as a family once school is out, because now that we've gotten into the groove of it I don't want to give it up.  It is worth the effort.  And my kids agree that the world looks better when viewed from a bike.

Posted by Korinthia at 9:43 AM