Years ago, back when the idea of Ian getting deployed to a war zone was only an abstract concept, I had it in mind that a good way to deal with such a situation would be to travel.  If Ian were going to be gone for a year or more, maybe it would nice to take the kids to live for a few weeks at a time with or near different friends or relatives.  Give my kids a chance to see what it was like to live in my old neighborhood with my parents for a month, or learn from my brothers wherever they happened to be at the time, or explore a new city where old friends could show us around.

I liked the idea of a distraction wrapped inside an adventure disguised as a learning opportunity.  Making memories, seeing the world, too busy to be terrified that my husband might never come home.  There was not a day Ian was in Iraq that I didn't live in fear of soldiers coming to my door with unthinkable news.  If I wasn't home those soldiers couldn't find me, and somehow we'd be spared.  If there was a better excuse to travel I couldn't imagine one.

Well, being two months pregnant with our third child when Ian got called up initially pretty much destroyed the idea of uprooting ourselves for any significant length of time.  Between doctor's appointments and Aden starting at a new school and all the challenges Mona threw at me during her preschool years, the more routine in one spot the better.  (I did fly on my own with all three kids when Quinn was only five months old to New York City and back, which taught me I can handle more than I ever thought I was capable, but that's its own crazy story within a story.)  The nomad plan was out, the entrenched in the house plan was in.

But there is something about just being Elsewhere.  Most of the time home is easiest.  Except when it isn't.

When not on active duty Ian usually has at least two weeks away in the summer to do Army things.  He's been as far away as South Korea for training, and as close as Ft McCoy here in Wisconsin.  But no matter where he goes, when he's gone life at home becomes a gymnastics event of scheduling for me.  A gig suddenly involves finding a sitter (and for a long time that sitter had to be able to get herself home without my help which decreased the available pool of candidates).  Being with my kids means arranging to have someone cover me at work.  Work means either fighting with the distraction of my kids or waiting until they fall asleep and staying up very late to get anything accomplished.  Everything takes more planning and work when there is no one to split the responsibilities and chores with and I don't sleep well when Ian is away.

I can deal fine anymore with a short stint of single parenting, but it's awkward.  I'm surrounded by the things I should be getting done, but I can't reach them.  Normal life looks like an obstacle course and the frustration can get demoralizing.

So generally what we do is go Elsewhere.  This time Elsewhere meant Ohio.  My cousin's daughter just turned two and I hadn't seen their new house, and there were other relatives and friends I missed.  I made a few suggestions for places we could visit, but when I left the final decision to my kids they wanted to go to Ohio.  Road trip!

This is only a real option because my kids are great on the road.  I don't know why they are so good on all day car trips, but I'm thankful they are.  We even forgot the right cord for their portable DVD player and they couldn't watch movies like they had planned to, but they were fine.  They shared snacks, sang little songs, and somehow kept themselves amused for eight hours across four states.  (My brothers and I were never nearly as good.  There was a lot of car sickness as well as accusations of people looking at one another, none of which made for fun road trips.) 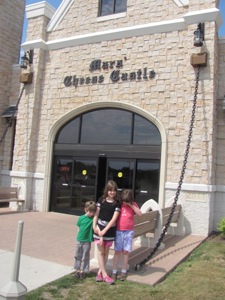 The theme for this vacation was that it was entirely optional.  I told the kids if after the first hour in the car they wanted to go home, we would go home.  There were no plans that had to happen.  So with no pressure about when to arrive anyplace, we stopped at the Mars' Cheese Castle on the way out of Wisconsin.  We drive by it all the time and have never been.  This time we did.  We bought cheese.

Once in Ohio we stayed with a friend and her family, which works out well for several reasons, not the least of which is that we can take over their entire basement with its playroom, bedroom and bathroom and not feel like we're completely in the way.  They also live very close to where my grandmother did, and I like being in the area again, although I can't bring myself to drive by her house.  (I made that mistake a couple of years ago and it was too painful to be on the outside of a place that used to feel like home and is now off limits.)

We visited COSI (the science center) with my friend and her boys, walked around Antrim Park Lake with my mom who drove down from Detroit just to see us for the day, bought books from the Village Bookshop, and hung out with our relatives in Marysville.  I have really fond memories of Marysville because not only has it been the source of many wonderful family gatherings at my uncle's home, but I lived there the summer between my freshman and sophomore years at OSU.  In some ways the town has changed dramatically, and in other ways it never changes at all.


The most unusual bit of fun we had would have to be our visit to the courthouse in Marysville.  My aunt is a judge there, and she let each of my kids try on her robe and sit at her bench.  They all loved banging the gavel, and each got a chance to be cross examined in the witness box by my cousin the lawyer which was incredibly funny.  But the person with the best judge look (aside from my aunt the actual judge) was Mona: 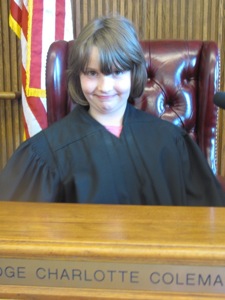 There is probably more to write about our trip, but I'm tired after the long drive home.  Suffice it to say we had a wonderful time.  My kids wept in the car after we hugged everyone goodbye and they told me they didn't want to leave Ohio.  I told them I would miss everyone too, but we needed to head home.  Besides, we had a dog (being watched by our neighbor) who probably missed us.  That convinced them to get back on the road to Wisconsin.

They do love their dog.


And they do love to be home.  So do I.  That's the best part about Elsewhere.  It turns coming home from routine to bliss.