The Science of Praise

My kids had their annual science fair at school last week.  It's always crowded and busy and there is always a bake sale where we can buy a couple of cupcakes for the price it would cost me to make an entire batch of them better at home (but we buy some anyway because it raises money for some worthy cause plus apparently it's exciting to buy a treat at school). 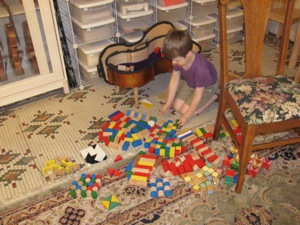 Anyway, Quinn's kindergarten class all did planets, but since he's still only a K4 and not in school the whole day yet he was not part of creating any displays for the science fair.  He pointed out what the K5s did and he's looking forward to making something great next year.  Considering how organized he is with the blocks at the violin store I can only imagine what he'll do when he's given real work to display.

(He actually organized all the blocks into categories and then made a chart, so he's a serious kind of five year old.) 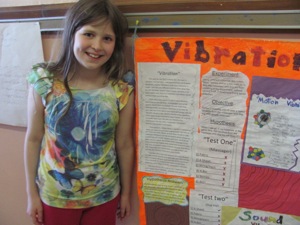 Aden's class had some entertaining displays, including one about the science behind why dropping a mentos into diet coke creates a geyser, and another that made soap bubbles filled with fog from dry ice that you could hold if you were wearing gloves.  Aden did a project on her own about vibration and I was really proud of her.  She created a nice poster and had lots of props for doing demonstrations including a slinky for simulating echos and her violin for making musical sounds.  I was impressed with how well she engaged people who came by her display and how clearly she explained her work.

And then there's Mona.  Aden can move me to tears and Quinn leaves me astonished, but Mona makes me laugh every day.  I love Mona.

I love all my kids, but Mona has a particularly lively role in our family.  In fact, when we split up for the first couple of days of spring break recently and I had just Aden and Quinn with me, it was sort of eerie.  Aden and Quinn are both polite, and quiet, and at the dinner table are very still.  They think carefully before they speak, and often don't speak unless they are spoken to.  I'd never really noticed how mature they really are because usually, fidgeting between them, is Mona.  Mona who can't keep her butt on a chair for a whole meal.  Mona who has no volume control.  Mona who likes to get a laugh but also doesn't want to be the center of attention, so she struggles with conflicting feelings of self-consciousness and pride and embarrassment mixed with a crazy sort of showmanship.  Mona is hilarious and life without her is much too orderly and dull. 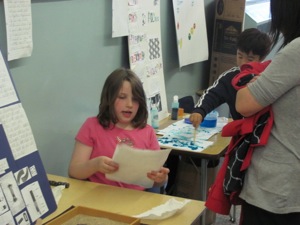 So, Mona's science fair project was a display she worked on with three other kids about magnets.  Her primary contributions were the three pages of written information that she would read to people as they visited the display, and she also made 'metal detectors,' which were these little devices she created out of refrigerator magnets and popsicle sticks that could be used to pull iron filings out of a dish of sand. 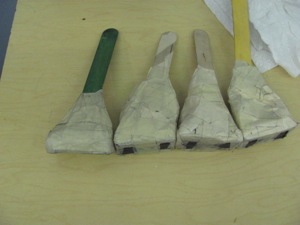 It was wonderful to watch Mona work with both children and adults, happily sharing all she'd learned about magnets.  At one point I asked her if she'd like to take a break and get a treat from the bake sale, but she was more concerned about getting a chance to see her sister's vibration display on the floor above, which I thought was very sweet.

But the best moment of the science fair was when Mona read her whole report about magnets to some random mom and when she got to the end she looked up and asked, "Do you have any questions or compliments?"

Questions or compliments!  I suppose she meant 'comments' but Mona is more inventive with language than her siblings.  Aden and Quinn have large vocabularies and they are cautious about using words properly, which I think is great, but Mona has a large vocabulary too, she just plays fast and loose with it.

Questions or compliments.  Yes, Mona, I have several of each.
Posted by Korinthia at 7:26 AM