Quinn is good at maps.  He gets this from his father.  He most certainly does not get this from me.  I have tried for years to learn some basic geography and I am still surprised every time I look at a map at where everything really is.

This is Quinn at 18 months old (still wearing a diaper) putting together a map puzzle of Asia by himself, happily naming each country in his baby lisp.  (The joke for a while was, "Oh, he's probably just reading it.") 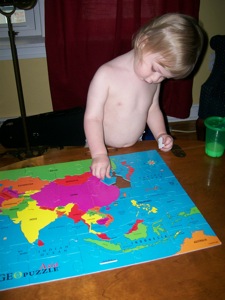 I picked up the puzzle on a whim at the local natural history museum one afternoon because he seemed interested.  I didn't expect him to master it in a couple of days.

For Christmas my parents got him the Africa puzzle, which he also learned in a couple of days.

So of course we got him all the puzzles.  The only one that bored him was South America, and I think that was because in order to fit nicely on a square the puzzle has a lot more ocean than any of the other map puzzles.

In any case, Quinn loves to learn things, and he will focus intensely on something for a stretch of time, and then just let it go.  Which is what happened with the maps around age three.  He was doing the Europe puzzle at the violin store almost daily when he spent his mornings there with me while his sisters were at school and his dad was in Iraq.  Then, one day, that was enough of that.  No more maps.  He was only interested in things that were purple.  Then he was into planets. 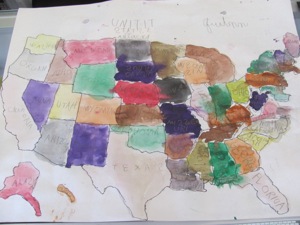 But recently at school, where he is a K4 in a mixed age Montessori classroom, he started working with maps again.  They have sets with pieces the kids can trace to make their own maps of different areas of the world.  Quinn got inspired and made me one of the United States, one of South America, and one of Africa.

I don't know which I like better: The actual maps, or the smile on Quinn's face when his dad brings him by the violin store after the half-day pickup and he says he has a surprise for me in his backpack.  (Okay, the smile, but the maps are awfully cool.) 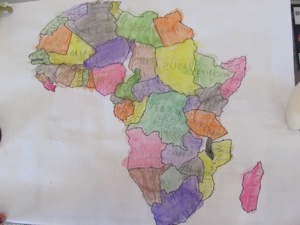 Anyway, the school maps inspired Quinn to dig the old map puzzles out of the game cabinet, and he was familiarizing himself with all the countries of the world again.  (And this time he really was reading the words on the pieces.)

Then one evening I came home from work to discover that Quinn had dumped all the map puzzles into a single heap.  The puzzles take me forever and I have to keep referring to the pictures on the boxes, so I have always been very careful to make sure we put one away before we get out another for fear of a time consuming mix up.  Seeing all the countries of the world scrambled together put me in a mild panic.

I offered to start helping Quinn sort them out, and began picking out pieces of the United States and Canada and putting them in pile.  And my poor boy started to quietly cry.  I froze.  Then I scooped him into my lap and apologized.  Just because I assume something needs fixing because it makes me uncomfortable doesn't mean that that's true for anyone else.  I had interfered in something that I shouldn't have, and since my son loves me he can't just yell, "No!" to make me stop.  I had to make myself stop.  And I left him and the mixed-up world alone. 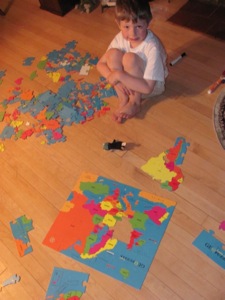 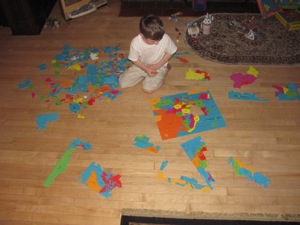 Not that Quinn leaves me alone.  He would pick at the puzzles a little in the morning before school and again in the evenings before bed, all the while chattering away at me as I did my own projects at the dining room table or in the living room.  And after a few days he had sorted out everything. 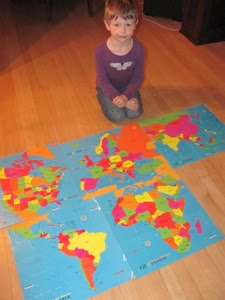 I don't know.  The kid is smart enough maybe by the time he's finally in full day kindergarten he'll figure out how to fix the real one.  Let's all just be glad that he uses his powers for cuteness instead of evil.