(I tried to think of a clever title, but really, that sums it up.)

Whew!  So, how is everyone else doing after the big storm?  (And I’m not talking to any smug people out there on warm beaches or someplace that missed the fun, because, well, I’m pretending we’re all in the same boat and that that boat is covered with snow.)
School was out, our street didn’t get plowed until very late so there was no way to get to work, and any plans to swim got swapped with shoveling for exercise.  But we had a good day.  I’ll write more about it in a second, but first, pictures!  (Because what fun is there in talking about a snowstorm without pictures?)

We will not be using this door to the garage until Spring: 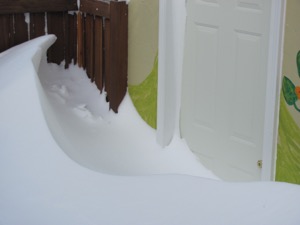 And the front door was no picnic to dig out, but we need that one, so after I found the stairs I got that all squared away: 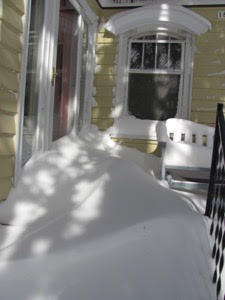 And this was the view of our house across the intersection.  If the railing and the headstone weren’t there I wouldn’t have known where to start digging for the sidewalk: 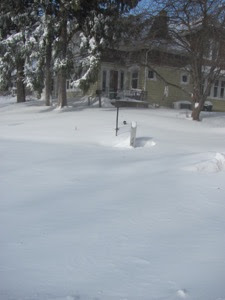 So the first order of business the morning after the storm was to look out all the windows and marvel at just where the snow was really high.  This was out our side window by our neighbor’s house (that’s all from drifting, not digging out): 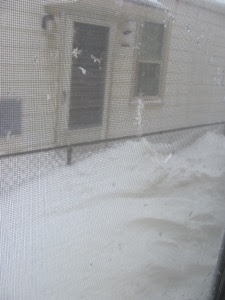 Next, after feeding kids, was to head out and start clearing things up.  Which is actually pretty fun.  Ian and a couple of other people on our block got out snow blowers and started clearing the alley and all the sidewalks. 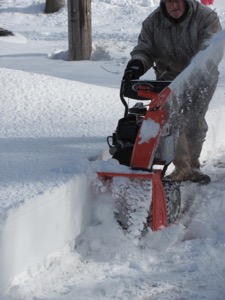 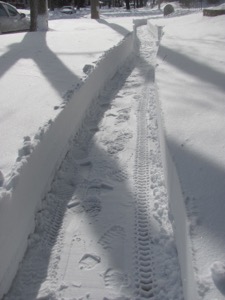 My neighbor, Julie, and I were just armed with shovels, so after clearing our own walkways went across the street to help over there.  It was funny shoveling my old corner.  I spent ten years clearing snow over there, so it was certainly familiar.  And my new neighbor in our old house was grateful for the help because there is a lot to shovel when you live on a corner.  I am a believer in random acts of shoveling, so I worked my way about five houses down until I connected with someone else’s path.  The snow was too deep to simply scoop straight from the ground, so it had to be tackled in layers.  And the funny part was that Julie’s dog, Toby, waited patiently as we cleared the sidewalk as if he had somewhere to be, advancing slowly with each new bit of exposed concrete. 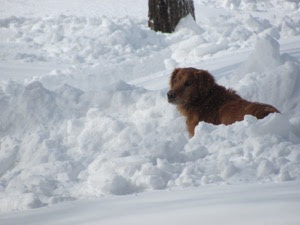 I just assumed my kids would be all over the crazy blizzard adventure and don their snow pants as soon as they saw the winter wonderland that our yard had become, but they settled in to watch cartoons and were quite content to let the grownups brave the snow.  After a little while I decided they really needed to come see it all for themselves and asked them to come out.  Mona was all for it, Aden was skeptical, and Quinn looked at me like I was insane.  He snuggled down under a blanket and just shook his head.  But my intrepid Mona literally dove right in! 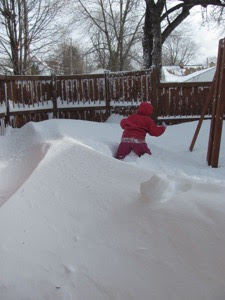 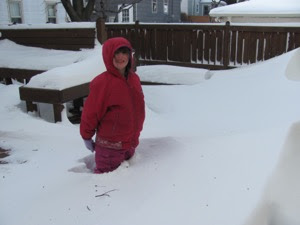 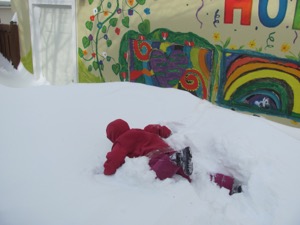 Aden complained after a moment that there was snow in her boots.  So then she grabbed a small shovel and tried to dig her way around the yard which was not really all that fun, so she soon retreated back inside. 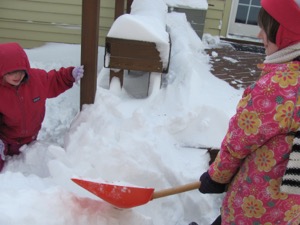 Not that this is actually the biggest snow storm we’ve ever had to deal with.  We were living in Pennsylvania during January of 1996 when we got more than 30 inches in one night.  THAT was impressive.  It took us eight hours to dig out our car.  (It took us a long time just to find the car.)  The problem shoveling then was that there was nowhere to put the snow.  The buildings came right up to the sidewalks and the sidewalks were right next to the streets.  We had to walk each shovelful of snow down the block to dump it somewhere that wouldn’t be in the way.  The snow had to get piled straight up in most places, so walking around town was complicated because we couldn’t see over the eight foot walls of snow on either side of the sidewalk and it was easy to get lost.  The storm happened on January 6th and our street didn’t get officially cleared until Valentine’s day.  That was wild.  This merely shut things down for a day.  (I’m such a jaded old person now!  “Why, back in MY day….”)

So anyway, the lessons to take away from the big storm are:  It does pay to go to the grocery store beforehand if you get the chance, because being stocked up on bread and eggs, etc., makes being snowed in a lot better.  A warm hat helps.  Working together with your neighbors makes the whole world seem like a pretty nice place.  Always be friendly to the guy on your block with the snow blower.
Posted by Korinthia at 3:25 AM