Be Careful Where You Hide Your Frogs (Babble)

There is a really nice natural history museum here in Milwaukee called, simply, “The Milwaukee Public Museum.”  It took me awhile when I first moved here to figure out what a “Public Museum” was, but now that I have kids we know it very, very well.  My kids have loved it since they were babies and it’s a nice place to spend an afternoon with children and not get bored.  There is a room of live butterflies, A ‘Streets of Old Milwaukee’ area, and displays about people and animals from all over the world.

My brother, Barrett, who used to work as a model maker for The Museum of Natural History in New York, says our museum is a mecca, of sorts, for people interested in museum displays because it has a famously large number of open air exhibits and is home to the first diorama constructed by Carl Akeley (dubbed the father of modern taxidermy).  Apparently we have the famous muskrat exhibit.  In honor of my brother my kids and I always stop to admire it on our way to see the dinosaurs or the rain forest.  In any case, there is your bit of history for the day, and now when I refer to the Public Museum in the course of this post you’ll know what I’m talking about.

My kids with the Carl Akeley muskrat display: 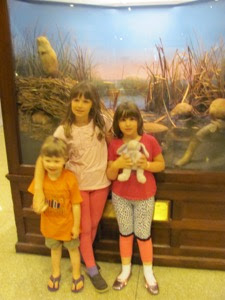 Quinn in the butterfly wing: 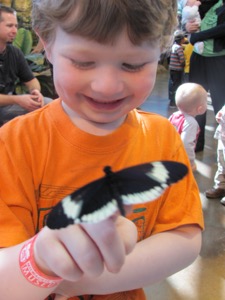 The last big event we attended at the Public Museum was the traveling show on frogs about a month ago.

It was great and we all enjoyed it.  I learned all toads are frogs (but not all frogs are toads) and that apparently the terms ‘poison dart frog’ and ‘dart poison frog’ are interchangeable because we saw it both ways on official looking information.  We saw many frogs, and then on our way out through the gift shop my children all wanted to get something.  Having just cleaned their rooms and seen first hand how many toys they already owned I was not in a mood to add to that collection, but it had been such a nice day and they had been good and weren’t begging or whining, so I said they could get something to share.  They agreed on a tube of one dozen small plastic frogs.

Here they are looking as if they are unconcerned that they are about to be trampled by bison and horses, and Quinn is holding the tube of frogs:

They loved their frogs, played with them for a few days, and then when their dad was cleaning up one evening the frogs all ended up arranged on a shelf in the dining room in two little rows.  They looked cute there, 12 little frogs all lined up.

But then Quinn got on a scavenger hunt kick.  He likes to hide things in and near the living room, and all the things have to be part of the same category, like markers, or balls…. Or frogs.  Quinn pulled a chair up to the shelf and collected the frogs and asked me if I wanted to do his scavenger hunt.  It’s very sweet, because he’ll happily just tell you where everything is, or he’ll give hints like, “It’s under something!”  He just likes hiding things under pillows or in cups or shoes.  There were many many rounds of frog scavenger hunt for the next several days.

The only problem was after every hunt there were fewer and fewer frogs returning to the shelf.  Quinn never kept track of where he hid them all, but would happily hide the remaining ones again and again.  Eventually we were down to three frogs.  Three frogs!

Well, recently I went on a couple of big cleaning sprees downstairs.  Each time I would uncover missing frogs, tucked into spare shoes or onto out of the way window sills or among books or magazines.  Before a meeting of Aden’s book club the other day I was particularly thorough and found a few more.  And I grouped them all together again.  And they looked like this: 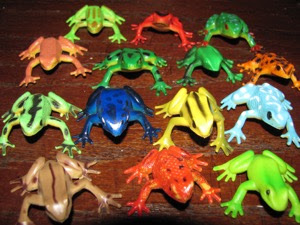 Do you see it?  That’s 14 frogs.  14!  We are now up by two frogs.  This is either a testament to how well I clean, how fertile even fake frogs can be, or that my children’s taste in toys extended to small plastic frogs before the show at the Public Museum.  I suspect the last one.

I remember when we first bought the bin system we use for organizing toys (instead of one giant box which was getting problematic) and I started separating them into categories.  A bin for cars, a bin for balls, a bin for doll clothes…. And to my surprise we needed a large bin just for toy snakes.  My kids own dozens and dozens of toy snakes.  Big ones, tiny ones, stuffed ones, plastic ones, wooden ones…. I had no idea how often we were indulging our children in some kind of serpent obsession.  So I guess I shouldn’t be surprised that we’ve gotten plastic frogs before.

But if their numbers keep growing in the dining room, it may be time to bring some of the plastic snakes downstairs to thin the colony.
Posted by Korinthia at 11:19 PM