I think most of us, if pressed, would admit to having something we care about enough that it counts as an obsession.  Not necessarily to the point of a disorder, but something we know we attend to in a manner that is out of proportion compared to what everyone else around us seems to do.  I think this tendency can either be exacerbated or broken when one becomes a parent because having children forces you to reexamine many priorities.

I bring this up because I just finished working on my latest stack of photos, which is one of my running obsessions.  Many years ago after college while I was packing to move I began sorting through boxes and boxes of photos.  I was surprised at just how many images were of events that I was sure I would never ever forget, but then I couldn’t even pin down what year they were from.  I love having photos of people and places that interest me, but digging through heaps of pictures in boxes was unpleasant.  I decided right then that if I were going to bother to take pictures I needed to start marking them and putting them in some kind of order.  I went out and bought albums and spent a week sorting through all the pictures and labeling them and putting them where I could find them again.

I became extra diligent about this once I started having children, which is good because I apparently only make one model of kid and their baby pictures are very hard to tell apart.  I also paid attention to all the stories I heard from people who took a million photos of their first child and fewer and fewer of each subsequent child, so I made sure there is an equal number of too many photos of all my kids.  I’m not to the point of doing any kind of attractive scrap-booking or anything that elaborate, but all my kids have labeled and dated pictures in albums, and that makes me feel good.  I’m sure I’m messing other things up, but the photo thing I’ve got down and they can’t accuse me of not documenting their childhoods.

It’s funny to me when I think about how reluctant I was to get my first digital camera.  We bought one on a family trip when my regular 35mm Kodak bit the dust, and from the first shot I realized what an improvement it was.  I remember having the thought that I would miss the surprise of getting my photos developed and seeing what I really had, but from that initial photo of me and Mona where I could look at it right away and know if our eyes were open or the composition was off was terrific. 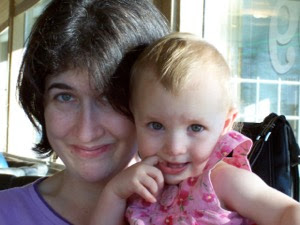 I love having access to images (like that one) right on my computer, and that the information about the dates they were taken is so easy to find.  I used to sit with a calendar when I labeled Aden’s baby pictures and try to remember exactly which day we went to the zoo or museum.  Someday I hope to take some time to scan all my older photos into digital form, but that won’t be for awhile.  (That sounds like a good nostalgia project to do when my kids are much older.)

In any case, I talk to enough other parents about how they never get around to printing out pictures, let alone put together albums, that I always feel a bit self-conscious about my obsession.  It’s just that I know how much I like having real photographs to hold and look at to help me remember things, and I think one day my kids will appreciate being able to flip through whole albums of themselves when they were young.

Anyway, one of the casualties of the readjustment period of having Ian home again was that I got obscenely behind in the whole photograph thing.  I try to be in a habit of emptying out my digital camera about once every month, so that way there isn’t too much to do.  And labeling photos (and sorting out doubles to mail to friends and family) is an easy activity for when I’m stuck in the house.  It’s the kind of project that I can do in the room with the kids while they do their own things and I can stop and start as they need me without a problem.

But with Ian home I’ve been able to escape the house more, and those stretches of time to do my photo thing kind of evaporated.  So the stack of photos I “needed” to attend to went back months and was probably about seven inches tall.  It’s those moments where I’m drowning in photos that I wonder if it’s worth it.

That’s the thing about feeling a bit obsessed–you can’t just take it or leave it.  The photo thing is not that casual for me.  I can’t leave it.  So I stayed up late and sacrificed my day off for building my own instruments just to get caught up.  I like the feeling of being caught up.  The problem is I seem to choose any number of projects that never feel like they will be caught up, and I then I try to decide if they mean enough to bother worrying about them.

The other big one for me that seems to hang over my head all the time is that I write a letter to each of my kids on their birthdays about what they were like for the past year.  It’s a place to stick all their cutest quotes and record all their firsts and describe where they’ve been, who they’ve met and what they’ve done.  It’s a nice idea, and I like the letters I’ve written and tucked away to give them when they turn 18, but the process got really botched with the deployments.  There just wasn’t enough time for everything when Ian was in Iraq, and the letter project was hit hard.  Several of the letters are in rough outline form with chunks of detail that need serious editing, and it’s something I need big blocks of time to read through and sort out.  I sat down to write Quinn’s latest letter on his birthday this week (my baby is four!) and realized to my dismay that last year’s letter is still a mess.  I thought I’d at least gotten caught up with Quinn, but no.  It’s depressing.

And I know this is a pressure I’ve invented to put on myself, and that no one is requiring this of me, and I could just let it go, but I don’t want to.  It’s something in my head that I care about, and I feel as if with the right determination I could do it.

I wonder why some things we can let go and others we let have power over us.  I used to be particular about setting silverware correctly, but since having kids I don’t care.  I notice when it isn’t “right” but it doesn’t bother me.  Whatever weird arrangements of spoons Mona or Quinn lays out is fine.  Adjusting to life with kids has meant learning to relax my attitude about a lot of things, but the few places left for me to channel my more obsessive energies I am keenly aware of.

Does anyone else out there have obsessive arbitrary projects that they question from time to time?  Or am I just trying to make myself feel better by presuming other people do their own version of this too?  I’m curious to know.
Posted by Korinthia at 10:18 PM