Today was all about baking.  If I’m on some kind of serious baking deadline I have to kick everyone out of the kitchen so I can be more efficient, but whenever possible I try to leave the whole day open for baking so my kids can help, too.  If there is time and space to make mistakes, then baking with my kids is a lot of fun.

There are lots of skills I want to make sure my kids have under their belts before they head out into the world on their own, and baking is one of them.  I’ve often been amazed by how many people I run into, some of whom are good cooks, who are intimidated by baking.  I never have been.  That’s not to say I haven’t had my share of disasters (Quinn’s recent birthday cake involved much airing of smoke out of the house), but that’s just life.  For the most part I bake fine, and I want my children to know how to make cookies and cakes from scratch if they feel like it.  So far they’re on their way.

My most intrepid baker is Aden, who has been making cookie dough almost entirely on her own since she was four.

(Aden with one of the first cookies she ever made.) 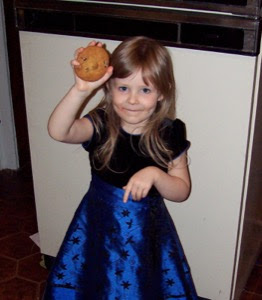 She likes to experiment, and even came up with an odd cookie during the summer with a friend of hers that had marshmallows in it which melted into weird craters all over the surface of the cookie.  They tasted pretty good, though.

Anyway, I had a talk with her again today about some baking basics, like creaming the butter before adding the sugar, and a little about respecting the chemistry of baking so that she keeps the proportions of things right.  I reminded her about not dumping in big cups of flour all at once to keep it from flying everywhere, and to remember to scrape the bottom of the bowl.  She knows all of that, but I’m her mom so I have to say something, and she listens politely.

Aden and Mona are both good at cracking eggs (I usually have them do that in a separate bowl so I can inspect for bits of shell even though most of the time they crack clean), and I feel bad that Quinn hasn’t mastered that yet but there is so much competition for cracking a couple of eggs that he gets edged out.  (We’ll have to make omelets for lunch sometime when his sisters are in school.)

Today’s baking was in preparation for next weekend which is when we’re going to my grandmother’s memorial service.  My grandma wanted to be cremated, so there was no rush to burial after she died.  We’ve had some time to plan which I think has been good.  I’ve prepared some music to play on my viola while people are arriving, most of it pieces I used to practice at her house on the weekends when I was in college.  At first I was worried that I might be too distraught to be able to play well, but now I think I will be glad to have something specific to do.  My grandma was important to me and I wanted to do something for her service, and music seemed like the appropriate contribution for me to make.

However, big family gatherings, whether in celebration or mourning, mean food.  And it’s hard to get away from the fact that this time of year is also when grandma did most of her baking.  For Christmastime to feel right to me it needs to include my grandma’s cookies and stollen.  I decided the best way to remember grandma at her memorial would be to make some of the desserts that I associate only with her.  This coming weekend is also Mona’s birthday party and I promised her I’d make a dragon cake (which sounds involved, but I’ll figure something out), so I wanted to get as much baking for the memorial service done today as I could.

The things that would keep best are the spritz cookies and the stollen, so those are what the kids and I tackled today.  Spritz cookies we make regularly.  Grandma showed me exactly how she made her wreath and tree cookies many years ago.  Spritz cookies are crisp little butter cookies that you squeeze out of a cookie press.  Grandma’s was incredibly hard to use, and she told me not to carry on that annoying part of the tradition but to get one of the more modern ‘gun’ shaped styles which we did.  For Christmas she would make little wreaths sprinkled with green sugar and decorated with two tiny bits of red candied cherry for bows.  The trees she sprinkled with tiny colored balls.  There are lots of other shapes that come with the cookie press, and we have lots of different kinds of sprinkles in our decorating arsenal, but I told the girls for this particular batch of cookies I wanted them just like their great-grandma used to make.  Aden helped me mix the first batch of dough, and then when I needed a second one she did it completely by herself (even doing the math correctly to double the recipe).  Mona decorated all the wreaths, and Quinn did a tray of trees.  I should have enough to give a box to each of my uncles and cousins at the service, plus a plate to have out for everyone.

The stollen was a funny experience.  For those of you not drowning in German heritage, stollen (pronounced ‘SHTUH len’) is a bread-like little cake with dried and candied fruits inside and topped with a simple sugar frosting.  I don’t know if anyone in the family actually likes stollen, but if there was ever a year to break out grandma’s recipe and make it, this seemed like the year.  I remember grandma’s stollen at Christmastime being something we kind of ate while we played cards because it was there.  It had those weird red and green candied cherries on it.  It wasn’t bad, but I never craved it.  This year its nostalgia value outweighs everything else about it, so it’s baking as I type.  It takes forever!  I’m amazed grandma took the time to do it.  It has yeast in it, and you have to scald milk and add sugar and everything rises for a couple of hours, and then you add candied cherries and spices and raisins (and citron which I didn’t have so I left out) and let it rise again, and then you knead it and cut it into three loaf pans where it’s left to rise again before you can finally bake it.  One loaf I’m going to share with my kids this week, and the other two will go into the freezer before the drive to Ohio.

My hope is to bake two more of grandma’s cakes right before we go.  One is called a Jersey Coffee Cake that’s made with sour cream and cinnamon and pecans and was the kind of thing she used to make when her bridge club was coming over.  The other is a coconut cake that kind of screams of the era when my grandma learned to cook.  The first ingredient is yellow cake from a box.  There is a strange step of poking the cake to death with a fork and then pouring a heated mix of coconut, sugar and milk over the top of it.  Eventually you top it with cool whip mixed with coconut and then top that with more coconut.  Sounds odd but it’s delicious.

There are few ways of conjuring up old memories better than with food.  I hope these foods help other people at the memorial service to picture grandma more clearly even though she’s gone.

And in the spirit of sharing and cooking, I want to pass on my grandma’s pie crust recipe for anyone out there who may want to use it.  We make quiche regularly, and I always like to have crust on hand in case I need to throw together a pie at the last minute, so we use this recipe a lot.  It’s a pie crust that you can store in the freezer so we always have some on hand.  It’s convenient and it tastes good.  I have no idea where my grandma got it from, but here it is:

Once it’s all kneaded together (we do all of it in a Kitchen Aid) cut it into 4 equal parts.

Wrap each ball of dough with some plastic wrap and then again in foil for freezing.

It thaws in less than an hour usually, but I’ve even warmed mine up in the microwave for 20 seconds and it works fine.  You can roll it out or just press it with your fingers into the pie plate.

I know pie crust purists who don’t believe in over handling dough and that people can be scared of shortening anymore, but for us it’s convenient and tasty and it reminds me of my grandma every time we make it.  Maybe someone else can use it to start some new memories!  How nice would that be?  Happy baking.
Posted by Korinthia at 10:05 PM