Days With My Little Guy (Babble)

School has finally let out for the summer here.  In the last week Aden’s class did their annual Cosmic Creation Opera on stage (my daughter was a yellow blob this year–I’ve never been more proud).  She brought home lots of artwork and more paper in her tattered backpack than I know what to do with.  We gave Mona’s teacher a small gift and some flowers because in the fall Mona will be moving on to first grade.  In Montessori school you stay with one teacher for three years, so moving on to a new classroom is a big deal.  Mona’s nervous, but she’ll be fine.  She’ll have all summer to get used to the concept.

We’re ready for summer break.  I know people periodically review the merits of year round schooling and say that summer vacation is outdated and in some ways detrimental, and in part I agree with the logic, but in my heart I favor the break.  Maybe it’s because I’ve always lived in the midwest where the summer months feel so radically different from the rest, but the fall and winter schedules don’t work well when the daylight stretches on so long and everything about the world beckons you outside.

I’m a productive person, but I’m also a creative person, and I know the value of being able to lounge around in an unstructured environment.  Long lazy days give you time to let ideas settle and shift around and become something new.  I love my memories from my childhood of actually being bored over summer vacation.  It was different from being bored now.  As an adult I’m only bored when I’m stuck someplace I don’t want to be without a book or a sudoku puzzle, and it’s irritating because I know there are other things I could be getting done elsewhere.  As a kid there was nothing else to get to or do.  (Except clean my room or do something useful, but that doesn’t occur to a fifth grade solipsist.)  Life, even at its best, is hard, so I want my kids to play while they can so they can look back on growing up in Milwaukee and say to themselves later, “Wasn’t that nice?” 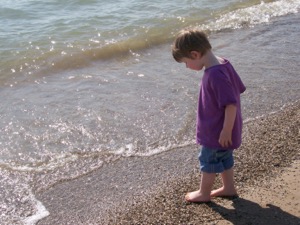 I’m glad I don’t have to try and get everyone ready to leave the house so early in the morning for awhile.  It will be nice to go to the zoo or a museum if we feel up to it, or just play catch in the field behind the house until the sun sets if we want to.  There are concerts in the park to hear, ice cream trucks to chase, fireflies to capture, and puddles to stomp in.  When we’ve had our fill, fall will come around and structure will start to look appealing again.  But for now, despite the challenges ahead of working with all the kids home, I’m ready for summer.

The only real loss for me with this break is my time alone with Quinn.  He’s been my constant companion, and even though the occasional tantrum at the violin store when I’m trying to work has made me doubt if having him with me all the time has been the right decision, I’m lucky to have had him to myself for so long. 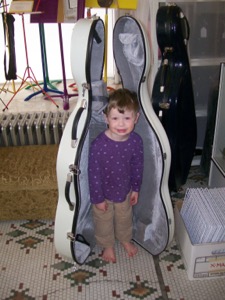 Lately at the violin store Quinn has spent his time on the computer.  He plays the Fetch games on the PBSkids website while I rehair bows and repair instruments.  He has his own routine there at the store, munching on goldfish crackers and playing with blocks.  I don’t get to interact with him much while I’m working, but it’s nice that he’s in the same room. 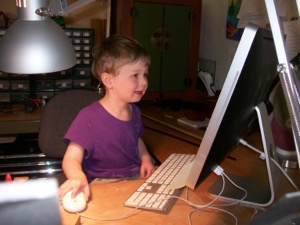 I try whenever possible to take him out somewhere if I can.  He knows the natural history museum here very well.  He likes to sit in the butterfly room and hold out a tentative finger in the hopes a tiny butterfly will land on it, but if one ever did I’m sure he’d freak out.  He tells me to hold out my finger too, and I’m supposed to catch a big one.  The one time I did he couldn’t wait for me to let it go. 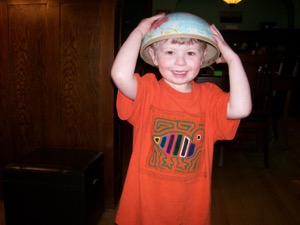 But my favorite days are the ones where I don’t have any appointments at the store and we just come home after dropping off the girls at school.  It’s quiet with just my little boy here.  We go online and look at pictures of Jupiter and Neptune (the only planets with eyes, he tells me).  He lays out toys on the floor and asks me to click on one, whatever that means.  (About half the time I select something he tells me it’s “not availble.”)  We snuggle.  We read books.  I’m not allowed to sing or play music, but he likes to put CDs in while I work in the kitchen.  His favorite tune of the moment is ABC by the Jackson Five, and when his sisters aren’t home to complain we can just leave it on repeat for as long as he likes.  He’s a good eater.  He’ll help me make things for lunch like pasta salad that I know his siblings would never touch.  I love my lunches at home with Quinn.  He plays in the sandbox while I work on my own projects, and if he can sucker me into pushing him on the swing he will happily swing back and forth forever.

Most mornings at home we spend a lot of time going around the block.  I bring a plastic bag with me and pick up trash to keep myself occupied.  (Why don’t smokers think tossing cigarette butts on the ground is littering?)  Quinn just pedals away on his trike, the happiest little boy you ever saw.  He collects important leaves and sticks and puts them in the little compartment under the seat. 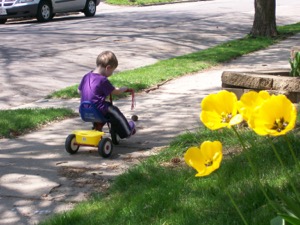 He’s a sweet little guy, but particularly when it’s just the two of us.  I feel so privileged to get to see a side of him that is just for me.  Quinn has spent all but a total of a couple of weeks of his life at my side.  He still sometimes crawls into my bed at night and snuggles up.  When he needs a nap he climbs into my arms.  I like being his home base.  When he wants to hold my hand he grabs onto just my pinky.  He’s gentle and dear and when he laughs I feel like in that moment I understand something important about life and that it’s wonderful.  His smile makes me melt every time.

I don’t mean to make it sound like there aren’t moments he makes me nuts.  There are too many mornings where we’d all be better off if I could let him sleep in so he wouldn’t be cranky, but I’ve had to drag him out of bed to get his sisters to school.  Most days he adapts fine, but on the days he doesn’t he’s made trying to get any work done at the violin store impossible.  I’ve had to turn away business just because a lunchtime appointment when I run out of food for Quinn at the store is too frustrating to deal with.  But on the whole Quinn is a remarkably easy kid.  Way better behaved than the average child, so when he does have an outburst I have to remember he’s just acting his true age.  And three is cute cute cute, but really difficult at times.  There is nothing quite like the petulance of a three year old who hits a combination of  hungry and tired that is beyond all reason.  But he won’t be three for much longer, and I try every day to appreciate the sweetness of this age.

He’s taller and leaner than he was when his dad left.  He still has baby fat in his cheeks, but nowhere else.  I can learn to share him when Ian gets back from Iraq, but I’ve enjoyed having my little guy to myself.  I try to picture him as a man one day, maybe able to lift me in his arms the way I currently lift him.  It’s hard to imagine him heading off into the world without me, but if I do my job right that’s where we’re headed.  This chapter of our lives where it’s just the two of us together most of the day is over beginning with this summer vacation.  He runs off to join his sisters’ games each morning, and in the fall he starts school.  I already miss him. 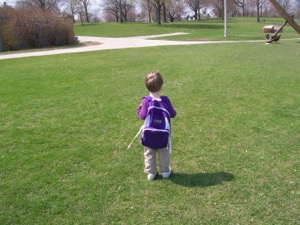