It was hard taking Ian to the airport.  I didn’t want him to go.  Two weeks of leave from the Army went by too quickly, especially since half of that got sucked up by travel to New York.  I’m really glad Ian was able to go with us on that trip, but part of me wishes the two events hadn’t overlapped.  The trip to see my brother was supposed to be a nice distraction from Ian being away, so obviously with him along it became something else.  It was great, and I’m glad he is a part of those memories, but we could have gotten so much more done that I need help with at home if we’d stayed in Milwaukee.  I guess what I’m really saying is we needed more than two weeks.  Three would have been better.  A lifetime would be best. 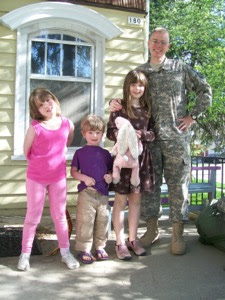 (Mona, Quinn, Aden and Ian on our new porch before going to the airport)

In any case, we had our last few days together in the old house, then we went to New York, then we came home and finally spent the night in the new house.  Ian was incredibly helpful moving the last of the big objects left in the old place.  One of the lovely things for me about having a spouse is that I don’t have to feel beholden to him the way I do with anyone else.  We’re part of the same team, the same life, so when I ask anyone else to move something it’s a favor, but if I ask my husband it’s more part of a long term deal.  It’s his stuff too, so he should be helping move it.  I appreciate him greatly–I don’t mean I take him for granted–but his help is expected in a way that doesn’t apply to anyone else.  If a friend comes to my home and does a chore like my laundry, I would have to keep a running tally in my head so I could adequately return the favor one day.  If Ian does the laundry I can just give him a kiss and not worry about it.  It all balances out as we work together to make our lives run.  It’s part of what makes life easier with a partner.  I miss that.

The trip to the airport was sad.  It’s not even a ten minute drive so the kids barely had time to settle in before their daddy was hoisting his bags out of the back of the minivan and saying goodbye.  Mona and Quinn waved to him from their seats, but Aden’s eyes were full of tears and she had to get out and hug him.  She’d somehow gotten her days mixed up and thought we had one more day with him than we did, so Aden was still in a bit of shock that her dad was actually going.

By the time Ian disappeared inside the airport and we drove away all the kids were wailing.  I gave them a moment to be sad, and then suggested that we go home and put together a package for their dad and see which got to Iraq first.  Ian needed a utility knife at work that he wasn’t allowed to take on the plane so we have to mail it to him.  I got the kids excited about making artwork to add to the box, and now Mona keeps asking me which is winning the race: the box or daddy?  (His flight was stuck in Atlanta the last I heard, so the box may have a shot.) 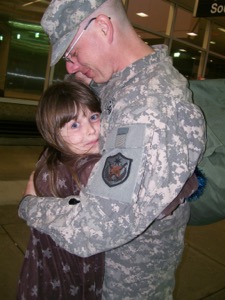 (Aden and her dad at the airport)
After saying goodbye to Ian we ran some errands, and then spent most of the day in the house so I could work on organizing things.  (It’s so amazing to have a choice of closets to put things in!  Now I just have to make sure I can find stuff again.)  The kids watched cartoons and played, and at some point I reminded them that they needed to do violin practice.  Mona volunteered to go first, but then took a turn for the dangerously grumpy.  I made the mistake of correcting the position of her arm (I really should know better than to try to teach my own kids) and that was basically the end of violin practice.  I’m sure a lot of it was just about her dad being gone, but after the goodbyes I’m the only one left around to take her hurt feelings out on.  So violin was a disaster and we both got upset with each other and I left her alone in the living room where I heard her muttering about how much she hated me for a good ten minutes.

I ordered pizza because I wasn’t up to cooking and then I went into the living room to see if there was any way to cheer Mona up.  I scooped her into my lap and told her stories about what she was like as a baby (she always likes that) and made her smile despite her best efforts to keep a mean look on her face.  I nuzzled her and made her giggle, and just when she was starting to really warm up I tickled her and she thrashed the wrong way and BLAM I got a swift knee to the mouth.

Oh my lord does that hurt.  I fell to the floor and clutched my mouth where I could feel my upper lip swelling, and Mona was so freaked out she couldn’t decide whether she should punish me more for making her feel bad about something new, or actually help.  I called for Aden who ran and got me a bag of frozen corn to put on my lip, and after I determined I still had all my teeth and wasn’t bleeding things calmed down and Mona burst into tears and gave me a hug.  Poor thing.  Mona was so nervous I might not love her anymore and I had to keep reassuring her through lips I could barely move that I knew it was an accident and I would always love her.  It must be scary for her to say goodbye to one parent and then worry about alienating the remaining one.  I told her she should add her knee to the mouth move to her arsenal of defense techniques that we talk about in case a bad guy ever grabs her, and that made her happy.  (If someone really had tried to nab her in Central Park that poor fool would have been bitten, kicked and eye gouged beyond recognition.  We have a strict no hurting each other rule in our house, but I’ve told my kids all bets are off against anyone who tries to lead them anywhere that seems wrong.)

Aden’s good in a crisis and made sure to get me ice and refill the ice trays.  She found me some ibuprofen and a glass of water.  She helped pay the pizza guy when he arrived because I looked a little too icky to go to the door.  The swelling has gone down a bunch and I can talk again, but I can’t smile yet.  My kids aren’t convinced I’m not mad about something, so I’ve developed a goofy half grimace to let them know it’s all fine even if I don’t look happy in a normal way.  I can’t decide if wearing lipstick to cover the dark red welt would be more noticeable on me than the welt itself.  I never wear lipstick so I’m guessing the welt is the better look.

So that was exciting.  My lip still hurts, but it’s fading.  I notice Ian’s absence more frequently than I notice my fat lip.  By next week my lip will be fine but Ian will still be gone.  It’s already hard to remember exactly how the knee to my mouth felt when that was happening, but I feel like I relive the goodbyes every day.  That hurt doesn’t fade.

As I sit here in my new bedroom with a view of my old house (and all the things in the backyard I still have to move), I can’t help but think what a double edged sword love can be.  I’m glad Ian was here for these first few days in our new home so that he could be a part of it, but now we’re all aware that a piece is missing.  It’s good we can picture him here.  It would have been very strange to establish a whole life and routine in a new place and then have to find a way to add him later, but it hurts to have a particular spot at the table be empty and know he should be there.

But we’re over the hump, I think.  Ian only has about six more months left in Iraq.  In that time my kids will finish the school year, we’ll sell the old house, I’ll figure out how to run the violin store with the kids along during summer vacation, we’ll proabably do some trips to Michigan and Ohio, the leaves will change and Aden will start third grade, Mona will start first, and Quinn (who already owns a purple backpack in anticipation) will start half days at the Montessori school with his sisters.  That’s enough to keep us distracted from looking too often at Ian’s empty chair.  I’m looking forward to Hello.