I’ve had my first pair of glasses now for a few weeks.  I’m getting used to them, but it’s definitely a lifestyle change.

Apparently what I have is astigmatism.  The eye doctor informed me that astigmatism isn’t something that occurs with age, and that I probably always had it and should have been wearing glasses forever.  Something isn’t quite right about that or I wouldn’t have just recently decided something was off about my vision and I needed to get it checked.  In the past couple of years I noticed that I could see objects clearly at closer distances with my right eye than with my left by about five inches.  I’ve also felt myself heavily favoring my right eye in general, and that small type was blurrier with my left eye when I used it alone.  All those things seemed like good reasons to go to an eye doctor.

My unaided vision isn’t bad, just a little blurry.  The biggest difference I notice with my glasses on is that dark things are darker.  Since the contrast is better, and the lighter areas aren’t bleeding into the darker ones, there is more dark to see.  I didn’t realize how much clearer all the details around me could be.  Some days when I don’t remember to put my glasses on in the morning I wonder again why I have them, but if I’ve had them on all day and take them off I’m surprised by just how fuzzy the world looks.


The super nice woman who helped me pick out my first pair of glasses said I should not go with anything too bold to start.  I like what she picked.  They are light, I don’t notice them much, and supposedly they are hard to break although I hope we don’t get to test that anytime soon.  People who know me best have remarked on them right away and said they look nice (except for my daughters who don’t like them).  Some people have said nothing, and then there is a surprisingly large group of acquaintances who seem to remember me always wearing glasses and don’t know what the fuss is about.  Ian feels like I have a whole Tina Fey thing going, so I’m not going to complain about that. 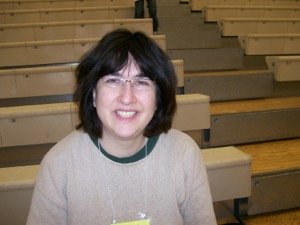 (First picture of me in glasses, taken by Aden when I was doing volunteer work for her choir.)

I thought I would mind how I looked in them, but they’re kind of nice.  I don’t wear makeup or have pierced ears, so by just putting glasses on it’s like I’m making some kind of effort with my face for a change.  I’ve also started really noticing just how many other people wear glasses too.  There are so many types and styles and it’s a whole world I never really paid any attention to before.  I check out other people’s eyewear all the time now.

There are weird things, though, that come with wearing glasses.  Some of these are normal weird that anyone who wears glasses will relate to that I’m just discovering, and some might just be me.

Having the edges of the glasses in my periphery is hard to get used to.  That, and the way things bend around the edges.  That bit of distortion happening just to the side of everything I’m looking at is strange.  It’s a shock to open the oven and have my glasses steam up.  I haven’t figured out yet if there is a way to change my shirt without taking the glasses off first.  I had no idea my eyelashes were so dirty–I can smudge up the lenses with them pretty fast.  I’ve already gotten into such a habit of adjusting my glasses that I’ve found myself reaching to push them up on my nose when I’m not wearing them.

With the new crisper edges to everything, I’ve also had a return to seeing the red and blue lines next to bright objects.  My brother the brain researcher specializes in vision and has done work in holography, so he was able to give me a term for the red and blue edges.  It’s called ‘chromatic aberration,’ and he termed it ‘not desirable.’  I loved the red and blue edges next to things as a kid and I used to amuse myself by shutting one eye and lining up the sight of the edge of my nose against the sides of bright things across the room to make them stand out more–blue on the right, red on the left.  My brother’s concerned that my glasses aren’t adequately doing everything they are supposed to do if I’m seeing all that red and blue, but I think they’re fine.  It’s subtle, and it’s pretty.

I’ve already been warned that someday a small child will elbow me in the glasses and it will hurt.  I have been told that coming indoors with them on in the winter will take getting used to.  I’m already annoyed with the way they slip as I tilt my head down all the time to do my work.  I have been told that dependence on them will be frustrating at times, espeically as they get lost or misplaced.

But you know what?  The first thing I saw with my new glasses was Aden’s sweet face looking up at me.  I slipped them on, and every strand of honey blonde hair on her head was suddenly clear in a way I’d never seen before, and her impossibly blue eyes had sparkly blue rays in them that I find amazing.  She laughed as I kept looking at her over the tops of my glasses, and then nudging them into place so I could enjoy the contrast again.  Who knew I could enjoy looking at my kids any more than I already did?  Glasses are cool.

Email ThisBlogThis!Share to TwitterShare to FacebookShare to Pinterest
Labels: glasses