I’m not sure if this is a phenomenon common to all children, or just my children, but all of my kids put things in things.  It makes life so much more…. let’s go with ‘interesting.’  I can never find anything because my kids are always moving stuff around to put into other places.  When people come to visit and ask where a particular kitchen item might be, I shrug and say, “Your guess is as good as mine.”  My kids routinely swipe things like the tea ball and put acorns in it and then put it under a pillow.  Or fill a small box with googly eyes and put it among my books.  This has not improved as they’ve aged, only expanded their reach to objects on higher shelves.

Sometimes it’s like living in that scene from the movie Poltergeist, where the woman turns her back for two seconds and when she turns around again all the kitchen chairs are inexplicably up on the table.  I took a stack of hangers out of my closet the other day, and then next thing I knew this happened: 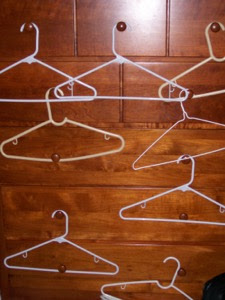 This is making moving especially difficult.  Every time I try to pack something I turn around a minute later to find things have come out of the boxes and been incorporated into some eloborate game involving squeaky pets and a blanket that has been spread out over a large area.  It doesn’t matter how often I tell them not to touch something or stay out of what I’m doing, they can’t remember that for more than two seconds and things end up in things but not in any way that I would find useful.


This has been going on forever.  When Aden wasn’t even two I remember trying to clean up the kitchen and there was a toilet paper tube standing up on the table.  I picked it up to put it in the trash, and it turns out my darling daughter had painstakingly filled it with small beads.  I will never forget snatching up that tube and hearing the tremendous ‘CHHSSHHWWOOOOOOSHHHHHHckkkk k k k k k k ‘ of hundreds of beads cascading to the floor.

There are ponytail holders wrapped to the oddest things, I can’t tie my robe because the belt is used for too many important things (such as tails or vines for swinging from, and the last time I spotted it, it was in the back of the minivan for some reason) and forget keeping the pieces to any game together.  Aden is getting pretty good at chess, but we’re down one pawn because several of the pieces ended up in something at some point and that one white pawn never found its way back.  Hi Ho Cherry-O was decimated long ago because a chunk of those play cherries had to go into something else.  Quinn has been creating ‘parades’ lately, taking puzzle pieces and lining them up in rows that run through several rooms.  Now when we put together Africa we lament the absence of Burkina Faso, and we haven’t seen Iran from the Asia puzzle in a long, long time.  Much of the world ends up in cooking bowls now as my son stirs his global soups.  If we still have all of Canada by the time we get into the new house I will be amazed.

Anyway, I have unrealistic dreams that in the new house I might be able to contain some of my kids’ creative need to rearrange everything to certain areas, but in my heart I know better.  I will set up my pretty house in a way I think looks nice and functions well, but once we are all moved in and I turn my back, I know I will look around again just to see weird things like this that I don’t understand: 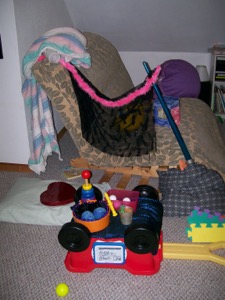 *sigh*
I wonder what it must be like for people who don’t live with children to have everything stay put all the time.  Must be tremedously dull to put your keys on the table and actually have them be there later when you need them.  I can’t even imagine that now, it’s just so far removed from my reality.

I think for my birthday sometime I want a day where nothing ends up in anything I didn’t know about.  A day of no surprises and nothing but boredom sounds better than winning the lottery to me.  In the meantime, at least the little culprits are cute. 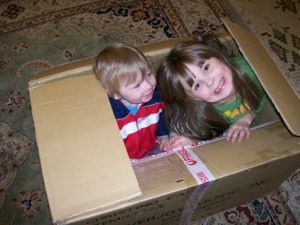 Posted by Korinthia at 8:28 AM