I think there are only a few easy ways to move.  All of them involve either not being attached to a lot of possessions, having a lot of money, or some combination of the two.  You could up and abandon everything because you are really spiritually developed or brain damaged and it doesn’t upset you, or you could not care about any of your things but afford to buy everything again in the new place.  You could love your millions of things and be able to pay some team of people to lovingly pack them all in a matter of hours and completely arrange them in a fresh location while you go off and distract yourself at the spa.  That sounds lovely.  That’s not happening here.

What we have on our side to ease this move are time and proximity.  Those things help, but not enough to put moving from one house to another with three kids and a deployed husband under the category of ‘easy.’   We’ve been at this moving thing now since the first of February, and I’d say we’re about halfway there.  (Maybe a little more than that, but possibly less….  I have no idea anymore.)  In the new house we have all the beds, my entire in-house violin making shop, many odds-and-ends-type storage items, photo albums, all the kitchen stuff I apparently don’t use, everything of Ian’s, art supplies, new tables and chairs, anything we own that resembles a couch, all the books and art, and a lot of toys.  In the current house we have the old tables and chairs, our dressers and clothes, the computers and TV, kitchen essentials and food, bathroom things, all the violins, and we sleep on mattresses on the floor.  It’s like limbo.  We’re moved, but we’re not moved.  We live here, but often spend hours over there.  We’ve reached a point where I’m not sure which house certain items are in sometimes.


However, having a second house across the street is more often than not pretty convenient.  When realtors want to show people the current house we can just dash over to the new house and can see through the windows when the coast is clear.  But because it’s so close, it lacks a certain urgency that would help get the move over with already.  The new house is there, I can see it, some days I never get in it (although I do have to pop over and check the mail) and we have a comfortable routine where we are that is hard to want to mess with.  Little things like shooing the kids out to the car in the morning won’t work the same way at all in the new house, so I’m loath to tamper with a system that functions.

Our current house is on the market and there are showings nearly every day, but there is no timeline for leaving yet.  And the new house is still in the middle of a lot of projects.  Many rooms are nearly done, but nothing is quite finished.  We could live there right now, but I’d rather wait until the outlet covers are back on and all the switches work.

As confusing as living in two houses can sometimes be, I will admit that it’s great to be able to work on fixing something up and making the new house our own while still having someplace else to retreat to when we need a break.  I let the kids help paint their own rooms which I think will make a difference in how they feel about living in them when the time comes.  Aden decided her side of the room would be ‘irresistible iris’ and Mona’s is some kind of blue with the word serene near it.  (Mona wants her side to look like the sea.) 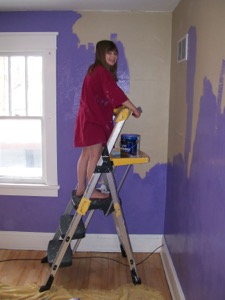 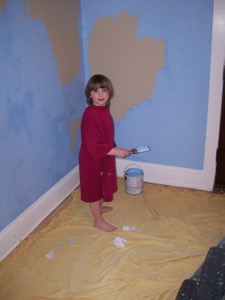 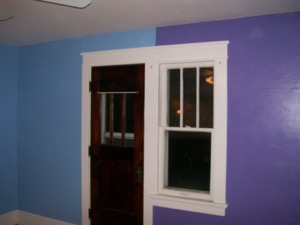 Luckily I think the colors they picked work okay together, although these are not colors I would have chosen myself.  But it’s their room, and at least we didn’t end up with Aden’s first idea which was red with giant white polka-dots which might have given me seizures in the morning.  (The door leads out to their terrace.  They are already completely crazy about the terrace and have had little picnics out there, even though it’s still pretty cold here in Milwaukee.)

Quinn wanted to use the leftover paint from Aden and Mona’s room, and threw in leftover green from the kitchen for good measure.  He has some story about the green being the rain and the purple is the ground….  Who knows?  Looks like a 1970’s daycare center to me, but he likes it and that’s all that matters.  It’s easy enough to change paint one day if he develops a different sense of style later. 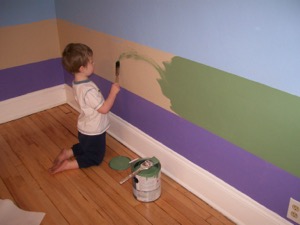 The only sad bit of redecorating so far has been painting over our exisiting kitchen cabinets.  They were covered with Aden’s handprints and Mona’s footprints from five years ago.  Aren’t they cute? 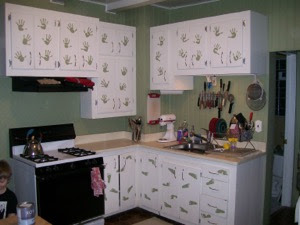 But they are only cute to me because they were done by my kids.  I got some sweet pictures of the girls posing by their cabinets and then painted them over after they went to bed.  I will admit the new look makes the house more salable, but it broke my heart to paint over those little hands and feet. 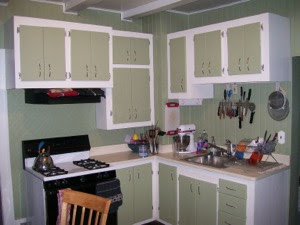 The most stressful element of my life at the moment is trying to keep the current house clean for showings.  That’s hard with three kids, but moving all their toys to the other house helped.  I told them I couldn’t keep picking their stuff up all the time and still be nice, so they were going to have to be content with just a few toys over here.  They agreed, but an hour after I cleaned up the family room I returned to find they had simply made their own toys out of aluminum foil and cotton balls.  They’d constructed lizards and snakes and crazy little structures and I don’t even know what else.  The room was a mess and I was simultaneously impressed and annoyed.

But we’re getting closer.  Ian is due home for a short leave, and the kids and I decided we wanted to spend our last night in the old house and our first night in the new house with him here.  I’m looking forward to that.  And we won’t have to worry as much about their dad disrupting the routine in the new house because there won’t be one yet.  Everything will be new and I’m glad we’ll get to share that.  I wasn’t looking forward to settling into a different home without him, and this way we’ll have his input before we get entrenched in a new way of doing things, so the timing is good.

I wonder how the kids will remember this move.  I moved when I was three and still recall bits of that experience.  Quinn’s that age now, so I bet he’ll remember something about it.  Mona will proabably deal just fine, but with her it’s always unsafe to make predictions.  I’m sure Aden will say something guilt inducing for many years to come as she gazes across the street and recounts things that were better in the old house just out of loyalty to her young childhood self.  The new house is a way better fit for the teenagers my kids will one day be, so I have no regrets.  We will be hosting her next book club meeting over there, and I think having so many friends over will help as she starts creating new memories.

I just hope whoever buys our current house will love it like we have.  I’ve seen several young couples looking at it over the past couple of weeks and I imagine them starting their own little families here.  That would be nice to see.  It’s a good place to bring new babies home to.  I know that first hand.  (And if they ever need ideas for adding visual interest to those kitchen cabinets, I have a few.)
Posted by Korinthia at 12:35 AM