When Valentine's Day sneaks up on you (Babble)

I’ve always liked Valentine’s Day, even though it usually meant finding out no one in my class at school could spell my name correctly.  I loved handing out little cards, and when I had time, making them myself.  Valentines are simple and nice and it’s one of those rare times when you can hand anyone you like a note.  During years when I was too swamped with a newborn around the holidays at the end of the year to bother with Christmas cards, I waited until Valentine’s day to send everyone a letter.  My mom always sends us a Valentine’s box with homemade treats and surprising things.  It’s a tradition I hope to keep up with my own kids when they eventually move away.  (Not that they say they are ever moving–according to them they will live with me forever and ever.)

Normally I help the kids make their own cards.  This is Mona last year at the violin store in Valentine production mode: 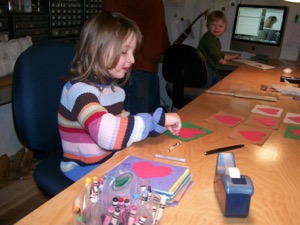 Usually we start talking about Valentines the week before so if there is anything complicated or unusual about what they want to do I can have some time figure out how to make it work.  Last year Aden made pop-up cards all on her own that were pretty cool.

But this year Valentine’s Day kind of took us by surprise.  I was associating it with next week on my calendar because it falls on a Sunday this year.  Then I realized the kids probably would have their Valentine’s party on Friday.  Then I found out there is no school on Friday–so the Valentines had to be done last night.  This did not fit in with my work schedule at all, so we ended up eating at Target an hour before bedtime and shopping for cards and pencils.

Of course, my kids can’t pick out easy cards that you just sign and are done with.  Aden wanted to continue her pop-up theme, and found something with dogs that you had to punch out and fold and attach to the main card.  Those took her over an hour before she ever got to signing anything.  Mona chose something with a rainforest theme that came with little play tattoos that were too hard to attach to the cards herself.  So we all sat together at the dining room table cranking out cards, and it took us well past bedtime but it was nice.

The biggest surprise to me was Quinn, because we set aside cards for their cousin, and when I gave him one to fill out, he correctly printed her name.  I know he’s been working on writing some numbers and letters, but I’d never seen him try something as complicated as an upper case E or an R and he did them really well for age three.  He will love being able to pass out his own Valentines at school next year.

I will admit that Valentine’s Day is one of the holidays where I miss Ian more than usual.  It’s hard having him so far away, and all his stories when I hear from him make me nervous.  I don’t like picturing him with a gun or in dangerous situations.  He seems fine and it sounds like he’s accomplishing a lot of positive things in Iraq, but not being able to give your main squeeze an actual squeeze on Valentine’s Day is lonely.

So this year I appointed Mona my Valentine’s date.  As the middle child I find she’s the hardest one to make time alone with.  I see Quinn alone all the time, and somehow I get moments alone with Aden, but Mona is always along for the ride with someone and private moments are rare.  I told her I would hire a babysitter for her brother and sister, and the two of us would go out to eat and do something special.  That something special will probably turn into a trip to Home Depot for something we need for the new house, but alone with Mona it will be special.  She’s really excited and keeps asking me, “Am I still going to be your Valentine this year, Mama?”  The only tricky thing is to not make Aden and Quinn feel slighted, so I’m trying to find someone to watch them that will feel more like a play date.  In any case, I’m looking forward to Valentine’s Day, even though it feels like my heart is overseas.

I remember talking to Ian about holidays during the last deployment, and he said they were no different from any other days, which in a war is understandable.  He barely noticed it was Christmas and forgot about Easter and Valentine’s Day and our anniversary.  I get that and it’s fine.  But it’s another way in which our experiences while apart diverge.  For us holidays are among the clearer moments when we know exactly what we’re missing.  We get used to the day to day life without Ian here and we miss him in a general sort of way.

But when a day is marked and set apart we all look around and notice his absence in a way that doesn’t happen normally.  When I started talking to Aden about what kinds of Valentines she wanted to pass out this year, she got excited about it, and then got very quiet.  “I miss daddy.”  I told her I know, and I did too, and that maybe the box we sent with his Valentines in it would arrive on time.

Either way, I have a date.  She’s short and missing a couple of teeth, but in lieu of my husband it’s hard to think of a sweeter Valentine to spend my day with. 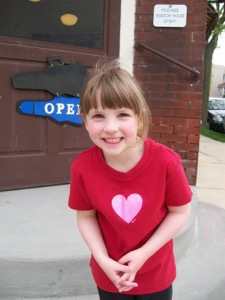